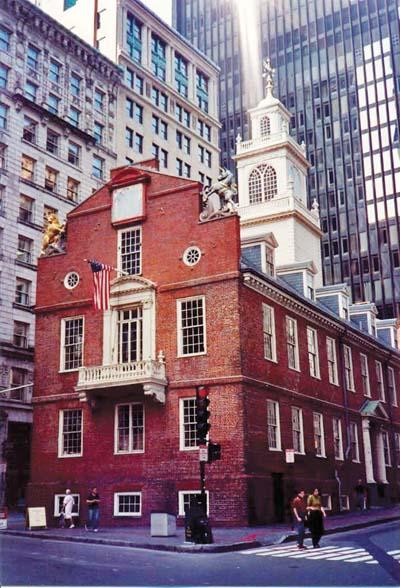 The Old State House in Boston is dwarfed by taller, more modern buildings. 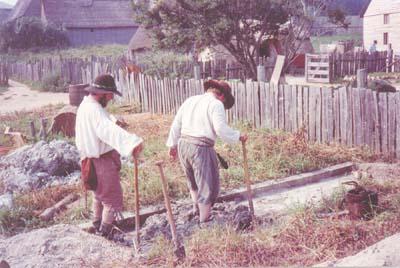 Re-enactors even work the soil at The Plymouth Plantation.
By Lois Hasenfratz

On Labor Day my husband, Don, and I began our venture to New England.

Along the way, we stopped at Niagara Falls, where we spent several hours walking on both the American and Canadian sides.

We proceeded to motor our way through the beautiful countryside and quaint villages of Vermont and New Hampshire. We visited Stowe, a small Vermont skiing town nestled in the Green Mountains and continued on through New Hampshire, where we had dinner and spent the night in an old farmhouse converted into the Amanoosuc Inn.

The next day found us in Kennebunkport, Maine. We decided to explore the neighborhood made up of stately old mansions overlooking the ocean. As we were walking along, I pointed out a beautiful home on a point. There was an American flag on a tall flagpole and some type of protective wall around the compound. Soon we saw tour buses stopping and tourists gawking. We then realized this was the home of former President George H.W. Bush.

After a delicious lobster dinner, we drove to Gloucester, Massachusetts, a fishing port. You may have heard of Gorton's fish sticks from the commercial, "Gorton's of Gloucester." The entire town smells like fried fish.

I saw a sign advertising "Captain Bill's Whale Watching Cruise - Sightings Guaranteed." We took an exciting five-hour cruise and saw many whales, mostly of the humpbacked variety. The famous Fishermen's Memorial sculpture, dedicated to the fishermen who lost their lives at sea, is located here.

We explored on foot the towns of Rockport and Salem, home of the famous witchhunts and the Salem Witch Museum.

In Boston we walked for seven hours on a self-guided walking tour of the city known as the Freedom Trail. We followed the red brick painted lines, which guided us to various spots of interest along the way such as the Granary Burying Ground where Paul Revere is buried; Faneuil Hall; the Old State House; the Old North Church; and Paul Revere's home.

We were able to board the USS Constitution (better known as "Old Ironsides") for a tour. We especially enjoyed our tour of Faneuil Hall. Peter Faneuil, a merchant, built this building in 1742 and donated it to the town. For more than 250 years, the first floor has served as a marketplace and the second floor as an open forum meeting hall. I remember our guide saying it was the first shopping mall.

Because of the protests against British taxation policies voiced here during the 1760s, the meeting hall is dubbed the "Cradle of Liberty."

We stayed at the Capewind Motor Lodge in Falmouth, our headquarters for our tour of Cape Cod. One day we sailed on the Island Queen for a cruise to Martha's Vineyard. I thought the most beautiful spot on the island was the clay cliffs at Gay Head and the Gay Head Lighthouse. In Plymouth we viewed Plymouth Rock (so much smaller than we had envisioned) and a full-scale reproduction of the Mayflower.

The next day we visited Plymouth Plantation, which is a living museum of the first permanent European settlement in southern New England. Here we stepped back more than 300 years in time. The costumed guides assumed the identities of the colonists who actually lived there in the 17th century and spoke the English dialect of that time period. When one of the re-enactors asked where Don worked, I said he worked at a place that made machines that flew like birds.

There are two sections to the plantation: the 1627 Pilgrim Village and the Wampanoag Indian Settlement, which presents the history and culture of the native people who helped the early English settlers get established.

Because we both enjoy cranberries and cranberry juice, we took a short side trip to Cranberry World sponsored by Ocean Spray, an exhibit that traces the cranberry from colonial time to the present. Massachusetts is second in the nation in cranberry production. This exhibit is free.

We enjoyed our self-guided walk on nature trails and walking on the beach at Cape Cod National Seashore. We viewed an exhibit explaining how the Marconi Wireless Station worked. In 1901, Marconi built a wireless station at Cape Cod. In 1974, the National Park Service built an exhibit shelter to house a scale model of the wireless station and a bronze bust of Marconi, along with the commemorative plaque dedicated in 1953.

Our last stop in Cape Cod was the Pilgrim Monument at Provincetown. This monument was erected to commemorate the landing of the pilgrims in the New World. Provincetown is noted for its artist colony.

We drove back to St. Louis via New York City and stopped briefly at Hershey, Pennsylvania, to tour Hershey's Chocolate World and continued through the Pocono Mountains. We thoroughly enjoyed the history and beauty of New England.

The Old State House in Boston is dwarfed by taller, more modern buildings.

Re-enactors even work the soil at The Plymouth Plantation.
© Copyright 2021 STLtoday.com, 901 N. 10th St. St. Louis, MO | Terms of Use | Privacy Policy
Powered by BLOX Content Management System from TownNews.com.
You don't have any notifications.