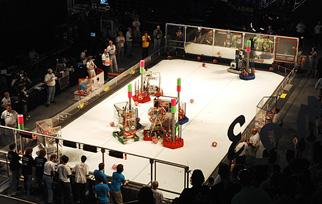 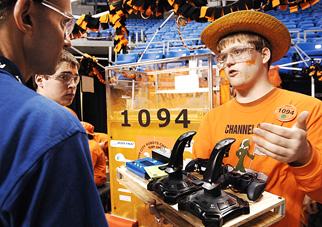 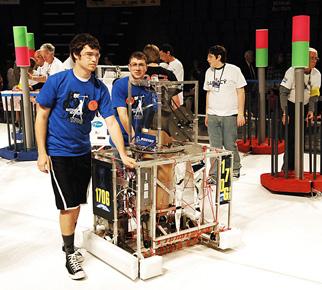 Ryan Prewitt photo Members of the Ratchet Rockers from Wentzville carry their robot from the arena. The team qualified to compete in April at the national championship. 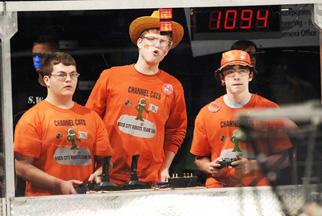 The opponents collided on a white court, frantically throwing balls to score victory before time ran out.

The "athletes" were made of aluminum and plastic, propelled by gears and motors. The robot gladiators fought via remote control, operated by teenagers standing around the court's perimeter.

When the final buzzer sounded Wentzville high school teammates jumped, cheered and high-fived each other.

"This is a dream come true for us," said Clayton Kolkmeier, 18, a senior at Timberland High School.

Kolkmeier is co-captain of the Ratchet Rockers, a robotics team comprised of 25 Timberland and Holt High School students. They were part of a three-team alliance that won the FIRST Robotics Regional Tournament March 21 at the Chaifetz Arena in St. Louis.

The Ratchet Rockers, along with partner teams Bomb Squad from Arkansas and Team Hammond from Indiana, will advance to the FIRST Robotics Championship finals, competing against 25,000 students from across the nation April 16-18 at the Georgia Dome in Atlanta.

"This is pretty amazing. We never thought we would have made it this far," said Timberland senior and Ratchet Rockers co-captain Joe Hoing, 17.

Last year, the team finished 37 out of 46 in the regional tournament. Kolkmeier said the team's breakthrough came when it gained a new mentor - Darrell Wodrich, an IT department manager for Enterprise Rent-A-Car.

"Darrell picked us up and moved us from a low-ranking team to one that has now won a regional competition. We'd be nowhere without him," Kolkmeier said.

Wodrich, 43, said he became the Ratchet Rockers' mentor because his son is on the team.

"I wanted to give them organizational leadership as well as technical leadership, using the technical and management skills I'd gained working for Enterprise," Wodrich said.

The team spent six weeks, working 130 hours to build its robot, he said. At the regional tournament March 19-21, they competed against 56 teams from eight states, including 41 from the St. Louis area.

One was the RAVEN Robotics team, sponsored by the Francis Howell School District and Boeing. Their purple robot used a conveyor belt to pick up balls, or "moon rocks," and throw them in a net that fed them down a chute, where spinning rubber wheels shot them out.

"When people have been working on a problem all day I'll walk in and give it a fresh set of eyes," he said.

Emblazoned with an angry-looking catfish logo, the Channel Cats' orange robot stood out from the crowd. The team is part of River City Robots, a nonprofit organization not affiliated with any school district.

Aaron Heumphreus, 18, a Fort Zumwalt South High School senior, joined the team in 2002 after attending a competition where a robot spread a pair of wings and knocked down a wall. Heumphreus said robotics gave him a new respect for technology.

"This is the driving force for the future of America," he said. "Whatever the next big thing is, these 18-year-olds working on these robots will be the people who will be inspired to build it."

The Ratchet Rockers are seeking $5,000 in donations to pay for registration, transportation and lodging for the finals. The team receives no funding from the schools. The team's fundraising contact is Diane Moran; she can be reached at 636-327-3988, ext. 27519.

Ryan Prewitt photo Members of the Ratchet Rockers from Wentzville carry their robot from the arena. The team qualified to compete in April at the national championship.