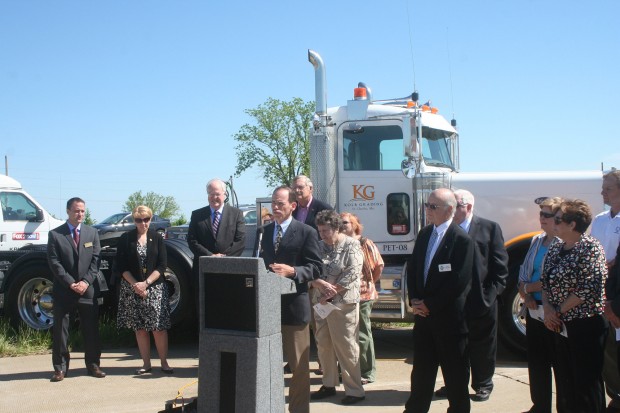 Ed Hassinger speaks during a ceremony to break ground on Phase 3 of the Route 364 extension. 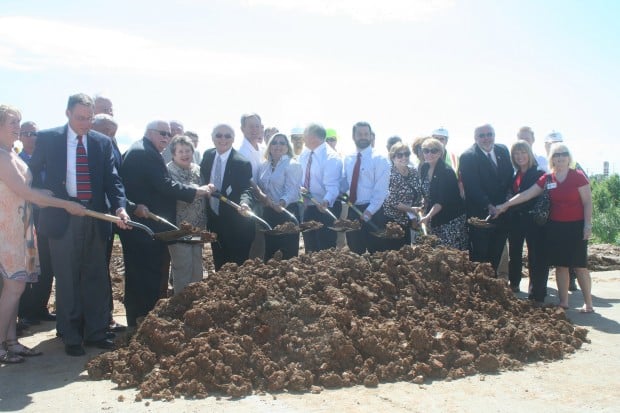 Officials shovel dirt during a ceremonial groundbreaking for Phase 3 of the Route 364 Extension.

Officials came together May 22 to break ground on the final section of the Route 364 Page Avenue Extension in St. Charles County.

Missouri Department of Transportation District Engineer Ed Hassinger, St. Charles County Executive Steve Ehlmann and others gathered for the ceremony at the Interstate 64 and Route N interchange in Lake Saint Louis. The site marks where the final nine miles of Route 364 will end at I-64.

The new $118 million four-lane divided highway will cross through five municipalities in St. Charles County and will include new interchanges at Route 94, Route K, Bryan Road, Henke Road and additional ramps at I-64. The project received $57 million in funding from St. Charles County. O’Fallon contributed $2.25 million to help with additional right-of-way costs, and Dardenne Prairie added $600,000 for improvements at Hanley Road.

“The real important thing that happened here is that the cities got together with the county — everybody put their projects on the back burner for a year or so — and went to East-West Gateway and asked for all the money to be put into this project,” Ehlmann said. “That was the last part of the puzzle, but that’s the part I think is most important, and that could not be achieved without leadership from mayors and various councils in the cities of St. Charles County.”

The design-build project was awarded to Page Constructors. It is a joint venture with Fred Weber Inc., Millstone Bangert Inc., and Kolb Grading, with Parsons Transportation serving as the lead designer. Construction work began this month.

The first two areas for construction work will be at Gutermuth Road in Cottleville and Bryan Road in O’Fallon and Dardenne Prairie.

A short section of Gutermuth Road will close May 29 and remain closed until Aug. 29. Motorists will be able to use Old Gutermuth as a detour. Crews will work at Bryan Road, but MoDOT said construction impacts will be minimal. Within the next month or so, people should see construction activity along all nine miles of the project.

Maps of the new highway design and the interchanges at Route 94, Route K, Bryan Road, Henke Road and I-64 are available at www.modot.org/Route364. Highway K will be expanded to six lanes from Pheasant Meadow Drive to Royallsprings Parkway.

For the third year in a row, St. Charles Community College has been named a Tree Campus USA by the Arbor Day Foundation.

Ed Hassinger speaks during a ceremony to break ground on Phase 3 of the Route 364 extension.

Officials shovel dirt during a ceremonial groundbreaking for Phase 3 of the Route 364 Extension.