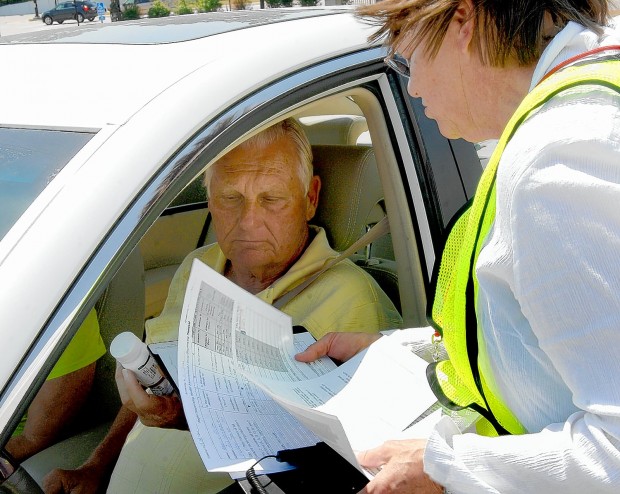 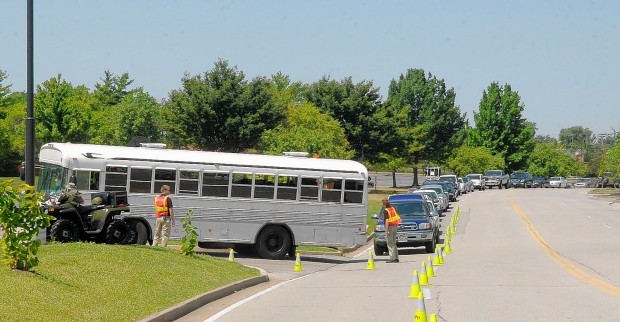 ROY SYKES / JOURNAL Volunteer "victims" of the simulated bioterror attack Thursday arrived at the aid station by any means possible to receive medicine. 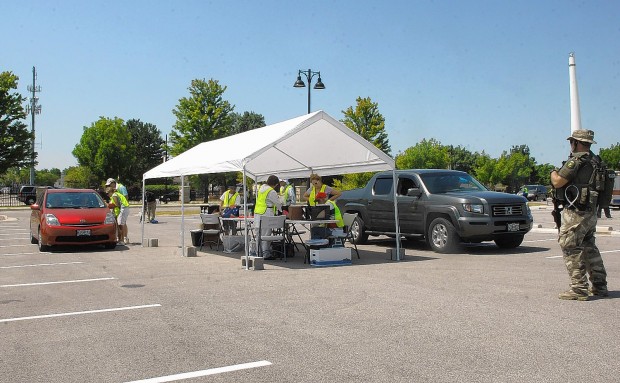 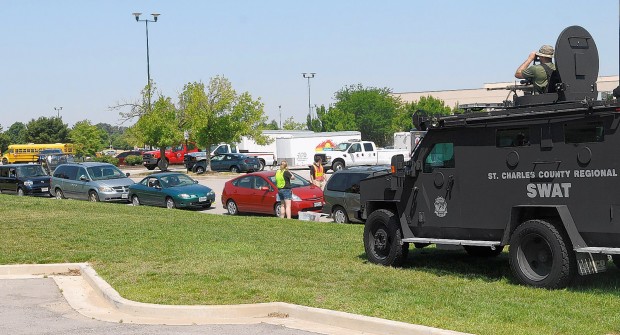 ROY SYKES / JOURNAL Part of the regional bioterror drill was the use of security that would be needed in the face of a true emergency. St. Charles County Regional SWAT trained with health agencies during the event. 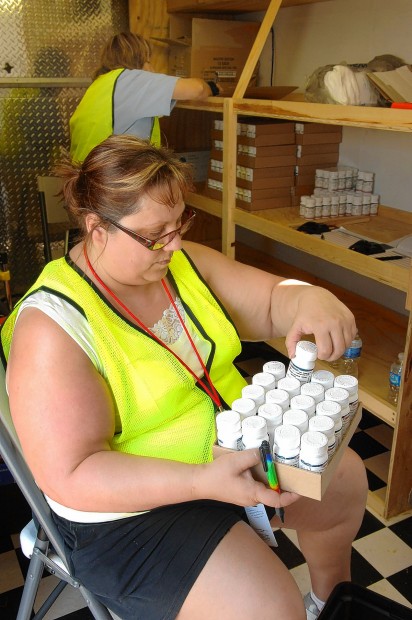 Organizers of a dress rehearsal Thursday on how to get medicine into the hands of people who need it during an emergency had to literally deal with the heat of the moment.

Noonday temperatures hovering at 100 degrees cut short an elaborate bioterrorism response drill on a parking lot near Mid Rivers Mall in St. Peters. Officials ended the drill early after a few of the more than 150 volunteers and agency representatives felt ill effects from the heat, but officials said they learned some things that could help in the event of a real emergency.

The St. Charles County Department of Community Health and Environment coordinated the drill, designed to practice how to distribute medication to area residents within 48 hours of a terrorism incident involving anthrax, an acutely infectious disease. The drill involved 25 or more St. Louis area emergency response agencies, health departments and hospitals.

In an emergency, medication would come from the federal Strategic National Stockpile, said Gill Copley, county health director. The stockpile has large quantities of medicine and medical supplies set aside to protect the public in a health emergency.

The exercise arose out of anthrax incidents around 2001. "There was no strategic national stock pile, there was no funding for states and local governments to plan for a bioterrorist attack," Copley said.

Copley said his department participated in a similar exercise at fixed locations several years ago, but planners are looking at quicker ways to distribute drugs, with a goal of reaching all residents of an area in that 48-hour period.

To speed the process, health departments are exploring setting up drive-through point-of-dispensing, or POD, sites in areas such as the mall where large parking lots could accommodate traffic.

"This is new for the whole metro area. It's been done in other parts of the country but not here," Copley said.

Volunteers were asked to drive through the site off Suemandy Drive where occupants of each vehicle filled out a short medical questionnaire and received special "medication" in bottles. The medicine bottles were empty and returned when vehicles exited.

To draw more traffic, organizers said the first 500 volunteers would receive a Chick-fil-A sandwich for their trouble before they drove off.

Authorities also wanted to evaluate staffing and other support units that are part of the distribution. "If you have plans, you have to try them out, you have to test them," Copley said.

Security was a readily apparent element of the exercise. Members of the Metro Air Support helicopter unit flew the "medical supplies," landing in a clearing adjacent to the site. The St. Charles County SWAT unit, which includes officers from several police departments, provided armed guards to escort the medication from the helicopter.

"All of that is pretty much standard all across the country, that kind of security," Copley said. "We're not allowed to pick up the drugs like we just did without law enforcement armed security."

Security would be vital to control crowds and prevent medication from being stolen, said Capt. David Todd of the St. Charles County Sheriff's Department, who heads the county's Special Operation Unit.

Officials hoped vehicles at the drive-through entrance could get through the line in a few minutes. "Five minutes would be great," Copley said. But drivers found themselves waiting in line for as much as 45 minutes.

Officials took precautions to help workers deal with the heat, providing liquids and access to air-conditioned tents, command vans and fans. SWAT team members, who carried a large amount of equipment, were rotated to cooling stations every 15 minutes.

"We've got a lot of ice water, we've got everybody briefed on what they need to do. And we're watching each other," Copley said. "Everybody who works for us has been told if you start to feel faint, if you start to feel dizzy, you need to get into the cooling tent to cool off. And drink water."

Two ambulances and paramedics stood by just in case.

At least one of the 37 passengers in a St. Louis Job Corps school bus in line for medication had to be helped off. Bus passengers complained the vehicle's air conditioning wasn't working. Emergency responders distributed water bottles, and Larry Guessfeld, of Chick-fil-A restaurants, stepped on board with a container with sandwiches.

Other vehicles remained in line. Bob and Nancy Miller of Weldon Spring were in the first car in line. They heard about the event and stopped by on the way to the Macy's store in the mall. Bob Miller said it was a good exercise. "It's not for us, it's for those being trained," he said.

Angie Mason and her sons Drew, 3, and Will, 8, sat in their minivan waiting for the "medication" and sandwiches. "It's a way to get out of the house," Mason said.

She said the drill was a good thing. "I'm a high school teacher, and we practice drills all the time in schools," said Mason, who teaches at Francis Howell North High School.

Tim Peters and Chris Fruhwirth of O'Fallon read about the drill in a local newspaper. They waited in their car for Guessfeld to hand each of them a sandwich.

"I think it (the drill) informs people," Peters said. "I know during a catastrophe or any other thing like that panic and craziness are going to be all around. This is one way of dealing with it."

Jim Bethman kneels next to a stalk of corn fired from the roots all the way past an ear he's peeling the husk off of.

Area workers have jobs that are cool when it's hot

While many residents bared skin to beat the recent heat, David Van Camp packed on the fabric.

ROY SYKES / JOURNAL Volunteer "victims" of the simulated bioterror attack Thursday arrived at the aid station by any means possible to receive medicine.

ROY SYKES / JOURNAL Part of the regional bioterror drill was the use of security that would be needed in the face of a true emergency. St. Charles County Regional SWAT trained with health agencies during the event.