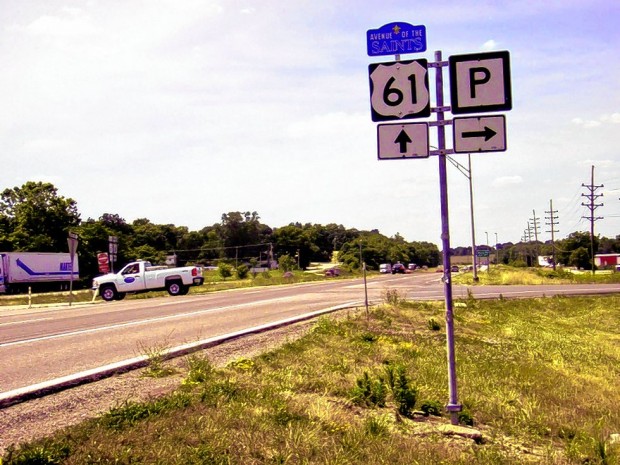 BRIAN FLINCHPAUGH / JOURNAL Missouri Department of Transportation officials say they can work with local communities to make the intersection of highways P and 61 safer, but building a new interchange is unlikely in the near future. 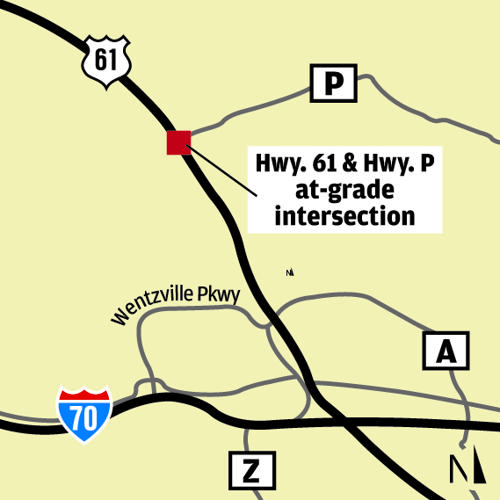 The Missouri Department of Transportation unveiled the details Wednesday for a "travel safe zone" designed to make travel safer on Highway 61 from Wentzville almost to the Lincoln County line.

Establishing a travel safe zone will mean stepped up law enforcement and doubling fines for speeding and other moving violations on a section of highway where local residents and officials say there have been too many fatal accidents.

Details were outlined at a news conference Wednesday morning at the MoDOT commuter lot near the Highway 61-Highway P interchange. In attendance were the mayors of Wentzville and Flint Hill, Wentzville Board of Aldermen members, state Rep. Chuck Gatschenberger (R-Lake Saint Louis), and members of the Missouri Highway Patrol and other local law enforcement and emergency responding agencies.

Tom Evers, MoDOT's St. Charles County engineer, said zones are established along highway sections where the number of fatal or disabling injuries from accidents is higher than statewide averages. Setting up a zone doesn't mean reducing the speed limit. The speed limits along Highway 61 north of Wentzville varies from 60 to 65 miles per hour.

"It's to bring awareness to people entering this area to pay attention, focus on your driving and focus on the at-grade crossings that are up and down this corridor," Evers said.

Evers comments drew applause from the city officials at the conference. Wentzville and nearby Flint Hill residents have been urging safety improvements particularly at the Highway P interchange where there have been fatal accidents.

At a June 27 meeting, residents and city officials told state highway officials that accidents seem inevitable at the Highway P interchange with traffic having to move into a crossover median on the divided Highway 61 to make left turns.

Wentzville Mayor Nick Guccione said a travel safety zone gives law enforcement more tools to protect the public. The Board of Aldermen was also expected to approve an ordinance establishing the travel safe zone along the stretch of Highway 61 in the city at its meeting Wednesday evening.

"My view is not that we want to fine people," Guccione said. "We just want to bring awareness and have you slow down. If you don't slow down, I'd rather see you get fined than hurt somebody."

The zone designation will be in effect for a year. MoDOT will evaluate whether to extend it depending whether accidents are down, Evers said.

Along with the yellow signs on the either side of the highway and median, Evers said changeable message boards will display information to passing drivers, including the number of tickets issued in the zone.

More measures to increase safety at Highway P and other at-grade highway crossings are anticipated.

"Just identifying this as a travel safe zone is definitely not the ultimate fix for this portion of highway," Evers said. "This is step one."

Further steps involve discussions between local and state officials. A state traffic safety engineer is expected offer recommendations and Evers said the state will discussion options with city and local officials at a future open forum.

One option may involve eliminating the crossover medians and changing some lane configurations at the interchanges. Local governments or businesses may be asked if they would be willing to pick up half the cost.

Converting the Highway P exit to an overpass or full interchange is unlikely soon because of a lack of state and federal money right now. To deal with at-grade crossings along Highway 61 in Lincoln County, MoDOT built an $18.6 million overpass on Highway C in 2007 and a $12.7 million overpass between Highway U and Mette Road.

But even though state money is limited, Ed Hassinger, MoDOT's district engineer, told local officials and residents in June that some funding for the travel zone and improvements was available. Establishing a travel safe zone may provide some money to local law enforcement to pay for overtime, he said.

Wentzville residents and officials have been pressing MoDOT about safety issues at Highway P for years. The latest effort began in May when Aldermen Forrest Gossett, Ward 1, urged the city to press MoDOT for improvements.

Guccione lauded Mary Tow, the wife of former Alderman Leon Tow, for collecting more than a thousand signatures earlier urging improvements along Highway 61. "I definitely feel good about it," said Tow, who attended the news conference.

Two other zones are in place in the St. Louis area, including a seven-mile section of Interstate 70 from Cypress Road to the St. Louis city boundary and on several sections of Highway 94 near Defiance in southwestern St. Charles County.

Evers said extending the zone on Highway 94 comes up for discussion in October.

In the zone: double fines for speeding on Hwy. 61 near Wentzville

On Highway 61 from Wentzville to almost the Lincoln County line, you'd better watch out. You'd better not speed.

BRIAN FLINCHPAUGH / JOURNAL Missouri Department of Transportation officials say they can work with local communities to make the intersection of highways P and 61 safer, but building a new interchange is unlikely in the near future.