POKIN AROUND: Got $14.9 million? The mansion on the lake is for sale
0 comments
Share this
{{featured_button_text}}
1 of 2 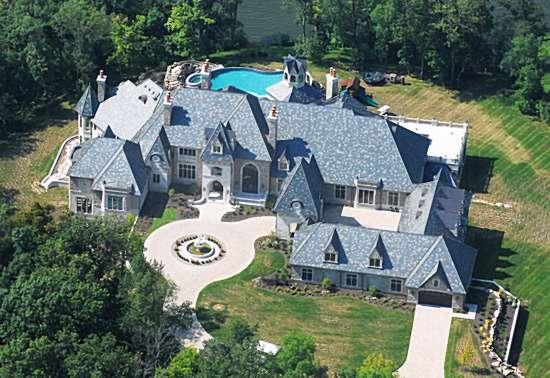 RYAN PREWITT PHOTO - The mansion on Lake Saint Louis is up for sale. (Aerial photo taken with the assistance of pilot Herman Rae, president of SkyLink Aviation, based at St. Charles County Airport at Smartt Field.) 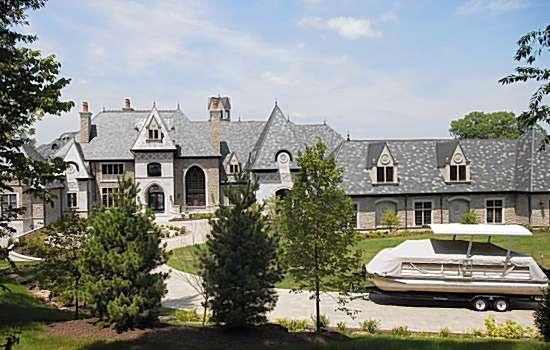 Has that two-car garage become too confining? Are you envious of your neighbor's pool? Wouldn't you rather stay home when you bowl?

Maybe it's time to think bigger and grander. The mansion on the lake is for sale! Got $14.9 million?

I'm talking about 5 Lakeview Court in Lake Saint Louis, the palatial estate of Darain Atkinson, founder of U.S. Fidelis, which is in bankruptcy.

Atkinson's house sits on 6.7 acres on the east end of Lake Saint Louis. Construction started in 2007. Atkinson and his family moved in around Christmas, according to neighbors.

It has nine bedrooms, 12 full bathrooms and four half-baths.

It has 12 fireplaces, an indoor pool, an outdoor pool and two hot tubs.

It has an art studio, a music room and a movie theater.

There's a bowling alley, a billiards room and an exercise room.

It has an 8,000-square-foot outdoor entertaining area.

It has an observation tower accessible by a spiral staircase.

If you want a peek inside go to www.dielmannsothebysrealty.com. Look for the listings of agents. Scroll down and select Gillian Noero. Then click "view agent listings."

Once there, you can't miss the $14.9 million price tag. (Euro and pound equivalents are conveniently provided.)

Noero didn't call me back. I wanted to ask if I could pull a photo or two off the website for this story. She apparently has no idea how many of you Journal readers are high rollers. And because she didn't call me back I'm going to mention something I might have otherwise overlooked. The place doesn't have a single horseshoe pit.

I called Atkinson and asked for a tour of the mansion, if he still owned it.

Yes, he said, he still owns it.

But no dice on the tour.

I pleaded my case. There's a lot of public interest in the house, I said.

"I can understand that and I appreciate it," he said. "But I'm high profile. I will have to decline."

But he did tell me the rumor is false that Matt Holliday was buying the house.

"He has not even seen the house. He did not buy it."

Atkinson declined further comment and gave me the name of his attorney.

Atkinson owns the home, still lives there and is trying to sell it to settle creditors' lawsuits, said Norman W. Pressman, a St. Louis attorney.

"Darain is trying to resolve his situation with all of the parties that are going after him, even though he does not believe there has been any wrongdoing," Pressman said.

He said Atkinson is working with a creditors committee as well as his former company, U.S. Fidelis, an auto warranty company in bankruptcy.

The company is not taking new customers and is managed by a court-approved chief restructuring officer, Pressman says.

Critics say Atkinson and his brother Cory siphoned money from the company to bankroll lavish lifestyles.

The Missouri attorney general, as well as attorneys general from several other states, have sued the company for allegedly misleading customers.

Pressman said the goal is to resolve the bankruptcy proceedings in a manner that also satisfies the attorneys general lawsuits.

Elder and his wife have lived in their home 18 years. They say they had little peace on the home front while Atkinson built his mansion. In addition, they say, Atkinson cut down trees and brush on their side of the property line.

The Elders were hosting a May 30 barbecue when an adult guest ventured out the backyard onto Atkinson's property for his own unauthorized self-guided tour. Atkinson yelled at him and called police, Elder says. Three Lake Saint Louis squad cars showed up. No one was arrested.

"He got a taste of what I put up with for four years," Elder says.

Elder talked to Atkinson the next day about the incident.

"He told me he fears for his life," Elder says.

By the way, Elder asks, how come Atkinson gets perks others don't?

The letter carrier and trash collector go down Atkinson's driveway, past the iron gate (which is left open for them) to the house.

"I don't have nobody coming up my driveway," says Mary Ann Elder. "Why does he?"

Good question. The trash company did not return my call. Valerie Hughes, a spokeswoman for the U.S. Postal Service, told me Friday afternoon the people who might know about the situation were on vacation but she would follow up.

Steve Pokin is a columnist for the Suburban Journals. He can be reached at spokin@yourjournal.com or by phone at 636-946-6111, ext. 239. An audio version of the column is on the Journal website, under videos, at suburbanjournals.stltoday.com/stcharles.

RYAN PREWITT PHOTO - The mansion on Lake Saint Louis is up for sale. (Aerial photo taken with the assistance of pilot Herman Rae, president of SkyLink Aviation, based at St. Charles County Airport at Smartt Field.)