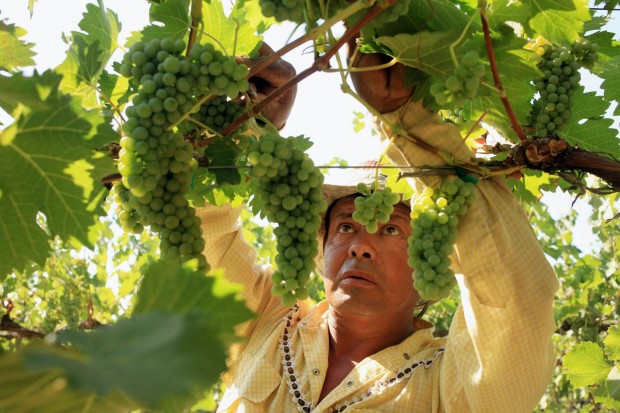 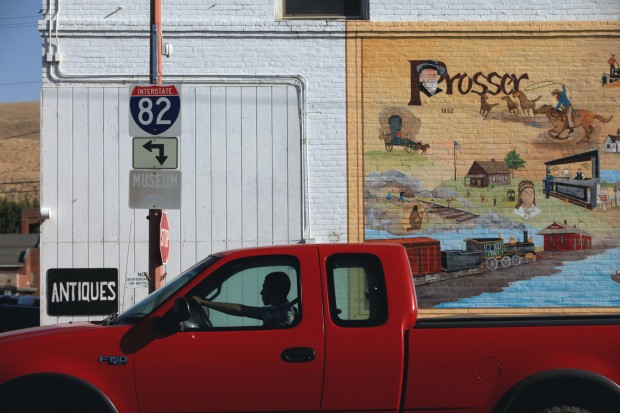 The small town of Prosser, Washington, in the Lower Yakima Valley is home to many wineries. (Erika Schultz/Seattle Times/MCT) 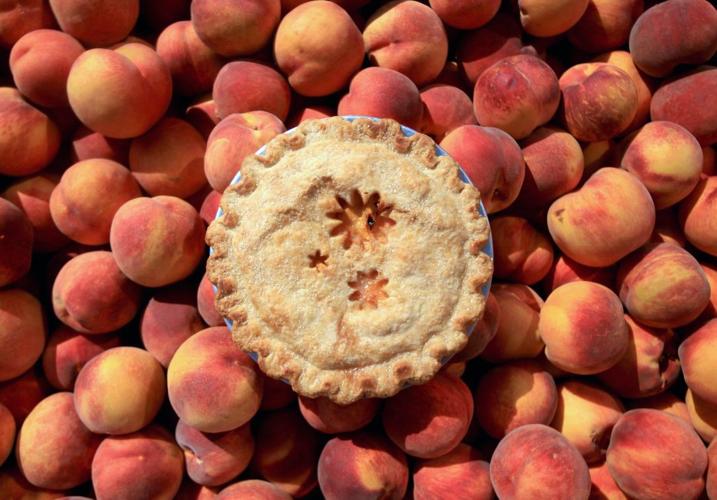 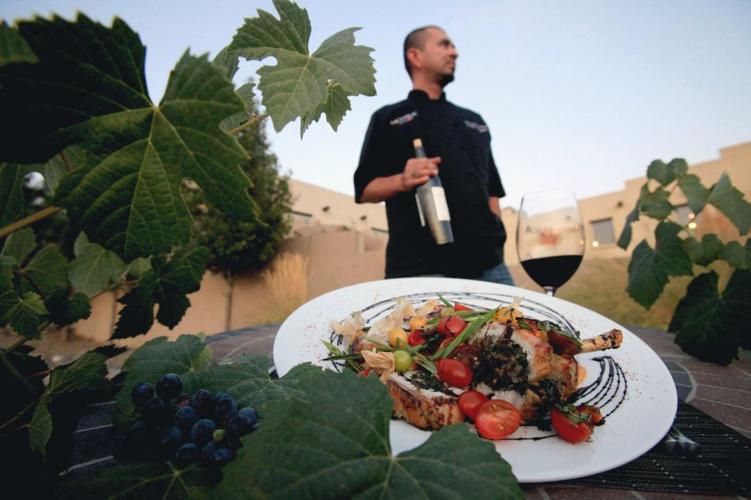 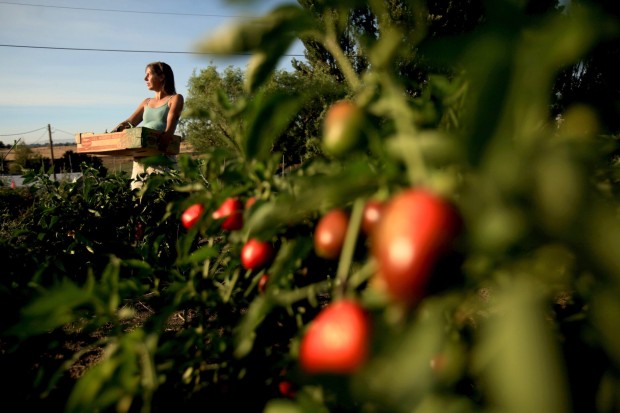 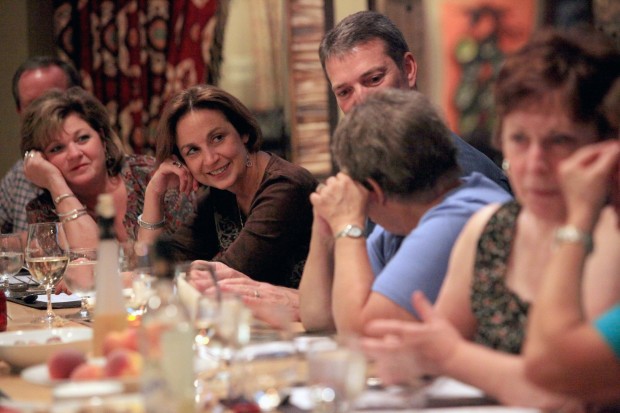 PROSSER, Wash. • An adventurous crowd of foodies surrounded me at the Desert Wind winery's long dining table. As we started in on the fried green tomatoes, we noticed a garnish nobody recognized: what looked like little yellow cherries topped by tiny corn-husk winglets. The little wings were swept back as if part of our salad course was ready to join the kestrels soaring over the nearby Horse Heaven Hills.

Was that husk edible or not? Should we ask?

"I already ate mine," confided Sheila, a Seattleite sitting next to me.

OK, I confess, I had, too, washing it down with the suggested wine, a crisp Wahluke Slope sauvignon blanc. The husk was, uh, crunchy.

"These are what we call ground cherries," announced our host, Chef Frank Magana. "They grow on a bush like a tomatillo. I peeled back the husks to look like bird wings. The husk won't hurt you if you eat it, but normally we don't."

This was Desert Wind's monthly, anyone-is-welcome Supper Club, and it served to spotlight a big trend in wine-country tourism: helping visitors enjoy wine together with local food.

The Yakima River's fertile valley and surrounding sun-toasted hills, the birthplace of Washington's wine industry — still producing nearly half the state's wine — is the perfect venue for uniting local wines with the abundance of fresh vegetables, tree fruits, meats and cheeses that come from just up the road.

It's tourism with an emphasis on the "mmmm."

Yakima Valley winemakers capitalized on the trend this summer, publishing a deck of recipe cards on which 34 wineries matched one of their wines with a favorite recipe, often from the family running the winery. For example, Fries Family Apple Cake is paired with the family's Desert Wind riesling.

Wineries took turns in July and August offering tastes of their featured dish and wine to tasting-room guests. It's the kind of thing you can expect more of here.

"For us it was a good choice, because while there are lots of great winemaking areas in the state, the valley has so much bounty (of food) as well," said Barbara Glover, director of Wine Yakima Valley, an association of winemakers and grape growers. "Our fruit-forward wines have flavors that pair really well with food."

Promoting the wares of farming neighbors came easily for winery folks such as Tara Divers, tasting-room manager at Milbrandt.

"We have a friend who brings us these beautiful Asian eggplants," Divers said. "A lot of people don't even know we grow eggplant in the Yakima Valley."

For some of that eggplant, head for Prosser's Saturday farmers market, where you'll also find sweet peaches that spritz your chin with juice and peppers in colors you never knew peppers came in (like purple).

And you can meet Buggirl.

Insects of all kinds fascinated Stacey Gingras as a child, thus the name of her business, Buggirl's Garden. The Prosser native is a regular vendor at the market, and also delivers produce to local wineries and restaurants.

Besides Milbrandt's eggplant, she provided the green tomatoes and ground cherries for our Desert Wind dinner.

"It's just a lot of fun," Gingras said. "I've been working with Frank (Magana) for about three years. If he has a special event and has a recipe in mind, he'll call and ask if I have something. Green tomatoes? I've got green, red, whatever you want."

And the ideas flow both ways.

"I'll call up (a chef) and ask, 'How about some radish silique for the salad tonight?' It's a funny-looking bulbous seed pod that's crispy but has a cool taste also."

Winemaker's dinners, with those adventurous diners, are perfect for the occasional novelty produce that Gingras likes to mix with the standards such as green beans or squash.

"The audience I have, I can introduce something like that and I know they'll love it," Magana said. "We talk with Stacey once a week, and we even go out to her farm. We want to know our farmers as much as we know our winemakers."

Those efforts are bringing repeat customers, such as Joe and Shari Neuenschwander, of Issaquah, who came to the Desert Wind Supper Club last month for their third time since summer 2010.

"We like to drink red wines, and that's what we usually have at home. But this opens you up to thinking about different things."

Why spend getaway weekends pursuing the perfect food-and-wine pairing? Devotees will tell you there's a sweet spot that's worth the quest.

"For example, if you get a good pinot and have just the right glaze on duck, everything tastes better," Neuenschwander said.

Plus, when you're out driving around the Yakima Valley with the windows down, you'll revel in some pretty sweet views of Mount Adams and Mount Rainier from country roads lined by vineyards, orchards and hop vines.

Only one whispered complaint around the Supper Club table among diners from the wet side of the mountains: Green tomatoes? We have more than enough of those on our own side of the state this year, thanks.

Then again, now we know what to do with them.

And what wine to serve.

The best foods to help you sleep

Avoid these two common car features to save money on fuel

Avoid these two common car features to save money on fuel

The small town of Prosser, Washington, in the Lower Yakima Valley is home to many wineries. (Erika Schultz/Seattle Times/MCT)