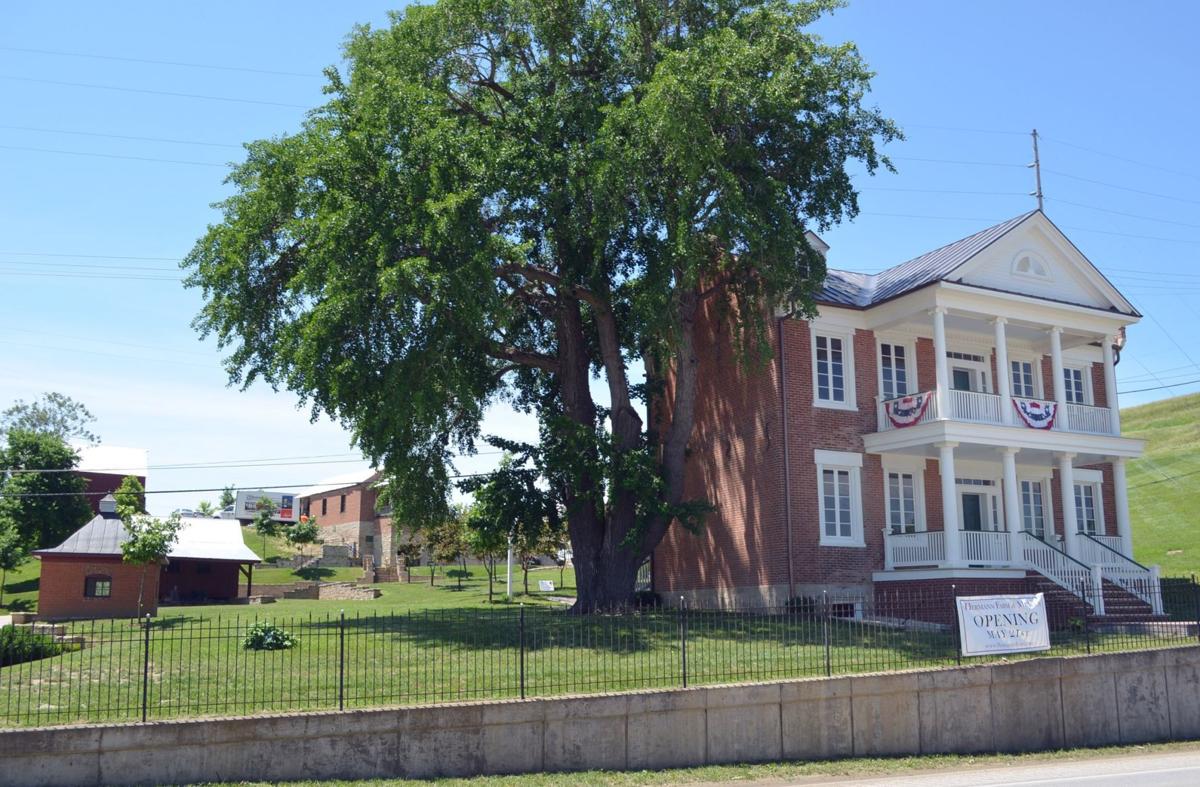 The Hermann Farm and Museum is on 200 acres in the hills just east of Hermann. Photo by Tom Uhlenbrock 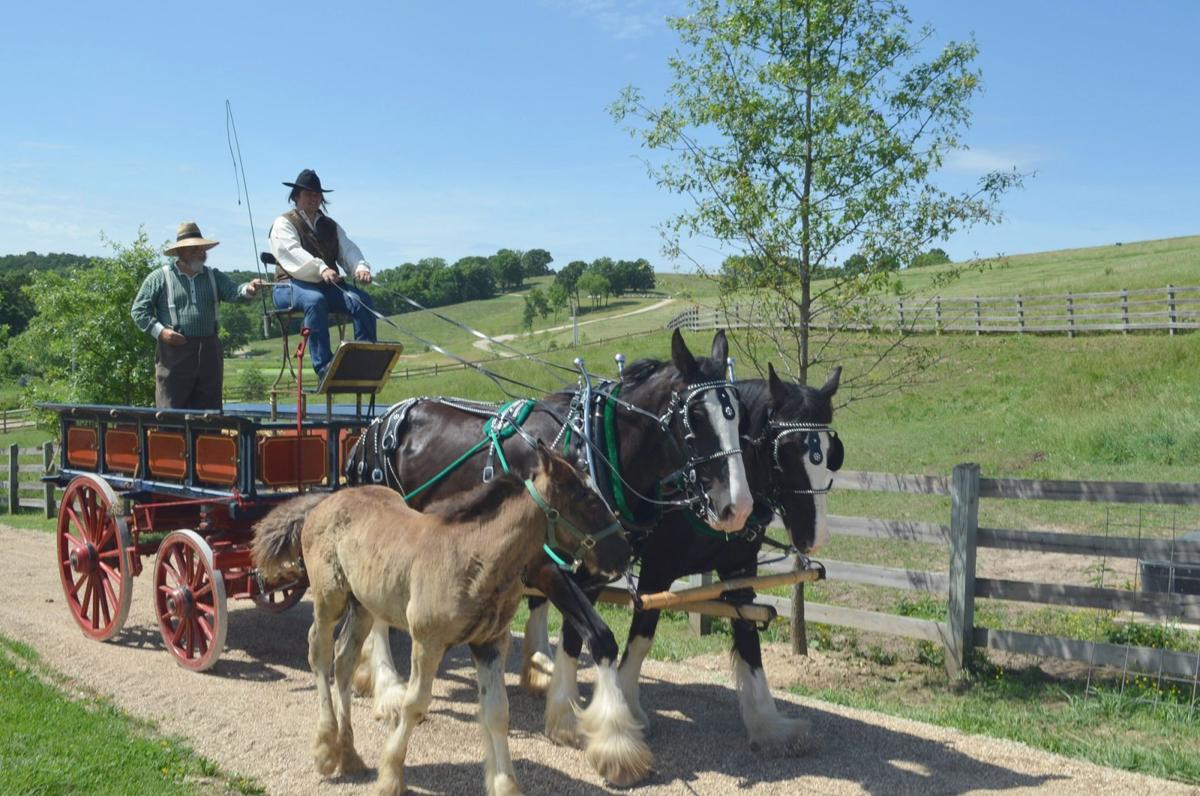 While a foal tags along with its mother, Darryl Coates and Ashlee Hughes lead a team of Shire draft horses over a farm road. photo by Tom Uhlenbrock 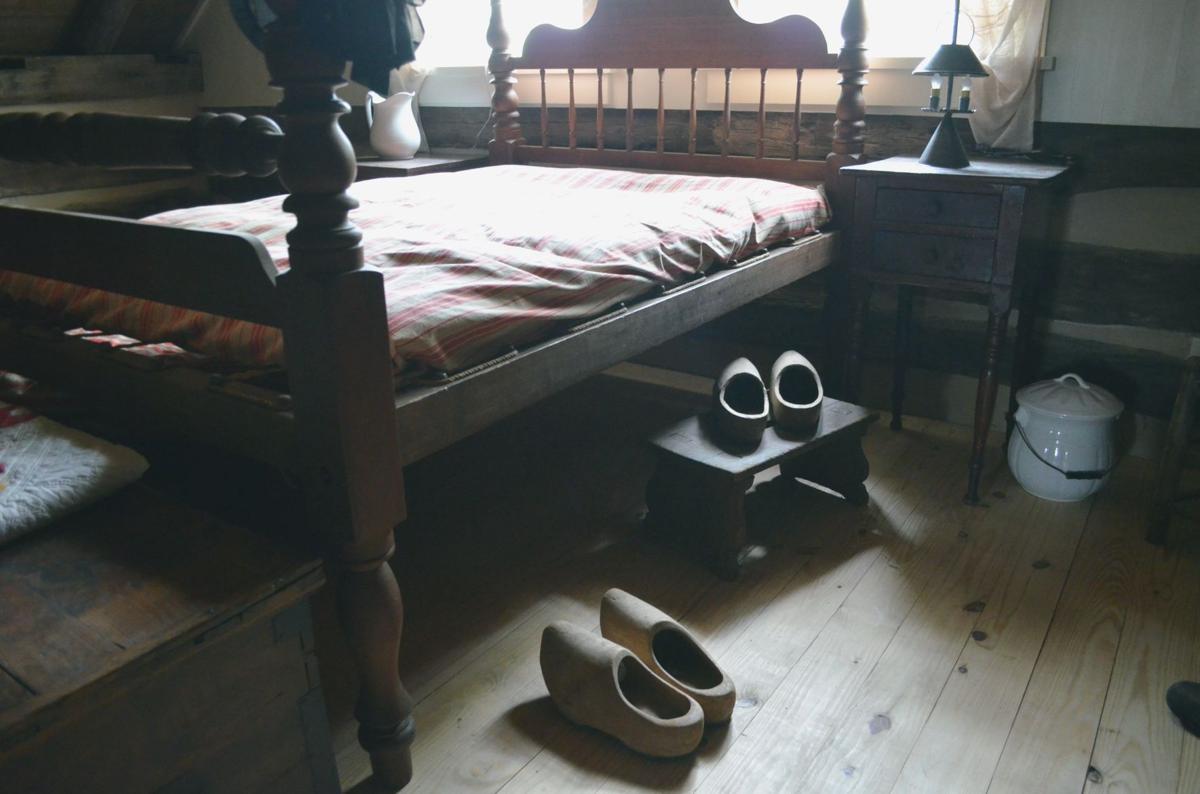 The Hermann Farm and Museum is on 200 acres in the hills just east of Hermann. Wooden shoes sit near a bed in the master distiller's house. photo by Tom Uhlenbrock 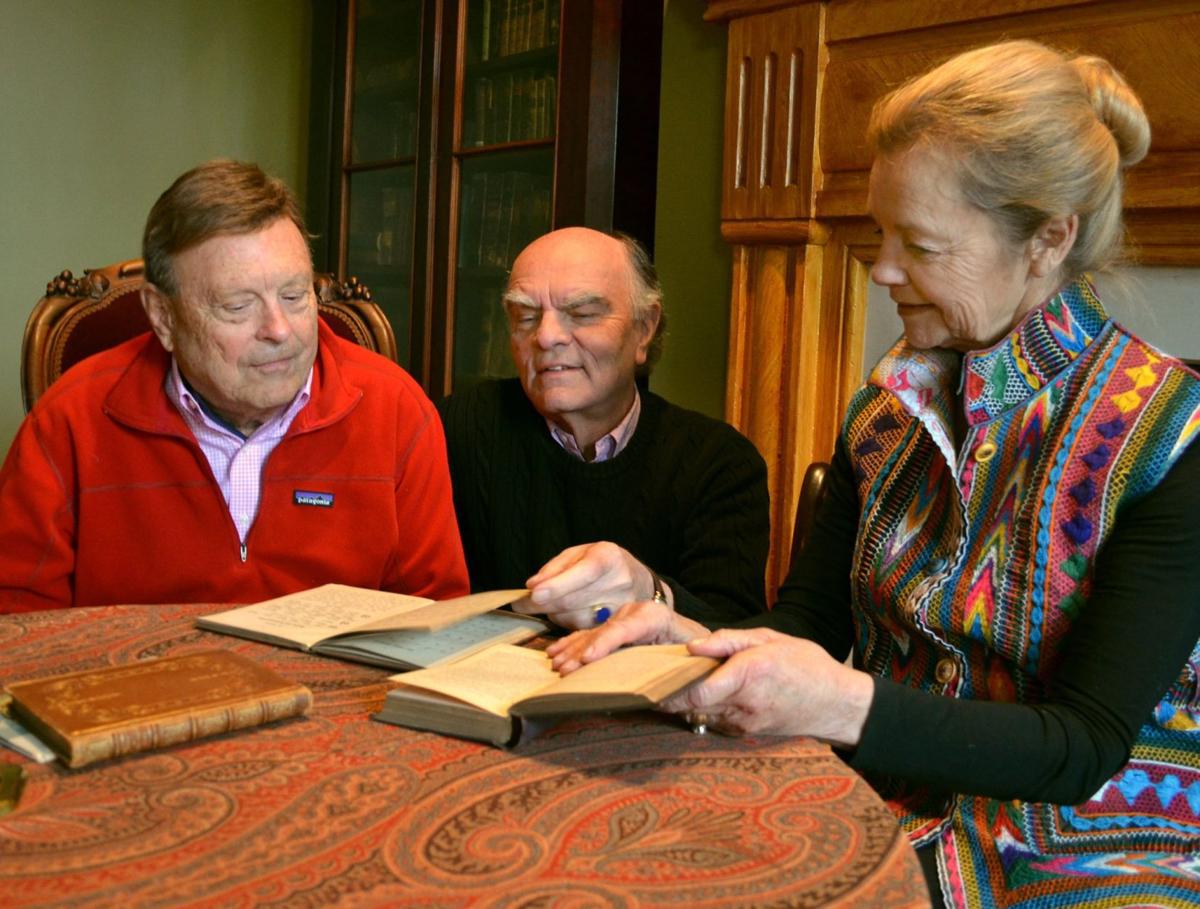 Jim and Mary Dierberg inspect a rare book with Richard Baumann, center, a university professor who helped with the historic renovation of the Husmann House. photo by Tom Uhlenbrock

Hermann, Mo. • The stage is set. The stars have arrived.

Jim and Mary Dierberg’s Hermann Farm and Museum opened in May, offering visitors a trip back in time to see how the first German immigrants lived and farmed after arriving in 1837 in the hilly valley that would become Hermann.

The Dierbergs have restored historic buildings on the 200-acre farm, including the two-story Husmann House, a Greek-revival style home that has served as the estate and business office of prominent leaders in Hermann since 1850. The house now serves as a museum with authentic period furnishings.

The collection of meticulously restored, and in some cases relocated and re-assembled, buildings on the grounds creates a pastoral setting in the hills east of Hermann overlooking the Missouri River.

“The hills around here really reminded me of Bavaria,” Jim Dierberg said. “We thought, ‘What a great place for a living history farm.’”

Tram tours take visitors through the farm, which has chickens, sheep, cattle and a pair of white mules named Pat and Jane. The biggest addition to the livestock arrived in late May — eight Shire draft horses, a massive and mild-mannered breed that is sure to be the showstopper on the 2.2-mile tour.

The black-and-white beauties include five mares and their three foals. “The five mothers are with foals for next year — it adds up in a hurry,” said Mary Dierberg.

Jim Dierberg said the Shires are the biggest of the draft horses — larger than Clydesdales — but their population in the United States has dropped to critical numbers.

“They’re endangered,” he added. “Eventually, I hope to have the National Shire School here, training shires. It will be in three or four buildings. We’ll have a show with the Shires at 11:30 on Saturdays, and may sponsor a plowing contest.”

Although the “living history farms” they visited in Germany did not have livestock, Jim Dierberg noted that one of the previous owners of the Husmann House traded draft horses and mules for a living.

“We’re just carrying on what they did, continuing in their mission,” he said.

“I think 90 percent of the visitors will come for the animals, maybe 10 percent for the history. Everybody loves animals.”

The Dierbergs first came to Hermann during a Maifest in 1971, and fell in love with the town. Dierberg was chairman of First Banks Inc. and bought the bank in Hermann the next week.

“I told Mary we needed a reason to come back,” he said. “There was one building in town that was German and was going to be torn down. I bought it and fixed it up. It’s like fishing. You catch one fish and you’re hooked.”

The Dierbergs are from St. Louis and have homes in Hermann and the Santa Barbara, Calif., area, where they have a winery and three vineyards. Jim Dierberg founded First Banks; his brother, Robert, has the grocery chain in St. Louis.

In 1974, the Dierbergs bought a winery in Hermann with cellars that had been built in 1848 but were filled in during Prohibition. They excavated the cellars and opened Hermannhof Winery.

Over the next four decades, the Dierbergs continued buying and restoring historic buildings, converting them into upscale lodging and restaurants, and added an open-air courtyard with two brick pavilions for music and art festivals. An old car dealership became the Festhalle, which hosts special events.

The couple is largely responsible for the renaissance of Hermann as a year-round tourist destination showcasing its German heritage. They set up the Dierberg Educational Foundation, a nonprofit, charitable organization to preserve and present the region’s cultural history.

“The Germans who first came here back in 1837 wanted to keep their traditions, they thought they were being Americanized,” Jim Dierberg said. “I’m following in that tradition.”

On the tram tour

After visiting the Husmann House, its barn and outbuildings, visitors can begin their riding tour on a 50-passenger tram at the brick archway and log barn on Highway 100. An 1838 house next door has been reborn as a visitor center and mercantile with gift items.

Another nearby remodeled house contains an exhibit on George Husmann, who is known as the father of the Missouri wine industry. “Missouri was the No. 1 wine producer,” Dierberg said. “Then Husmann moved to California, and it became No. 1, and Missouri No. 2. So be it.”

An adjacent brick building has been turned into the “Schuetzenhalle,” which would have been used by the Hermann Sharpshooters Society. The one-room building displays vintage rifles and targets.

“In winter, in the good old days, they’d actually shoot these targets in the tavern,” Dierberg said.

A German “four-square garden” is between the buildings. “We’re trying to show off the food of the Missouri River Valley,” he said.

The oldest of all the buildings on the farm is a log trading post that has been restored. The year 1771 is scrawled on one of its beams, but Dierberg said it may date to 1744, long before Lewis and Clark arrived.

“When the first contingent of Germans got here in 1837, this is where they stayed,” he said.

Do a little sipping

The tram then takes visitors up the hills, through the pastures filled with cattle and Shires, back to the master distiller’s homestead nestled in a hollow cut by a spring-fed creek.

“I love this setting,” Dierberg said. “This was a simple guy, he didn’t have a lot of money. He showed that you didn’t have to be rich to have a nice place.”

The original house burned, but Dierberg located another log home in the tiny town of Swiss down Highway 19. The logs were numbered, disassembled and brought to the farm, where they were resurrected on a stone foundation.

The original barn still stands, as does a spring house, but only the stone foundation was left of the brick distillery. Dierberg had the distillery rebuilt with a truss ceiling of curving beams, resembling a chapel.

“We’ll be making whiskey, brandy and gin,” Dierberg said. “You can see how spirits are made, taste them and, if you want, buy them. This will be a nice place to do a little sipping.”

Fugitive Beach in Rolla: A stunning stop along I-44 in Missouri

We followed Interstate 44 to Springfield on a pocketbook-friendly trip filled with playgrounds, nature, a castle,  a couple of caves and a sea-blue quarry near Rolla.

All the buildings on the farm, and at other Dierberg projects in town, are furnished with his collection of furniture made by the German cabinetmakers who immigrated to Hermann.

The wardrobes, cupboards, sideboards, chests and other interior items are made from black walnut in a simple, but elegant, style. The early Germans were making the same style furniture while in Pennsylvania but often added painted designs.

“When you look at the style, this was made in the 1850s, but they remembered the 1750s, and what they saw at grandma’s house,” Dierberg said. “It’s not fancy; these were simple people.

“That’s part of our mission, to talk about the furniture and the people who made it.”

Jim Dierberg had said that finishing the Hermann Farm and Museum would be the final chapter in his efforts to preserve Hermann as the heart of Missouri’s German America.

“Mary says it is,” he said with a smile. “But we do have another house we’re working on. Actually, we have two.”

Admission: $18 for adults, $9 for children 3 to 15. School field trips and bus tours are welcomed.

Lake of the Ozarks

Is your house an asset or a liability?

Is your house an asset or a liability?

The cave, the state’s second largest, was closed in 2010 to combat the spread of white nose syndrome

Our Features staffers share some of their favorite getaways within a 6(ish)-hour drive of St. Louis, in hopes of inspiring some of your own travels.

Now that people are getting vaccinated and starting to travel again, let's see those photos. Where are you going? Tell us about your trip.

Bring it on home: Washington, D.C.

The Fountains of Bellagio still erupt with choreographed blasts of water. The Taco Bell Cantina still serves one of the best meal deals (and wedding venues) on the Strip. Most…

Springfield, Illinois: Much to appreciate in the land of Lincoln

Travels with Amy: Even if you only go for the Abraham Lincoln Presidential Library and Museum, it is worth the trip.

The town of Lucas, Kansas, offers even more quirky experiences than just using a restroom inside a toilet.

Bring it on home: Peru

The Hermann Farm and Museum is on 200 acres in the hills just east of Hermann. Photo by Tom Uhlenbrock

While a foal tags along with its mother, Darryl Coates and Ashlee Hughes lead a team of Shire draft horses over a farm road. photo by Tom Uhlenbrock

The Hermann Farm and Museum is on 200 acres in the hills just east of Hermann. Wooden shoes sit near a bed in the master distiller's house. photo by Tom Uhlenbrock

Jim and Mary Dierberg inspect a rare book with Richard Baumann, center, a university professor who helped with the historic renovation of the Husmann House. photo by Tom Uhlenbrock