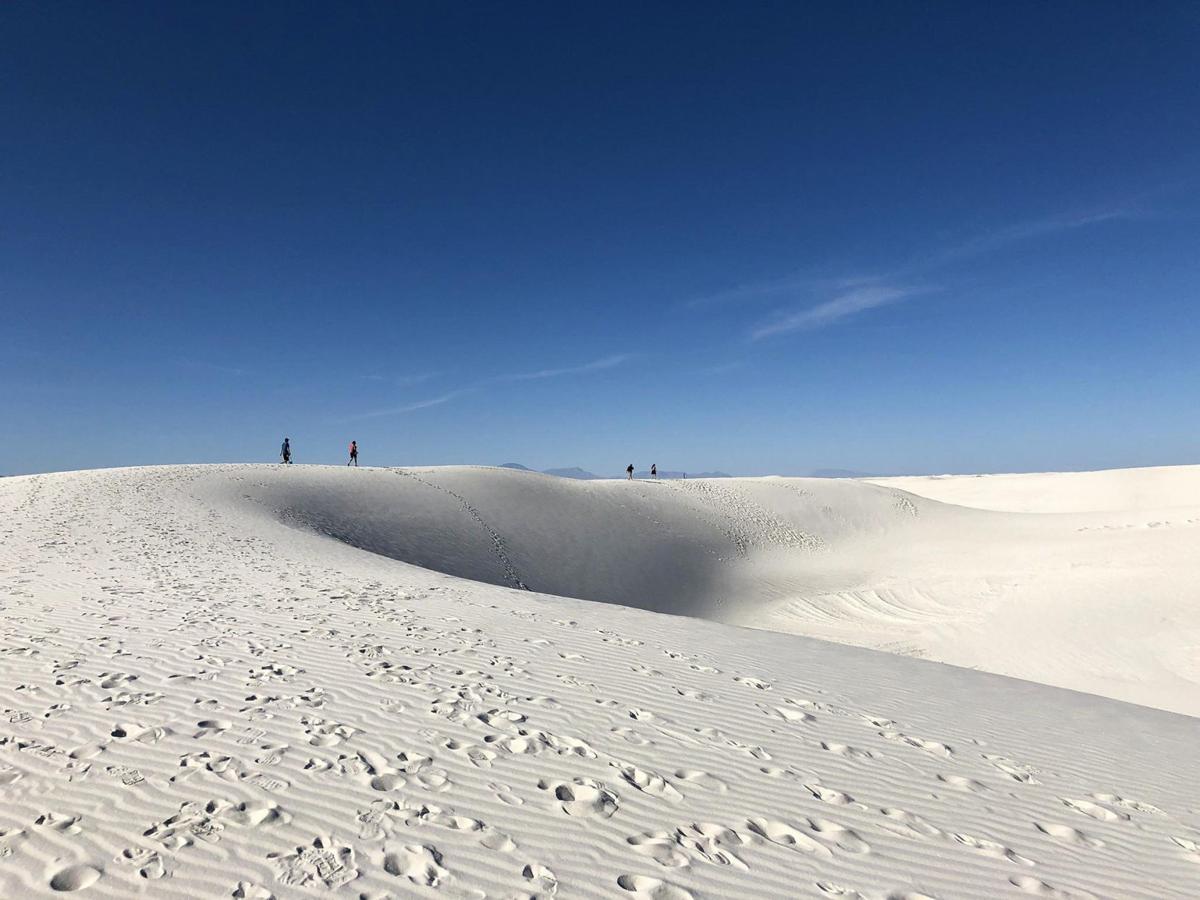 The Alkali Flat Trail is the longest and most strenuous at White Sands, the country's newest national park. Hikers must follow the blazes, as there is no exact trail. 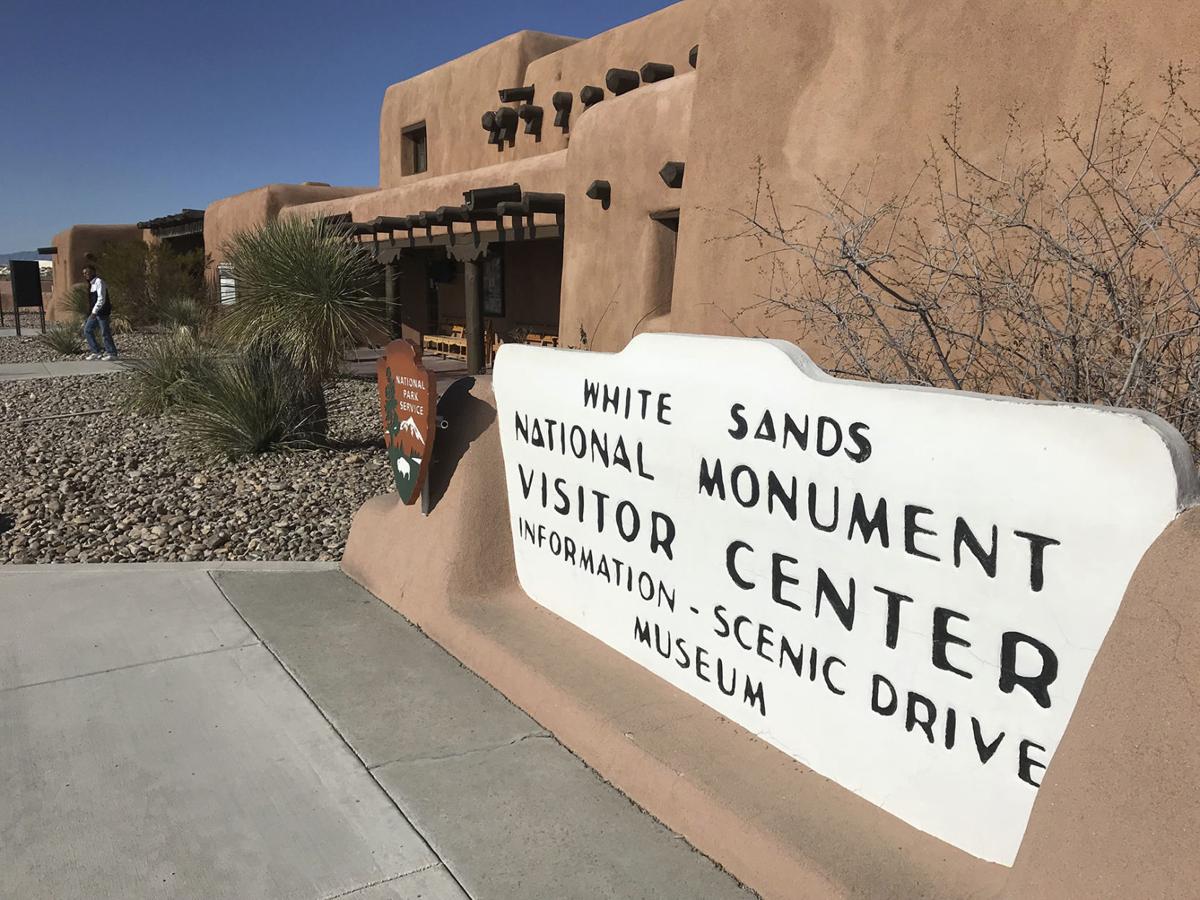 The historic building that greets visitors at White Sands National Monument near Alamogordo, N.M. The monument was recently elevated to national park status.

I didn’t expect to be hugged today, let alone three times. And by strangers. But that’s what happened after I snagged one of the 10 coveted campsites at White Sands National Monument last October, then offered to share it with some people who just missed the cut.

None of us knew that, weeks later, White Sands would become the country’s newest national park. Defense legislation signed Dec. 20 by President Donald Trump included a provision to turn this national monument into the 62nd national park, putting it among the likes of the Grand Canyon, Yosemite and Yellowstone.

But on this fall day in southern New Mexico, national park designations weren’t on any of our minds. What was: procuring a campsite. The simple gesture of sharing landed me three new besties: Meghan, a local seed collector preparing for graduate school, and Jules and Owen, artists from Austin, Texas. After their round of hugs, bracketed by heartfelt thanks, I jokingly note there is a catch to the deal. The trio must promise to rescue me if a tarantula comes creeping near my tent.

While I’m an experienced backcountry hiker, I was dismayed to learn tarantulas are abundant at White Sands. The large, furry spiders can’t kill you, but they’re ugly, their bite can be painful, and I know I’ll freak out if I spot one near my tent.

The three readily agree to form a tarantula brigade, and we part ways with a cheery, “See you tonight!”

White Sands is home to a 176,000-acre gypsum dune field, the world’s largest. More than 600,000 visitors stop in annually to admire its shifting, sparkling-white dunes, which can travel as much as 38 feet a year and are visible from space. In 2019, New Mexico’s congressional delegation renewed a push to make it a national park, a prestigious designation reserved for areas with outstanding scenic features or natural phenomena, coupled with inspirational, educational and recreational value.

White Sands fits the bill. Its gypsum dunes are breathtaking — and they’re a bit of an anomaly, since gypsum is a soft mineral that dissolves easily in water. It’s typically washed out to sea via rivers and other waterways, not left alone to be transformed into sand.

But White Sands is part of the Tularosa Basin, which has no outlet. Monument materials liken it to a tub without a drain. So over time, when gypsum-laden water washed down the surrounding mountains into the basin, the gypsum stayed put. Repeated freezing-and-thawing cycles, coupled with fierce winds, transformed the gypsum crystals into tiny grains of sand, which created the impressive dunes we see today.

The dunes’ existence was threatened around 1885, when profiteers wanted to mine them. That’s because gypsum is a versatile, valuable mineral used in everything from drywall to food and medicine. In fact, one monument sign claims people consume 28 pounds of gypsum in a lifetime. Thankfully, the mining proposal was thwarted by preservationists, and the area was designated a national monument in 1933.

I’d arrived at White Sands the previous evening for its full moon hike, an uber-popular event that takes place monthly from May through October. As the plump moon’s bright light reflected off the snowy dunes, creating shadows despite the darkness, park ranger Brenna Rodriguez regaled our group with tales of life in the dazzling dunes, from the Apache pocket mice whose fur grew lighter over time — camouflage courtesy of natural selection — to the sand verbena and soaptree yucca that grew fast (verbena) and tall (yucca) to avoid being buried alive by the shifting sands.

When our trek was finished, I told Rodriguez I’d be camping at the monument the following night. But she nixed my plan to arrive at 9 a.m., when the office opened. “This morning, all of the campsites were taken in four minutes,” she said, advising me to arrive instead at 7 a.m., when the park entrance gate was unlocked. Thanks to her advice, I was eighth in line, got a campsite and made three new friends. Now here I am, with the entire day to explore.

My first decision: hike or sled? Sledding is one of the most popular activities at White Sands. The gift shop conveniently sells plastic saucers, the most efficient means of rocketing down a sandy slope. While sledding is tempting, I opt to hike instead. The monument contains 8.9 miles of trail via five paths. Each showcases different aspects of the dune field and can be accessed from Dunes Drive, a winding, eight-mile road that ends in a loop.

I spend the day meandering along the various trails, enjoying otherworldly vistas of expansive, snow-white mounds. Occasionally, groups of sliders appear, their colorful saucers decorating the dunes like bits of confetti.

It’s afternoon when I begin my final hike along the five-mile Alkali Flat Trail, the longest and most strenuous. This path skirts a portion of the adjacent White Sands Missile Range, where the first atomic bomb was tested in 1945. There’s no actual pathway here, as the shifting sands easily erase footsteps and change the look of the terrain, sometimes day-to-day. Instead, you have to hike from one orange signpost to the next, blazing your own trail. As I wind up and down the rare, milky dunes, framed by the stately San Andreas and Sacramento mountain ranges, I feel as though I’m on another planet.

With the sun sinking, I head for the backcountry campsites. Each site sits at the bottom of a small depression in between the dunes. My new friends arrive as I’m preparing dinner, which they eschew in favor of climbing atop the dunes to catch the sunset. I toss down my spork and scramble after them.

Minutes later, the show begins. “Wow! That’s incredible!” says Owen, as ribbons of pink, tangerine and butter unroll across the horizon, their light painting the dunes the palest of pinks. In the west, the sun is setting in a blaze of fiery reds and oranges. “The sky looks enormous,” whispers Jules.

As the sun continues its decline and the moon powers up, the dunes take on a delicate lavender hue that deepens to a rich plum. I turn off my camera, knowing I’ll never be able to capture the grandeur unfolding before my eyes.

At sunrise, we again gather atop the dunes, now bathed in a striking baby blue. Awestruck, no one says a word. Eventually, I head down to break camp. And it’s here, alone at my tent, that I see it: a fat, fuzzy spider.

“Tarantula!” I scream, hopping around half-panicked, yet half-amused that I have to call the tarantula brigade into action. Jules, Owen and Meghan race down the dune while I point to the beast from a safe distance. Jules ponders poking at it with a trekking pole, but I say no, fearing that will send it racing toward me.

We look at one another for a moment before Jules says, “This is curious. The tarantula isn’t moving.” Bending down, she scoops it up, then thrusts it toward me with a grin.

Later, I tuck the tarantula into my backpack. I’ll keep it as a reminder that the world is filled with all kinds of beauty, from shining white sands and magnificent sunsets to hugs from strangers and belly laughs with new friends.

Bring it on home: Nepal

Who and where • Preston Bilheimer of St. Louis went to Nepal for a mountain biking expedition. Here, he’s descending from Pikey Peak, Sagarmat…

Follow the footsteps of 'Little Women' on a pilgrimage in Massachusetts

A rural New England cemetery is not where you'd expect to spot four-time Oscar nominee Saoirse Ronan and other Hollywood A-listers on a crisp autumn day.

Hotel design trends: Lobbies and rooms with a point of view

The Alkali Flat Trail is the longest and most strenuous at White Sands, the country's newest national park. Hikers must follow the blazes, as there is no exact trail. 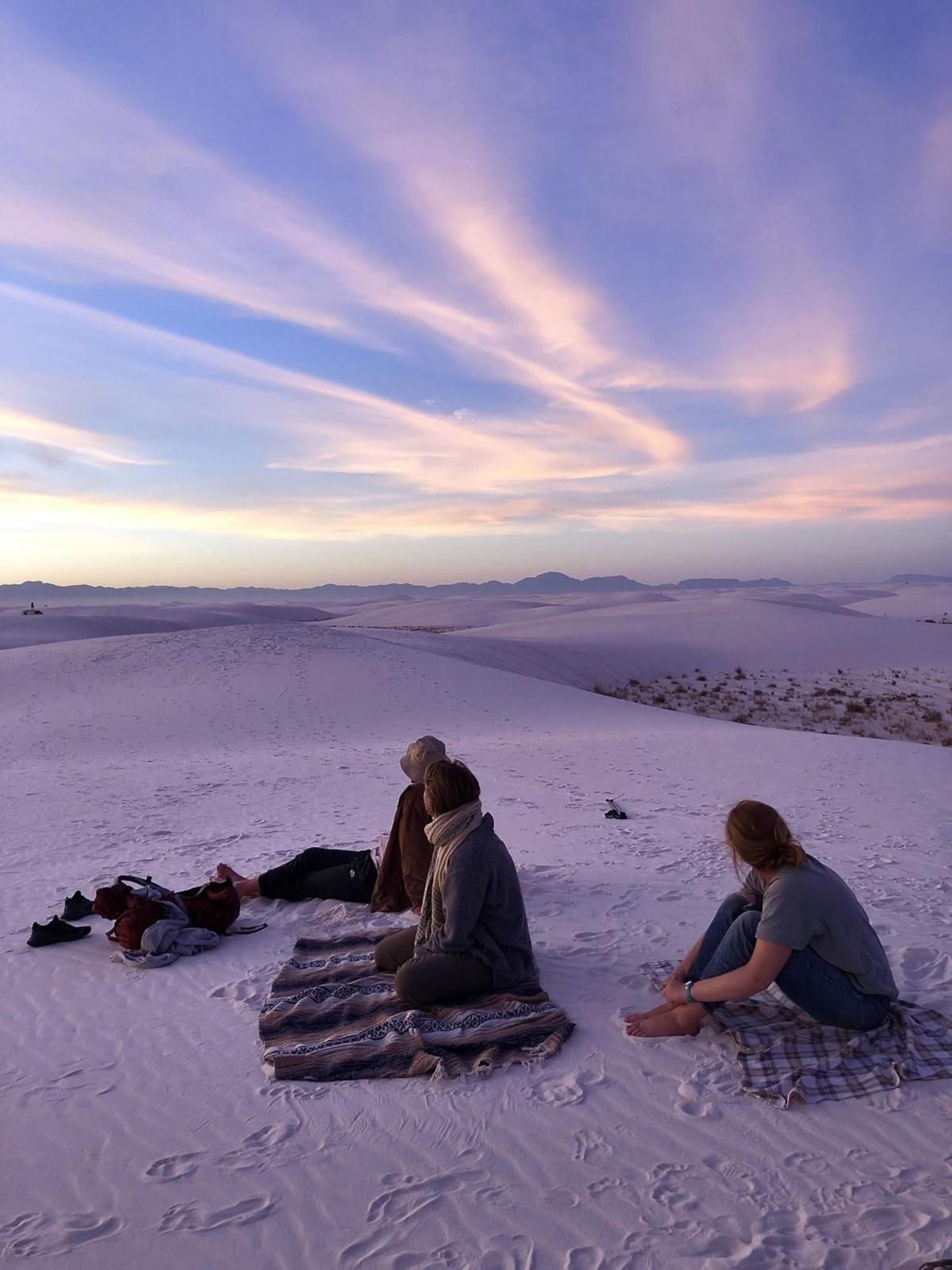 Campers catch the sunset on top of the dunes. 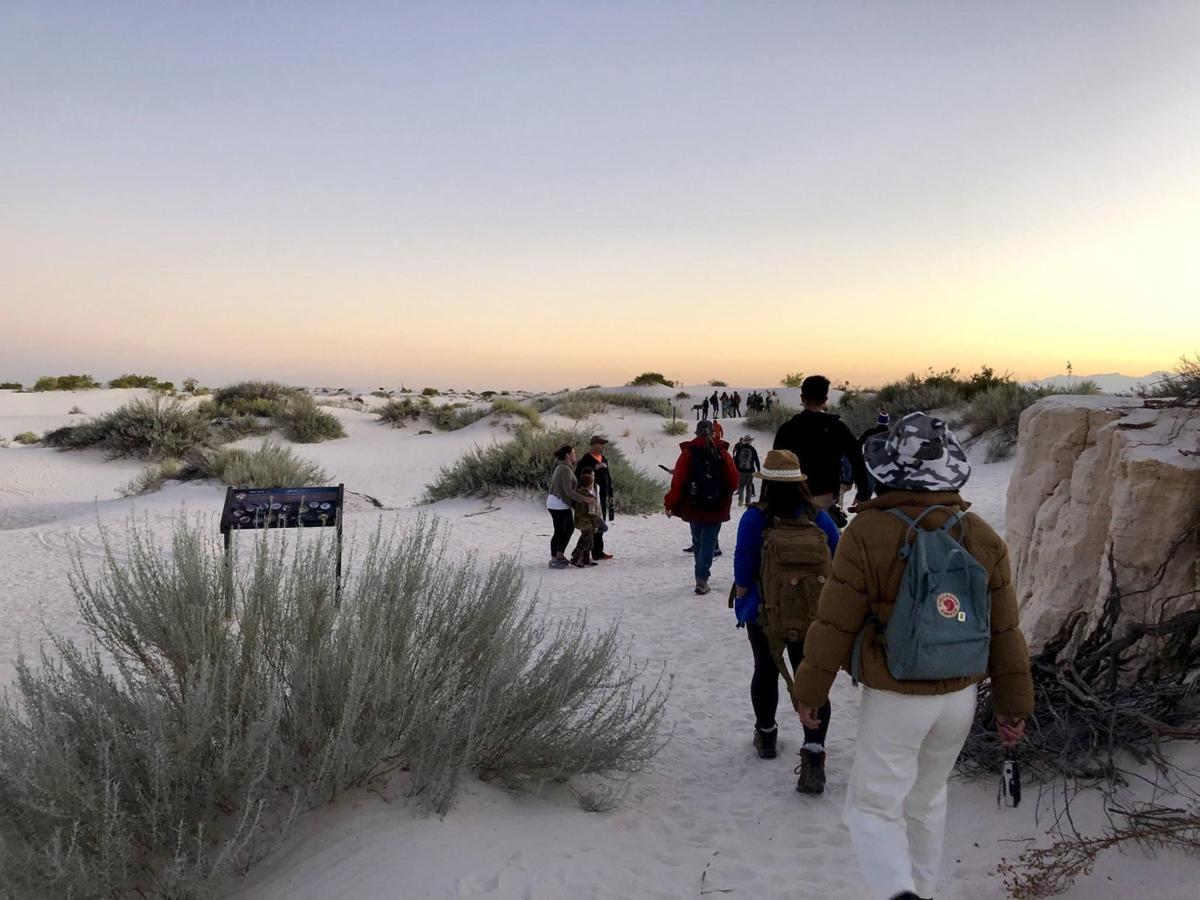 Trekkers make their way through White Sands on a full moon hike in October.

The historic building that greets visitors at White Sands National Monument near Alamogordo, N.M. The monument was recently elevated to national park status.