PULASKI COUNTY, Mo. • About 100 miles west of St. Louis along Interstate 44, the billboards for Meramec Caverns and the Jesse James Wax Museum give way to something different.

“We are having big fun in Uranus.”

“The best fudge is found in Uranus!”

Uranus isn’t a town. Uranus is a tourist attraction.

It’s kind of a strip mall gone delightfully, disgustingly wrong — or right, if you have that sense of humor. It’s just off exit 163, the Dixon exit. Route 66 enthusiasts, Lake of the Ozarks- and Branson-goers, students going to school in Rolla or soldiers going to training at Fort Leonard Wood can’t miss it.

Because Uranus is growing.

“Uranus is expanding,” say signs posted throughout the property. “Please excuse our mess.”

Uranus wasn’t always this big. The enterprise started in 2000 at Big Louie’s Burlesque Saloon, a strip club on the grounds of the old Mark Twain hotel-turned RV sales lot. It grew to include the Chicken Bones Party Bar and Grill and Skin City Tattoo Studio.

It was only when owner Louie Keen grew impatient with the construction progress of an outdoor outpost that in July 2015, he decided to add a fudge factory and call it Uranus.

“Honestly, I was the only one who believed in it,” says Keen of the factory. He says he’s “a crazy 50” with the mentality of an eighth-grade boy. “We couldn’t have called this Fat Bob’s Candy Store and do what we’re doing today.”

As soon as the Uranus billboards went up, even before they could make any fudge, people streamed in to buy T-shirts from Uranus. They tittered. They snorted.

Keen got his chocolatier certification online, and he made 1,200 pounds of fudge the first month. People came to Uranus and bought it.

“This thing has blown up way more than I ever expected,” he said in his deep, raspy voice.

They expect 250,000 visitors to the fudge factory this year.

“It’s edgy,” says a mild-mannered Beth Wiles, executive director of the Pulaski County Tourism bureau. She recommends Uranus to travelers who wander into the visitors center, but sizes them up a bit first. “There is a segment of the traveling public that just thinks it’s hilarious. But yeah, he’s a great marketer.”

“Thank you for picking Uranus!” the cheerful cashiers call out as customers chortle and stream into the parking lot.

Keen has since opened Mission Outpost Outdoor outfitters in Uranus, shooting and archery ranges, a food truck park and a competitive axe-throwing facility called the Axehole. Keen saw axe throwing online on a Friday, flew to Philadelphia to try it on a Sunday and started building the range on Monday. Competitive axe-throwing is like darts, but choppier.

A partner just opened an archery tag course, and they’re working on a Dr. Who-themed escape room inside an old double-decker bus.

Keen’s added a few dinosaur statues, a rocket and a vintage police car that says on its front fender: “To Serve and Protect Uranus.” This summer, the Guinness Book of World Records verified the world’s largest belt buckle in Uranus.

Keen wants to open a petting zoo, a brewery and a wedding chapel, where he can call himself Pastor Gas.

He voted himself in as the mayor of Uranus and loves bopping around the property greeting customers in an American flag-themed tie and cowboy hat, and making videos for Uranus’ social media sites. “I say it’s hard being a tyrannical dictator,” he says, “but it’s working out well.”

Keen is married with four kids, ages 1 to 14, and they live on 40 acres in nearby Lebanon. He wants to keep things family-friendly and just wants to make people happy.

If people complain, Uranus employees ask what they have against the planet. That flusters them.

The origin of Uranus

Keen grew up in Cassville in southwestern Missouri and worked seven days a week on his parents’ livestock farm. He remembers loving road trips and roadside attractions, and he particularly remembers a place called the Rock Shop by his great-grandmother’s nearby farm.

An adult pressed a switch to turn on a black light inside a box, and he peeked under a flap to see an assortment of glowing rocks.

“It was such an impactful memory,” he says. “That’s what I’m building here. I want to build something that has an impact, that makes you remember it.”

He hasn’t put a box of luminescent rocks in Uranus (“I’ll put it on my list!”), but he has brought in a unicorn skull, an alligator boy and a taxidermic two-headed goat.

“I’ve been looking for a two-headed goat for 15 years,” he says, motioning toward its display case in the fudge factory.

Keen went to military school because he was “a little guy and I don’t think like anyone else,” and he’s 16 hours short of a college degree.

He eventually opened a strip club, thinking it would be fun to get into the business so he could drink. But he realized he couldn’t do that and run a business.

The strip club has since moved to Uranus, and it opens late — families usually don’t notice it, Keen says. He doesn’t drink much anymore but still smokes, and says his best business meetings are conducted on smoke breaks.

He doesn’t have an office, and he won’t take a business card because he says he’ll lose it.

“My motto this year is ‘exceptional mediocrity,’ he says. “If you do something, it might be an A-minus or a B-plus. If I’m fighting so hard to get A's, sometimes I don’t get things done. I think we’ve been succeeding.”

About 70 people work in Uranus, as employees or contractors. Brian Garbinski is a retired Army sergeant major who served as a senior adviser to the Afghan National Civil Order Police. He’s now the unofficial deputy mayor of Uranus.

“Louie is fun. Louie speaks his mind,” says Garbinski, also a business partner and firearms instructor at the range. “He’s not really politically correct. Some people get offended by him. But they know it’s true.”

Steve Farris works as a DJ for Keen and works part-time as an emergency medical technician for Pulaski County. He had trouble getting his archery range business going out of his home. Keen offered to partner with him on it and let him build a range in Uranus. Farris appreciates Keen’s advice and advertising help.

“It’s something to bring families out,” Farris says. “There’s just nothing for kids to do here.”

Lindsay Teal, the marketing manager for Uranus, has expanded its online store and landed a deal where area hotels give VIP visitors fudge from Uranus. Teal manages Uranus’ social media sites and deletes visitor jokes if they get too offensive.

The most offended anyone really got, they said, was a woman who emailed them, insisting they were mispronouncing Uranus. Scientists and astrophysicists often say it the other way.

People like to push the envelope, she says, and any selfie snapped in Uranus is free advertising. Rapper Sir Mix-A-Lot tweeted about Uranus. So did actor George Takei. “Their fudge is out of this world!” he wrote.

And if people get offended by the billboards? They don’t have to stop in Uranus.

“Someone just taught me a great lesson how to be successful — that’s mind your own business,” Keen says.

Shelley and Frank Mesa from Rancho Cucamonga, Calif., passed through Uranus after flying into St. Louis and driving to Branson. A woman at an information center recommended it. “She said, ‘You’ll want to stop in Uranus.’”

They shook Keen’s hand and took a photo with him on the parking lot. (“Is he really the mayor?” she asked after he left.)

Mary Cox of Elk City, Okla., spotted the signs and giggled with her two sisters as they rode together on their way to Indiana. “This is a cute little stop,” she said as she stood just outside the factory, clutching a bagful of fudge.

Keen’s just happy he made a few more customers happy.

Much like the yellow-handled hatchets being thrown about at the Axe House in Valley Park, the quips come fast and furious.

Branson: Brighter than ever this Christmas

Long popular as Midwest America’s go-to place for country music, Branson, Mo., is staking its claim as home to the most spectacular and longes…

One newspaper's end leads to mess over another's name in Uranus, Missouri

After the Waynesville Daily Guide was shut down, a group backed by the Uranus mayor plans a new weekly newspaper with a controversial name. 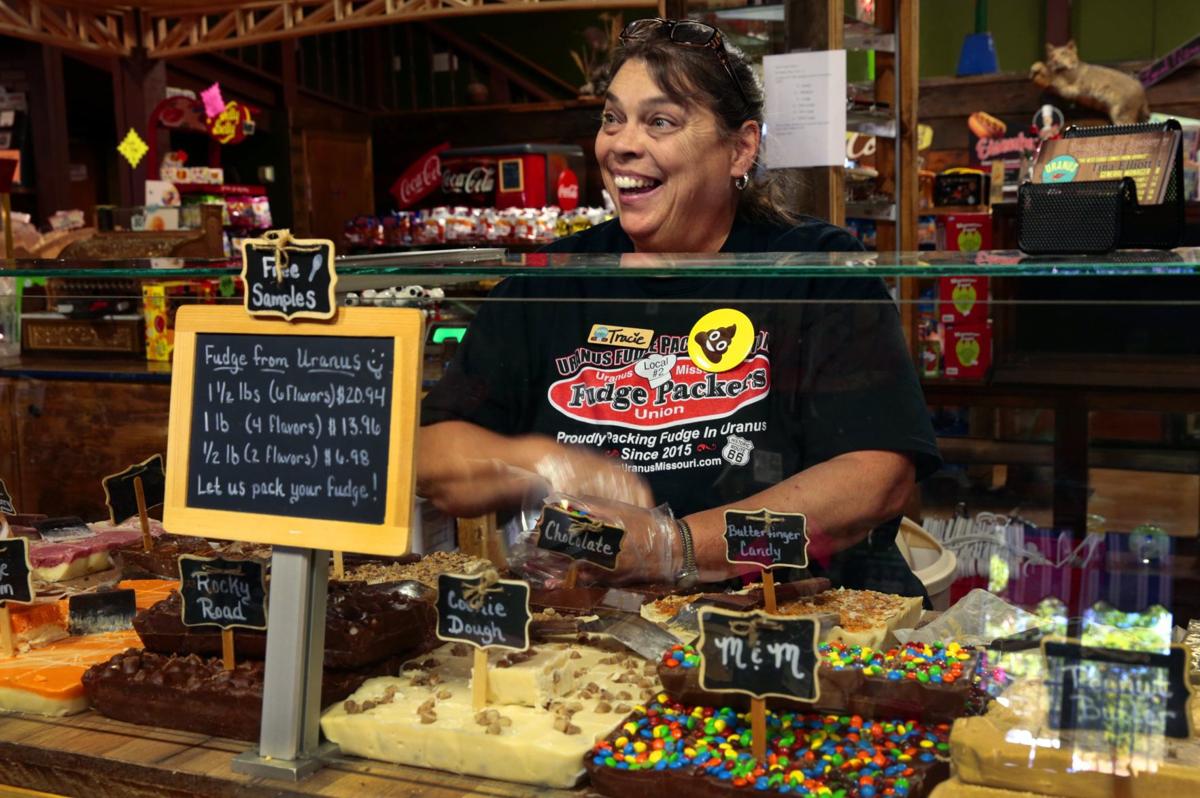 Tracie Yohn wraps fudge for a customer at the Uranus Fudge Factory in Saint Robert on Friday, Sept. 29, 2017. The growing Route 66 tourist attraction hosts families by day and adults by nightfall. The women who cut and box the fudge are known as 'fudge packers'. Photo by Robert Cohen, rcohen@post-dispatch.com 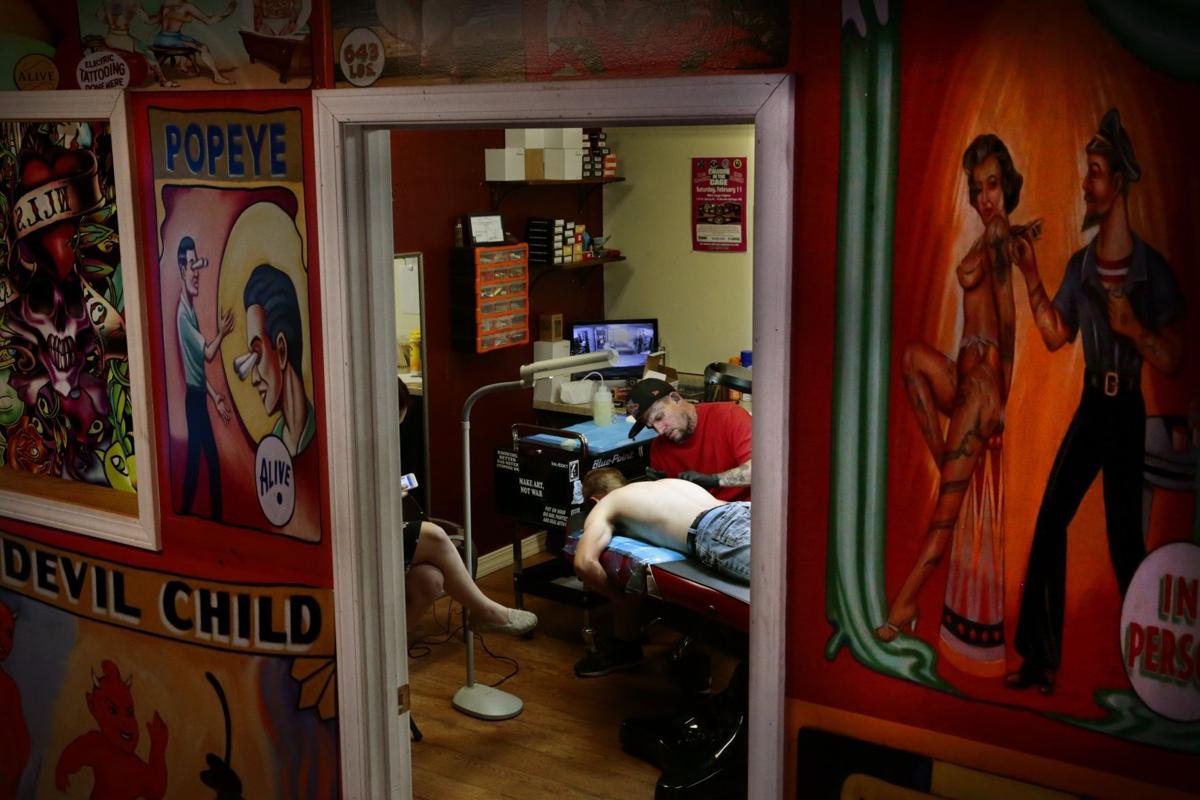 Artist Dustin Fishburn puts the last name of his client Rick (no last name given) across his back as Rick's wife watches at Skin City Tattoo Studio in the Uranus entertainment complex on Friday, Sept. 29, 2017. The growing Route 66 tourist attraction hosts families by day and adults by nightfall. Photo by Robert Cohen, rcohen@post-dispatch.com 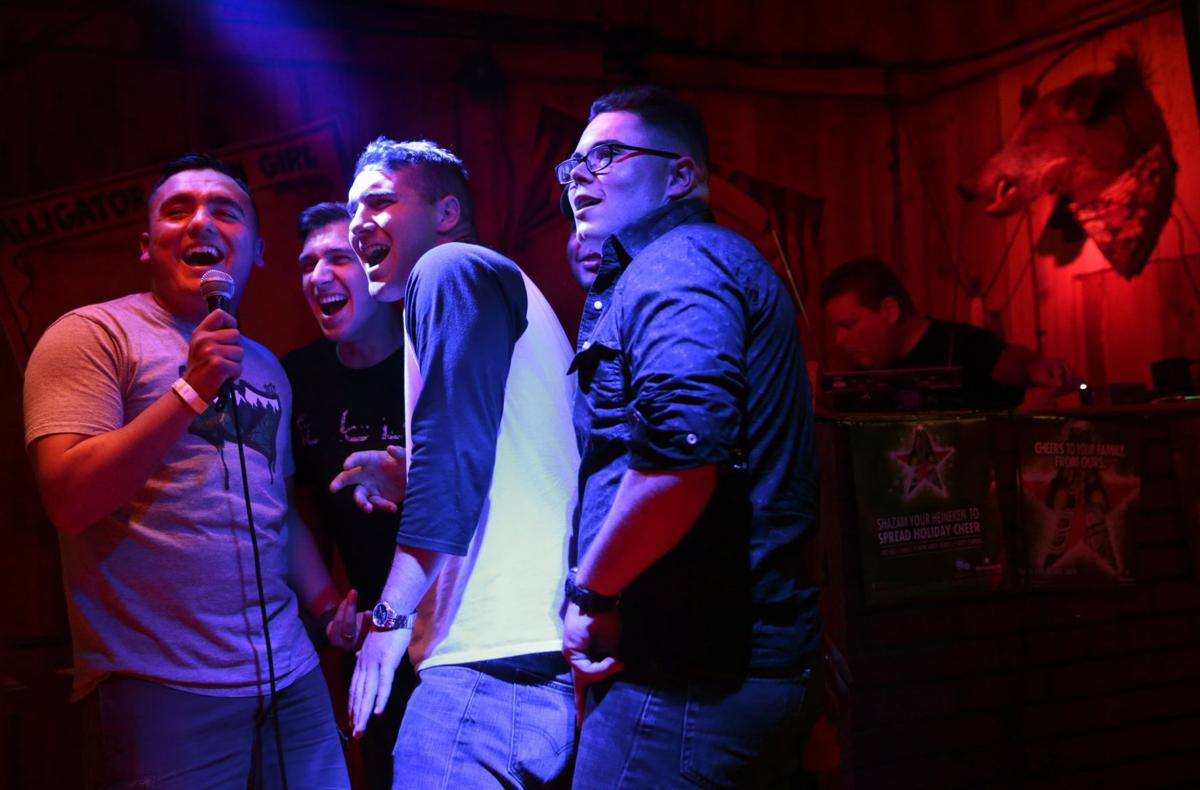 Soldiers from Fort Leonard Wood sing karaoke late into the evening at Chicken Bones Party Bar and Grill in the 'Uranus, Mo.' entertainment compound in Saint Robert on Friday, Sept. 29, 2017. The growing Route 66 tourist attraction hosts families in its fudge factory by day and soldiers by nightfall in its tattoo studio, burlesque club, and bar and grill. Photo by Robert Cohen, rcohen@post-dispatch.com 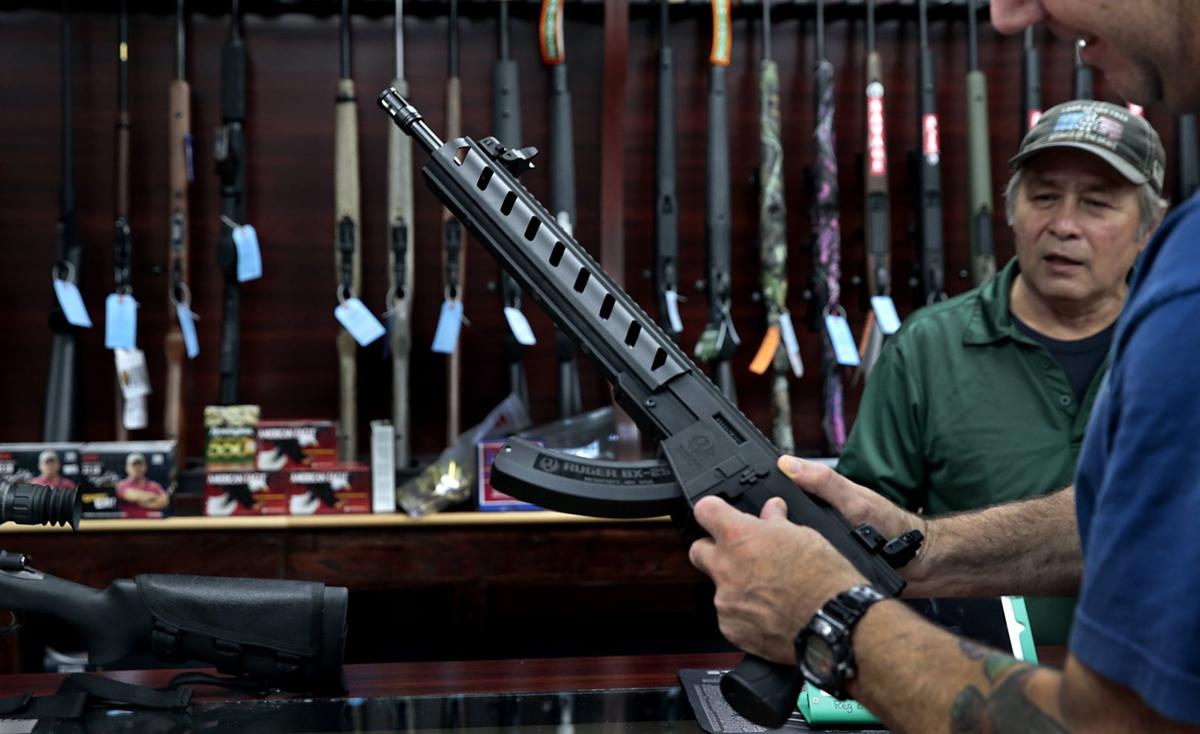 Walt Perry of Mission Outpost Outdoor Outfitters shows a customer a Ruger 10/22 folding tactical rifle at the store connected to the Uranus Fudge Factory in Saint Robert on Friday, Sept. 29, 2017. The growing Route 66 tourist attraction hosts families by day and mostly soldiers from nearby Fort Leonard Wood at night at its bar and grill, tattoo parlor and burlesque club. The outfitter offers an indoor gun range, where visitors can rent weapons or use their own. Photo by Robert Cohen, rcohen@post-dispatch.com 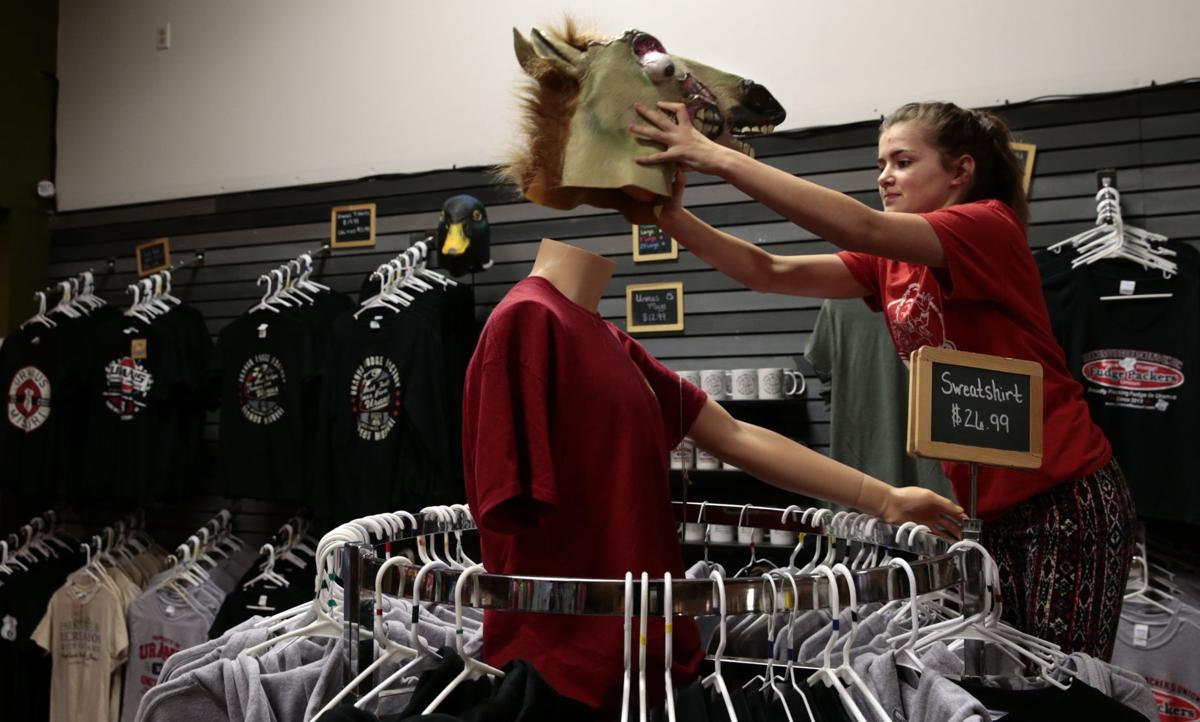 Felicity Houston finds a better head for a mannequin in the t-shirt department at the Uranus Fudge Factory in Saint Robert on Friday, Sept. 29, 2017. When owner Louie Keen opened the factory, before even being certified to make fudge, visitors flocked to the t-shirt area to pickup Uranus themed clothing. Photo by Robert Cohen, rcohen@post-dispatch.com 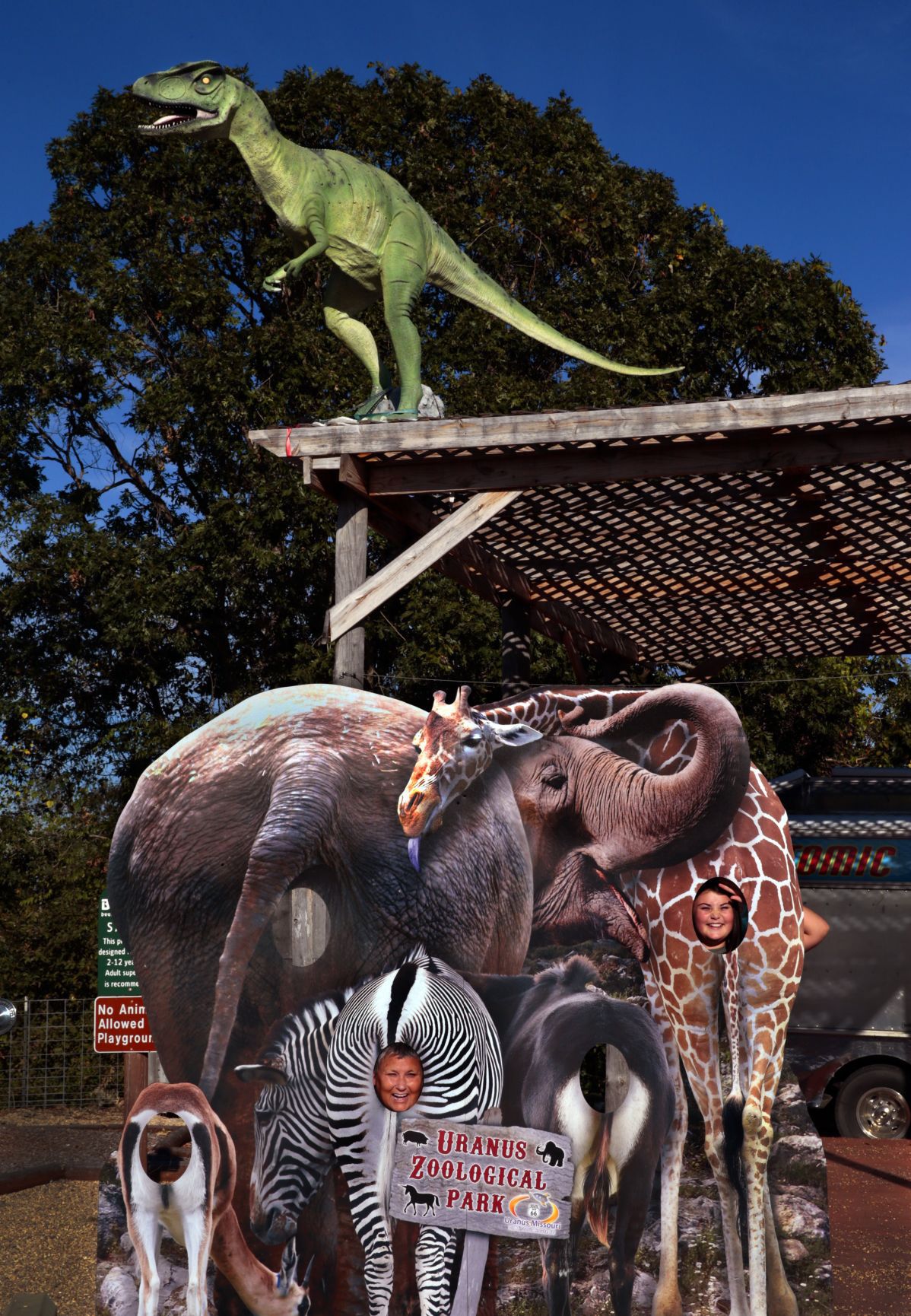 Susie Criss (center) and her granddaughter Alex Rohde have their picture taken by Alex's mother Tracie Rohde during a visit to the Uranus Fudge Factory and General Store complex in Saint Robert on Friday, Sept. 29, 2017. The Nebraska family was driving home on Interstate 44, when the tourist attraction caught their attention off exit 163, the Dixon exit. Photo by Robert Cohen, rcohen@post-dispatch.com 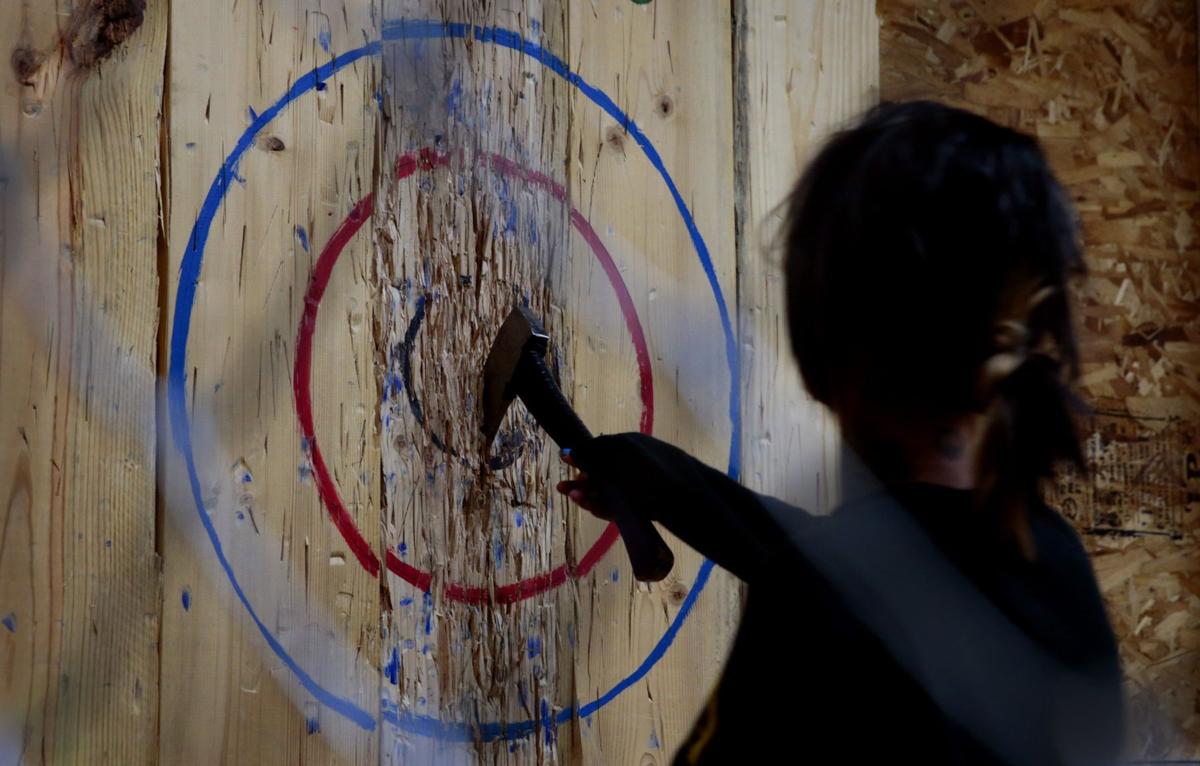 Uranus worker Ashley Newport removes her hatchet after tossing a perfect 5 point bullseye over and over at the Axe Hole throwing lanes inside Chicken Bones Party Bar and Grill in Saint Robert on Friday, Sept. 29, 2017. The growing Route 66 tourist attraction hosts families by day and adults by nightfall. The hatchet tossing is a more burly version of darts. Photo by Robert Cohen, rcohen@post-dispatch.com 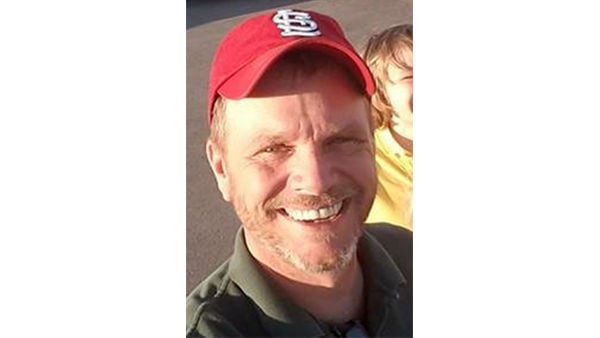