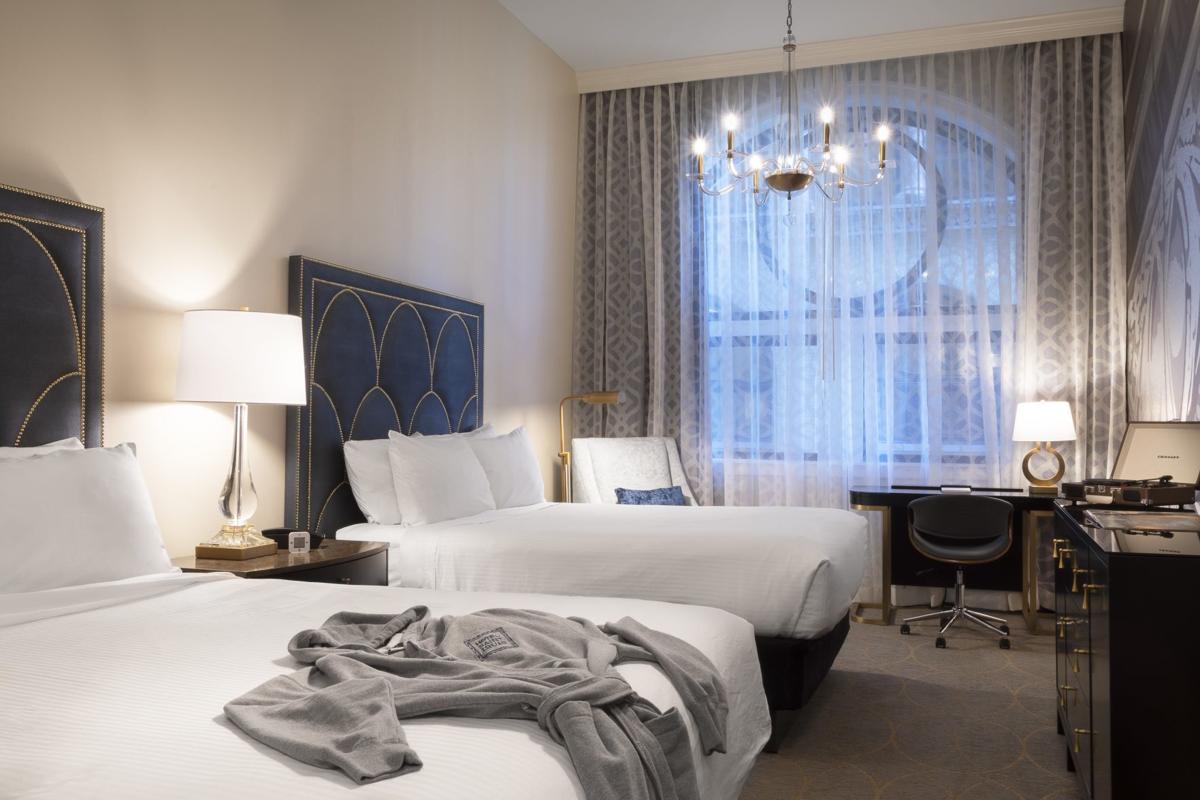 A bedroom at the Hotel St. Louis features, at right, a record player. 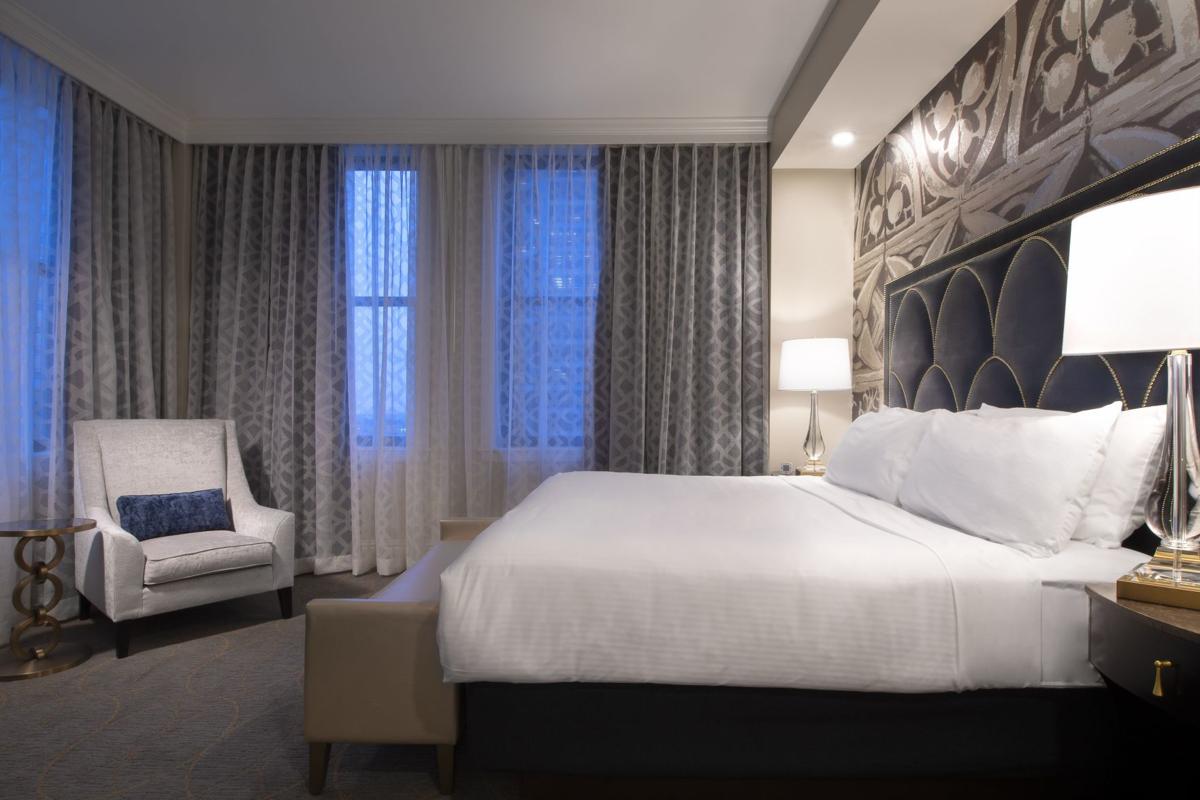 The rooms at the Hotel St. Louis are spacious and comfortable. Photo by Jim Corbett.

In 1893, Sullivan built the Union Trust Building on Olive Street; it was one of the world’s first skyscrapers. Like so many downtown buildings, it has now been turned into a luxury hotel, the Hotel St. Louis.

And what a luxury hotel it is. As the name suggests, it features the best of St. Louis — and more.

Sullivan’s stylistic flourishes are everywhere, from the spectacular elevator doors to the unmistakably Sullivanesque architectural filigree that adorns the top and which is visible from the rooftop bar and pool.

The rooftop bar, called Form (Sullivan famously said “form follows function”), has a decent view but a few notable problems. Getting to a restroom requires a long and labyrinthine trek down to another floor. Drinks are served in plastic, and on warm days the air condenses on the air conditioning duct and drips on customers at the bar.

The fitness center is smallish but adequate. There is also a spa off the lobby, but it is closed on Sundays and Mondays, which were the days I was there.

The rooms come with an honest-to-God record player, plus a handful of vinyl records (my room had Sarah Vaughan’s “Dreamy,” which includes “Stormy Weather,” Donna Summer’s “On the Radio” greatest hits album, the soundtrack to “Miami Vice” and more). The room also boasted the most light I’ve seen in a hotel room in years, including a chandelier.

The king-size bed was spacious and exceedingly comfortable. It was situated directly across from a television the size of a ’58 Chevy. The TV had an enormous selection of channels, including TCM (in my book, that’s the sign of a grand hotel) and dozens of channels I’ve never heard of — a Scientology channel, infomercial channels, a rural channel, Celebrity Shopping Network and a channel for babies.

The minibar, tucked into a Asian-inspired armoire, features St. Louis favorites Red Hot Riplets ($3 for a small bag), Bissinger’s chocolate and Billy Goat chips along with some national brands.

Room service runs until 4 a.m. and offers an abbreviated version of the main restaurant menu. Included on the menu is a gluten-free gooey butter cake.

It is certainly a fastidious fixture. I found it intrusive and embarrassing and also hysterically funny.

Otherwise, the bathroom is fabulous, from the marble floors and tiles to the digital scale, lighted magnifying mirror, ultra-cool ramp sink and the TV in the mirror (also a sign of a grand hotel). The soap and shampoo smell like champagne, but the water pressure in the shower was curiously low.

Union 30 inside the new Hotel St. Louis is laudably local, but execution lacks

Union 30, named for the building’s original occupant, is an airy space that is sophisticated but not quite welcoming. In the center of the room is the well-stocked bar, including four small barrels of barrel-aged cocktails. Ask the bartender for the insanely delicious sweet and spicy trail mix.

The something-for-everyone menu may have more gluten-free items on it than are absolutely necessary — maple seared duck and waffles sounds amazing, but can’t the waffles be made with wheat flour? —but it also features the best of St. Louis: pork steak (Tuesdays only), Missouri catfish, Mr. B’s salsa, Tony’s Family Farm tomatoes, Serendipity ice cream.

I had the massive, smoked, bone-in, beef rib. It was so savory that I ate the whole thing. Then I was so full I couldn’t have breakfast the next morning.

It’s close enough to Busch Stadium to hear the fireworks when the Cards hit a home run against the team you are rooting for. Sigh.

If the “Do not disturb” sign is on the door, housekeepers should not bang on the door three hours before check-out while you are still asleep. How hard is that? Waking up the guests by hammering away on the door in an apparent effort to get you out of the room is most disturbing.

Bring it on home: Nepal

Who and where • Preston Bilheimer of St. Louis went to Nepal for a mountain biking expedition. Here, he’s descending from Pikey Peak, Sagarmat…

Follow the footsteps of 'Little Women' on a pilgrimage in Massachusetts

A rural New England cemetery is not where you'd expect to spot four-time Oscar nominee Saoirse Ronan and other Hollywood A-listers on a crisp autumn day.

Take off with a soaring trip to Wichita, Kan.: the 'air capital of the world'

WICHITA, KANSAS — Before my recent visit all I knew about Wichita I learned from the Westerns I watched as a kid. I knew Wichita was a “cowtow…

Hotel design trends: Lobbies and rooms with a point of view

Hike it, ride it, kayak it: 3 ways to see the Arizona desert

What's one thing Arizona has that St. Louis does not have this time of year? Sun. And warm weather and cacti and mountains. In short, a desert climate.

A bedroom at the Hotel St. Louis features, at right, a record player. 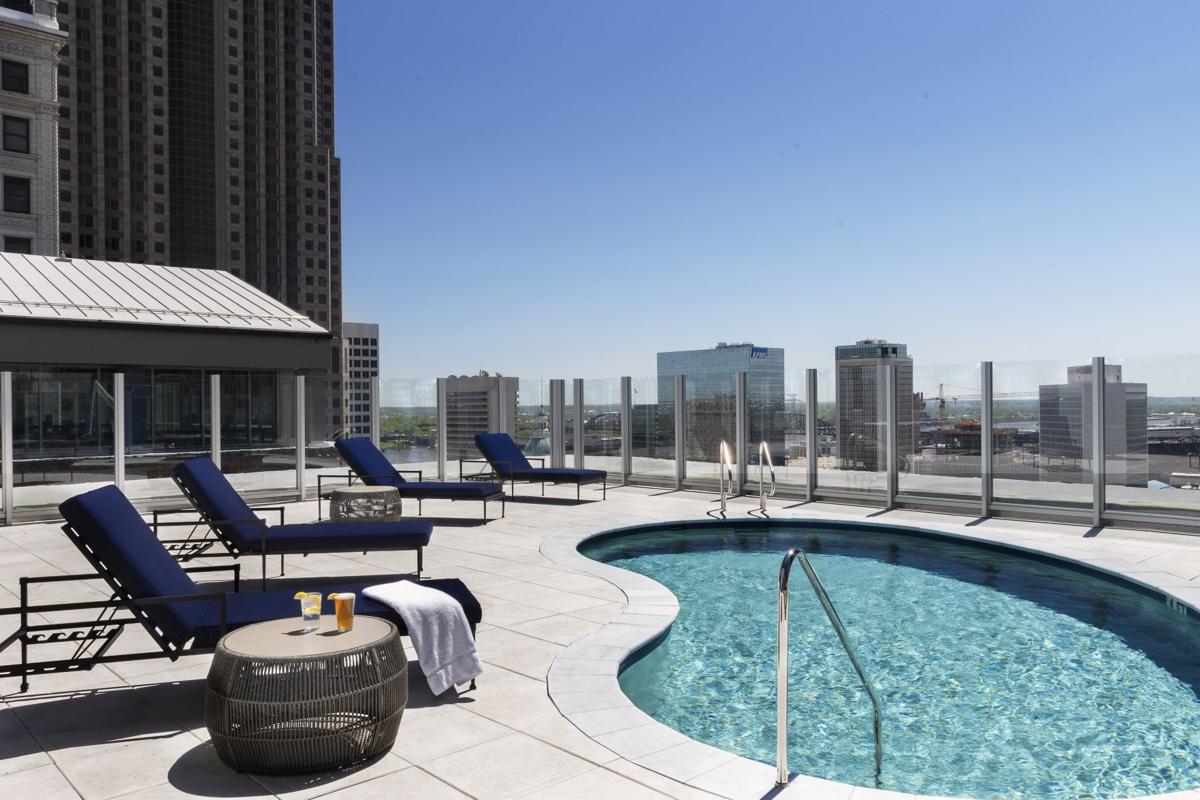 The rooftop pool at the Hotel St. Louis is compact, but offers a decent view of downtown St. Louis. 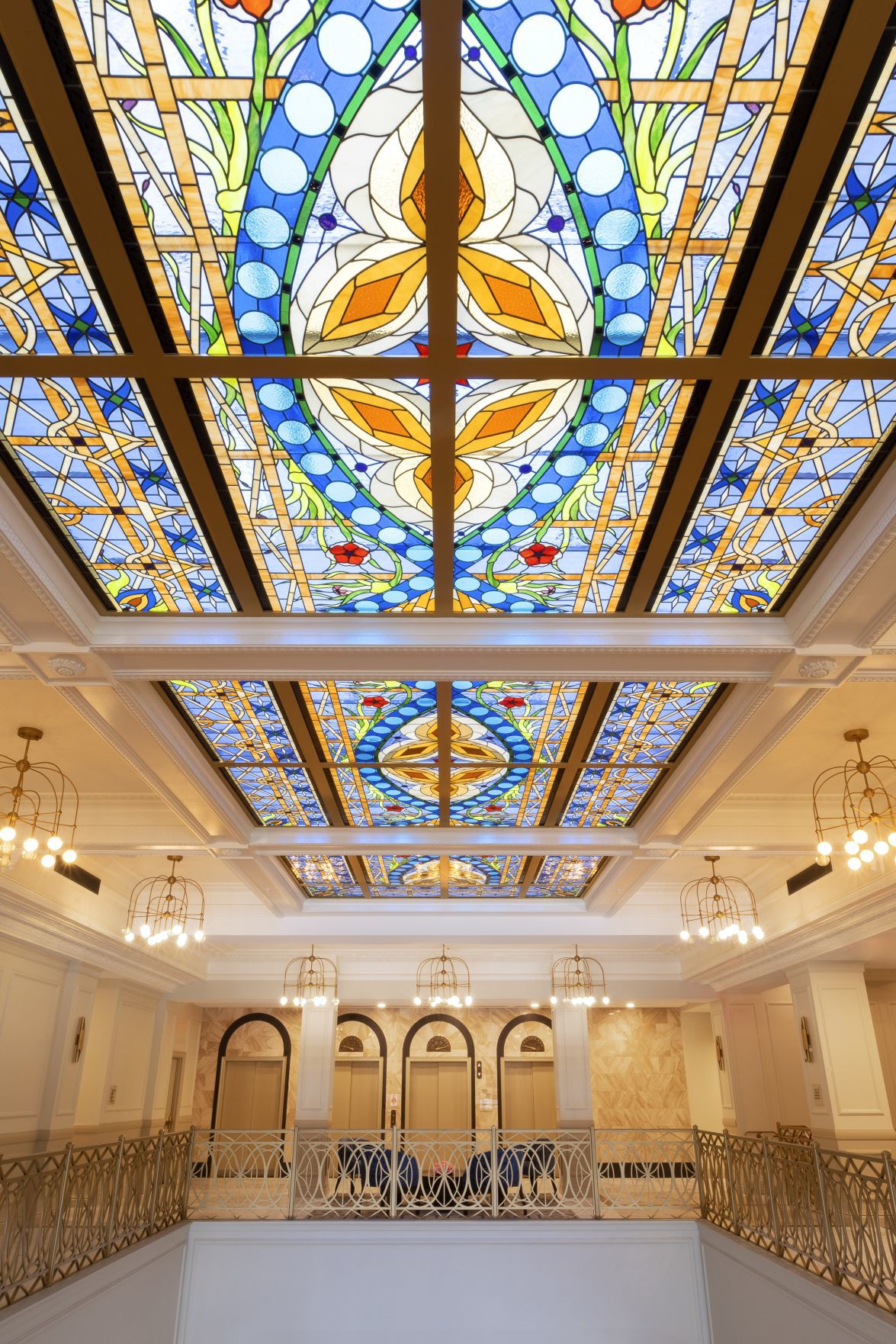 The stained-glass skylight over the lobby of the Hotel St. Louis is faithful re-creation of the original skylight.

The rooms at the Hotel St. Louis are spacious and comfortable. Photo by Jim Corbett. 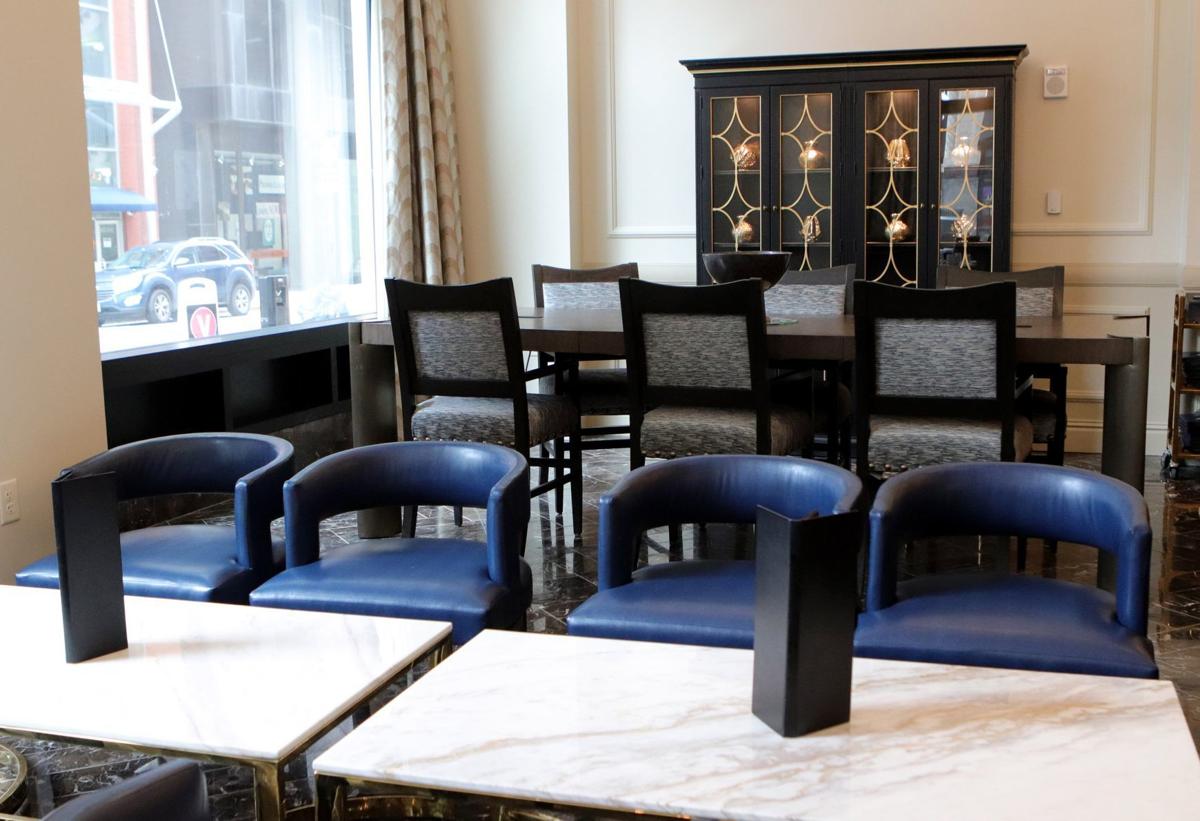