The Super Bowl is one of the biggest sporting events each year. While most Americans watch the big game with family or friends, some devoted football fans attend in person. Super Bowl LVI will be held at SoFi Stadium in Los Angeles on Feb. 13, 2022. If you're planning to be there in person, here's how to make the trip to Super Bowl LVI on a budget.

Flying to the Super Bowl

There are many airport options to choose from when traveling to Southern California. Unfortunately, some airports are further away from SoFi Stadium in Inglewood, California. But, they can be worthwhile options depending on the routing, pricing and award availability.

The airports serving the Los Angeles area include:

LAX generally has the most flight options since it is the largest airport in the area. However, Bethany Walsh, a travel rewards expert at BougieMiles.com, says, "smaller airports can offer competitive pricing and routes, depending on where you're traveling from. They also tend to have less congestion at the airport, which can reduce the stress of flying."

Flying to LAX with points and miles

Southwest has nonstop flights to LAX from 28 cities as far east as Nashville. The price of flights varies by day and route. For example, you could book round-trip flights from Phoenix to Los Angeles for less than 8,000 points for Super Bowl weekend, leaving on Friday, Feb. 11, and returning on Monday, Feb. 14. 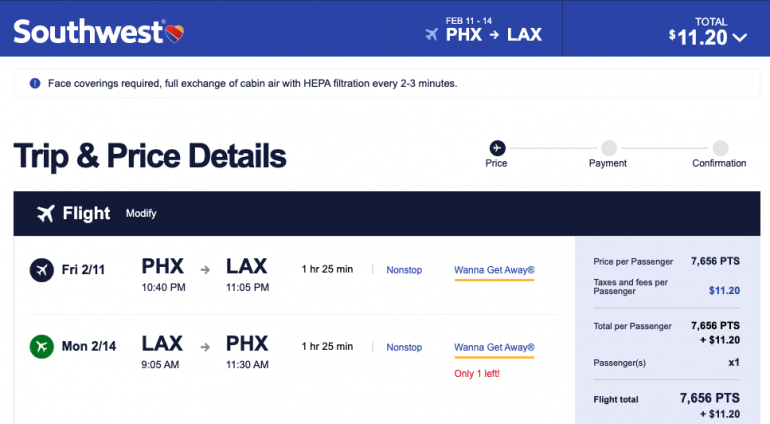 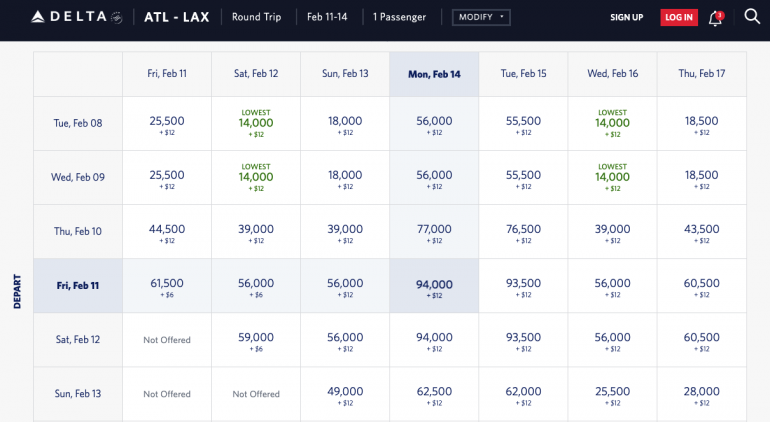 Meanwhile, round-trip from Boston to Los Angeles could probably run you at least 30,000 miles on United for travel from Friday to Monday. 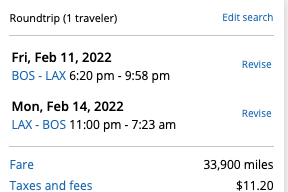 Flying to Long Beach Airport with points and miles

Since LGB is the next closest regional airport, it's another viable option. You can fly to LGB nonstop from 16 destinations on four airlines:

Three of these nonstop destinations — Honolulu, Maui and Phoenix — are serviced by more than one airline.

Travelers have the most options on Southwest; its nonstop flights to LGB range from California cities like San Jose, Oakland, and Sacramento, to farther destinations east, like Chicago, St. Louis and Houston.

Southwest flight costs vary based on travel dates and your departure city. For example, you can find flights from Chicago-Midway to LGB on Thursday, Feb. 10, starting at only 3,458 points and a return flight on Tuesday, Feb. 15, beginning at 2,686 points. Travelers with flexible schedules can find the cheapest flights with the Southwest Low Fare Calendar.

American Airlines operates many hubs across the country and two of them offer flights that fly directly into Long Beach: Dallas-Fort Worth and Phoenix.

It can be challenging to book hotel rooms with points during Super Bowl weekend in many cities. However, because Los Angeles is such a large city with many hotels, you can find availability for almost any loyalty program. Even so, you may have to stay further away depending on the hotel brand.

Marriott hotels within five miles of the stadium

Marriott lists 172 hotels when searching for Inglewood; however, the options considerably shrink if you want to stay close to the stadium. Marriott has 20 properties within five miles of the stadium. Unfortunately, only one has rooms available if you wish to use Marriott Bonvoy points to book your stay: The Four Points by Sheraton Los Angeles International Airport. 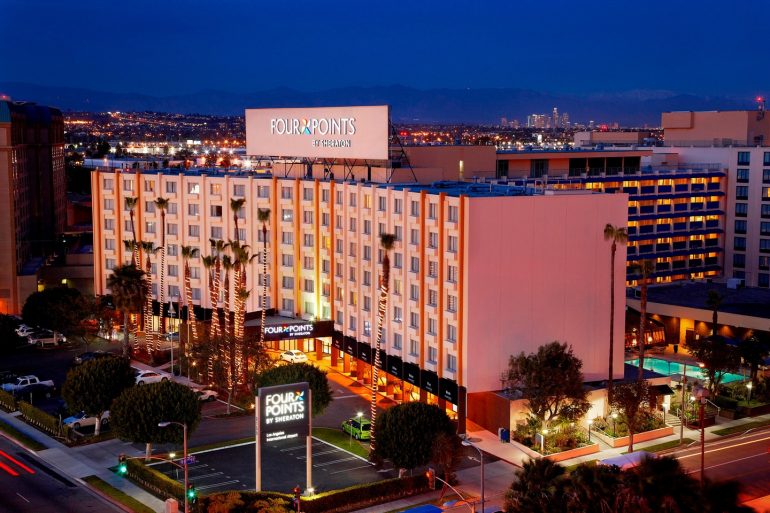 This hotel is only 2.1 miles from Inglewood and it is conveniently located near LAX.

Cost to book in points: This property is a Category 5 hotel with rooms at 40,000 points per night. When booking any Marriott hotel with points, you'll receive the 5th night free — a 20% savings on points. So, for example, for a five-night stay from Thursday to Tuesday, you'd redeem the 5th-night-free benefit and pay 160,000 Marriott Bonvoy points.

There are no additional charges, except for the daily $40 fee for parking. However, if paying in cash, you will shell out $484 per night, for a total of $2,423, including all taxes and fees.

Hilton's website returned 27 properties in the Los Angeles area for Inglewood searches, but only 13 are within five miles of the city. In addition, most of these hotels are sold out for the big game weekend. So, your options are limited if you want to book a Hilton hotel during Super Bowl weekend with points. 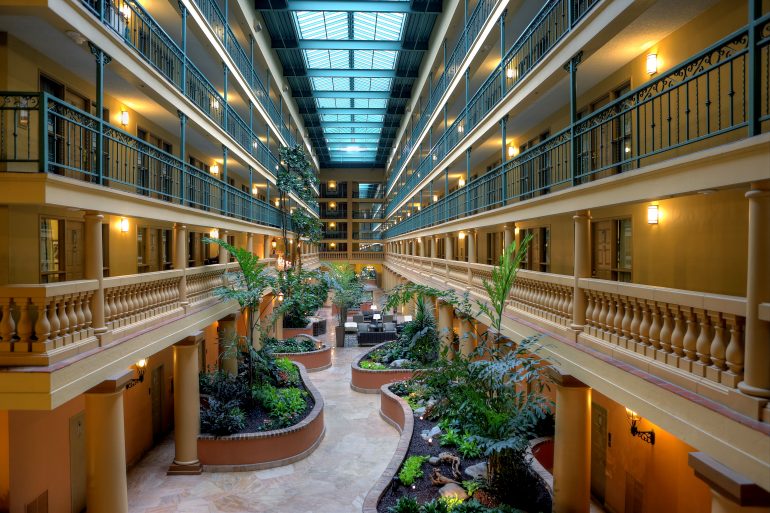 The Embassy Suites by Hilton Los Angeles International Airport South is your best option, only 3.5 miles away from Inglewood. Embassy Suites offers more space than most standard hotel rooms because every unit is a suite with a separate bedroom and sitting area. Plus, Embassy Suites is known for its complimentary evening happy hour and made-to-order hot breakfasts.

Cost to book in points: Hilton doesn't have a set award chart, but rooms tend to cost between 38,000 and 50,000 points. If you have Hilton Honors Silver status or higher, you'll receive the fifth night free on an award stay. A cash reservation would cost around $393 per night, or a total of about $1,965, for five nights from Feb. 10 to the 15th including taxes and fees.

Hyatt hotel close to the stadium 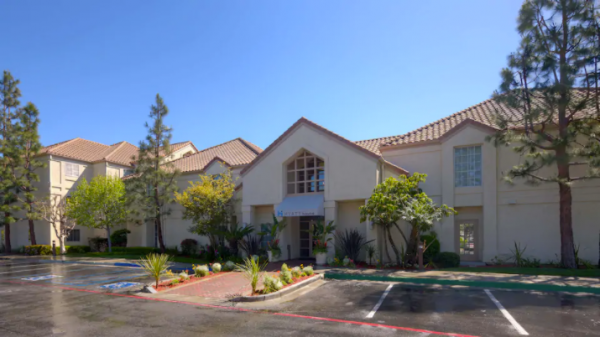 Hyatt has six properties within five miles of Inglewood. Of these properties, four are sold out and only one allows rooms to be booked with points on Super Bowl weekend — The Hyatt House Los Angeles/LAX/Manhattan Beach.

This Hyatt House property offers a two-bedroom, two-bath trio suite ideal for families or friends traveling together. These large suites also have a living area and a fully-equipped kitchen if you want to make any meals during your stay.

Jon Nickel-D'Andrea, the first class cabin enthusiast behind NoMasCoach.com, advises against cash and points redemptions like this. Instead, he says, "you're better off saving your Hyatt points for a higher-end redemption, as you would be receiving almost 25% less in value for your points by booking this room."

It is possible to travel to the Super Bowl on points and miles because Southern California has many airport and hotel options. Major domestic airlines fly into LAX and several of the most popular also fly into Long Beach, a smaller airport close to the stadium. So your best option is to compare flights to airports serving the Los Angeles area and find the one that matches your schedule and offers the best deal.

Hotels in Inglewood close to SoFi Stadium may be tough to book with points, so expand your search to nearby cities. In addition, some credit cards have travel portals that allow you to book hotels with flexible points, which opens up even more options for your stay.

The article How to Travel to Super Bowl LVI on a Budget originally appeared on NerdWallet.

Watch Now: Tricks to get the most out of your tech devices

Watch Now: Tricks to get the most out of your tech devices

Five of the best foods for lowering blood pressure

Five of the best foods for lowering blood pressure

Here are five steps money experts recommend to help you reach your money goals in 2022, plus more of the week's best financial reads.