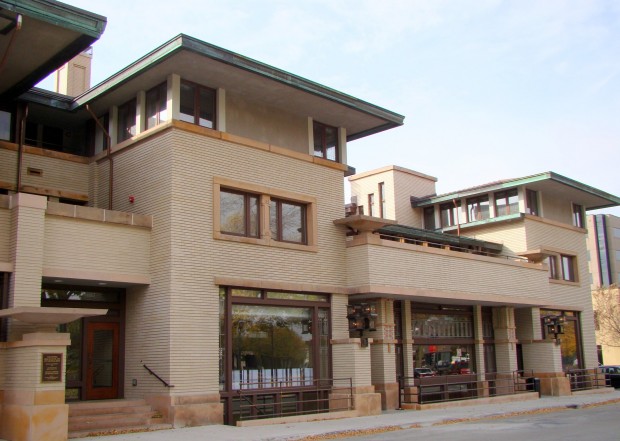 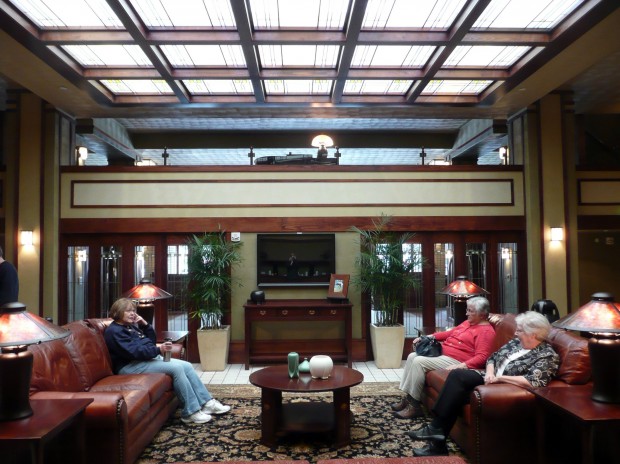 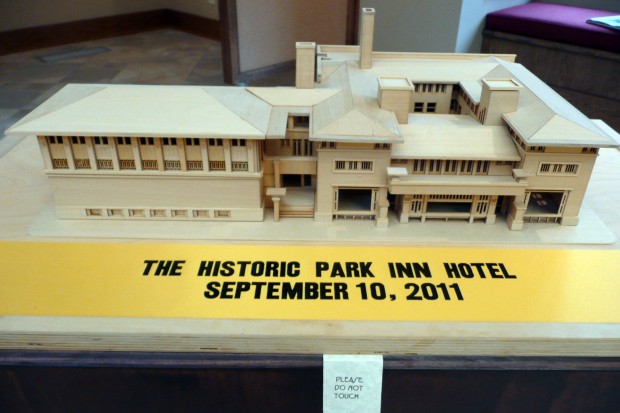 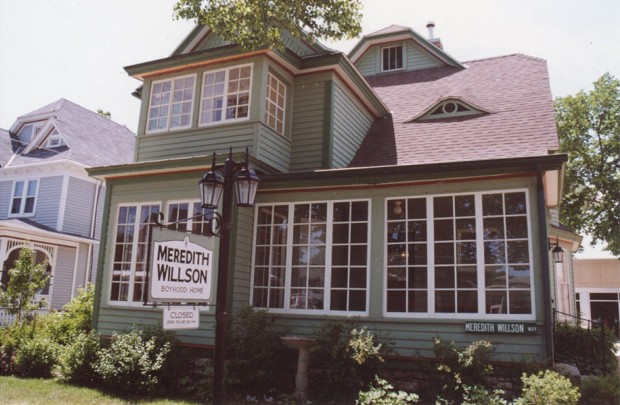 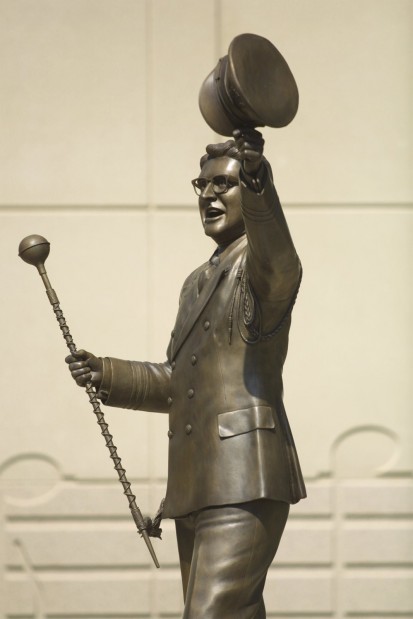 A statue of "The Music Man" composer Meredith Wilson is the centerpiece of The Music Man Square.

MASON CITY, Iowa • This town of 28,000 knew it had something special in the world's last standing Frank Lloyd Wright-designed hotel, but it also had a problem. The hotel was a decrepit shell.

For years no one quite knew what to do with the building that had slid slowly into decline since its heralded opening in 1910: from a hotel to stores and offices to apartments and, finally, by the 1970s, a shuttered mess.

There was talk of knocking it down. There was a suggestion — and failed attempt — to sell it on eBay. Finally, a group of locals created a nonprofit group and pledged to restore the building to its early glory. The city sold it to them for $1 and bid them luck.

Close to $20 million later — mostly the product of grants and fundraising — they've kept their word, and the Historic Park Inn has risen again, re-establishing an unlikely bond between a small Iowa town and our nation's most iconic architect.

But Wright's Mason City legacy is much more than one hotel. During his brief time here, the native Midwesterner also designed a single-family house for the Stockman family that has been restored with period-era furniture and is open for public tours.

Also, several of his disciples followed Wright to Mason City to work on the hotel, and they too were commissioned to design single-family houses. The product of such an influx of world-class vision made Mason City Iowa's unlikely capital of Prairie School architecture.

Until the hotel reopened last year, all Mason City lacked was a centerpiece tying its architectural riches together. Now the Historic Park Inn draws both long-distance travelers and natives to explore Wright's genius.

"When we heard it opened, we knew we had to stay here," said Bryan Morrow Way, 69, back in town from Las Vegas for a school reunion.

"You don't think of someone famous doing things like this in small towns," said his wife, Kathy, 65.

Driving into town, you'd never know you were entering an architectural hot spot. Mason City's edges were made of the same strip malls and gas stations you'd find anywhere. But deeper into the city, you begin sensing an inventiveness you rarely see in Midwestern homes in towns of this size. Most stunning, of course, is the hotel in the heart of town, a long, elaborate yellow brick behemoth across from the grassy town square.

The restoration was an exacting effort that knew when to reproduce yesteryear and when to leave things alone. In some hands, for instance, the low-ceilinged lobby would have been gutted and converted to a luxurious space. Here it remains in a simple, stark condition that makes it easy to imagine the original version. In any other hotel, the dark scuff markings in the lounge floor just past the lobby would be appalling; here they're history, showing Wright's original vision and layout of the room. Though a little dingy, it's something you wouldn't dare replace.

The rest of the hotel toes closer to comfort, if not luxury. Clean and well-appointed in handsome dark wood, it all merges somewhere between elegant and cozy as you're reminded at every turn you are in a Frank Lloyd Wright space: muted colors, wood trim, countless right angles (even in the light fixtures) and long windows. The common spaces, too, are handsome and engaging.

The sleeping quarters are roomy and comfortable, highlighted by such modern conveniences as bedside lamps with dimmer switches and MP3 docks. Even the bars of soap have Wright-esque recessed ridges.

In truth, you need a night to fully appreciate the hotel and soak up the detail, such as the mezzanine that seems to float above the front desk. Besides, when there's only one Wright hotel, it becomes more than a place to stay. It becomes an experience.

Getting there • A car is needed to get to Mason City, which sits off Interstate Highway 35 in the north-central part of the state, just south of the Minnesota border. It is 350 miles northwest of Chicago.

Eat • Chop (11 South Delaware; chopmasoncity.com) is a solid steak house with local beef and pork. My favorite spot, which is just across a courtyard from the Wright hotel, was Ralph's Garden Cafe (5 South Federal Avenue), which serves a fresh, no-frills breakfast and lunch before transforming into a white-tablecloth dinner destination with a couple of local beers on tap.

Stay • The Historic Park Inn (15 West State Street, 1-800-659-2220, historicparkinn.com; wrightonthepark.org), of course. The hotel has 27 rooms that vary in size and layout, but the amenities are consistent. Also, the common spaces are beautifully restored to conditions worth lounging. Rates: $100 to $275.

Do • Mason City is known for two things: architecture and the Tony-award winning musical "The Music Man." Meredith Wilson, author of the musical, grew up in Mason City and has been honored with The Music Man Square (308 South Pennsylvania Avenue; themusicmansquare.org), which includes a museum and tours of Wilson's boyhood home. Otherwise, in Mason City, architecture is king. The Wright hotel alone is worth the visit, but there's much more Prairie School architecture to see. Touring the Stockman House (530 First Street Northeast; stockmanhouse.org) is a must, but seeing the rest of Mason City's best architecture also is worth the time. Head to the MacNider Art Museum (303 Second Street Southeast; macniderart.org) and buy a walking tour guide to see the best of Mason City architecture, including the unforgettable Melson House (56 South River Heights Drive).

These pet products are unnecessary, according to vets

Adventures in Iceland, a real-life land of fire and ice

Even before we left for Iceland, we’d seen the photos and the videos of the wild, erupting Fagradalsfjall volcano, with its blazing red rivers…

An easy five-hour drive from St. Louis, Des Moines offers plenty to do in a long weekend getaway.

Bring it on home: California

Will You Need a COVID-19 Vaccine Booster to Travel?

You don’t need vaccination against COVID-19 — better yet a vaccine booster — to simply cross the Golden Gate Bridge into San Francisco. But tourists and locals alike will soon…

Go away with ... Charles Brice

Charles Brice portrays a CIA hacker in the new Netflix spy series, “In From the Cold." He describes his character as "trustworthy, loyal, unafraid to speak his mind and he loves his momma dearly." As for himself in real life, Brice said he's "as skilled in technology as any millennial who grew up during the time of Myspace and AOL Instant Messenger. Chris, on the other hand, is not only a highly skilled hacker — he is one of the best, which is exactly why Chauncey (Cillian O’Sullivan) conscripts his services." The Brooklyn resident will also be seen in the third season of Showtime's "City on a Hill."

Ask a Travel Nerd: Can I Travel Without a COVID Vaccine?

A statue of "The Music Man" composer Meredith Wilson is the centerpiece of The Music Man Square.