The B. Harley Bradley House in Kankakee, Illinois, was designed by Frank Lloyd Wright in 1900. Its owners, the nonprofit Wright in Kankakee, claim it is Wright’s first prairie-style residence. 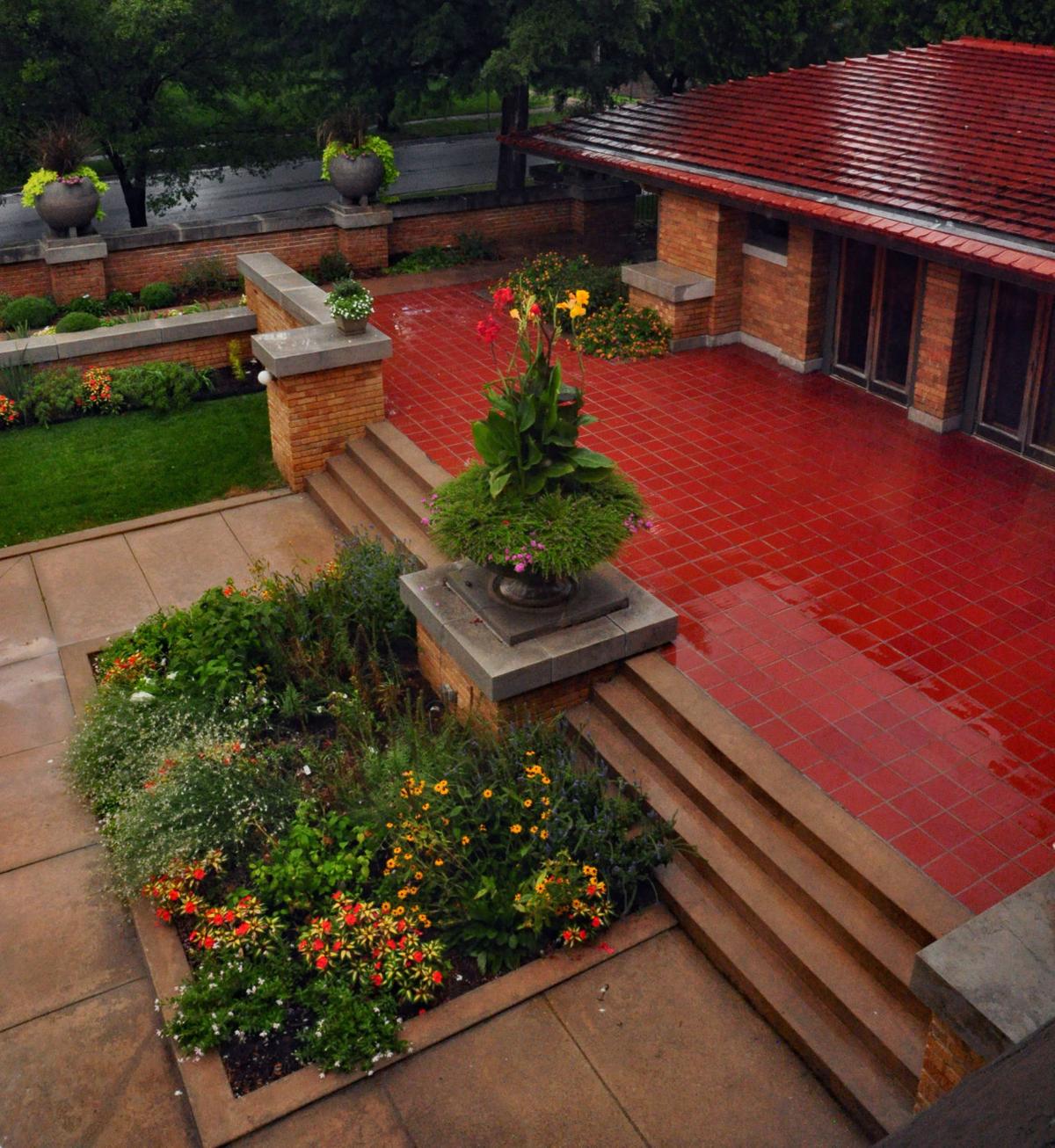 By Katherine Rodeghier Special to the Post-Dispatch

Frank Lloyd Wright enjoyed a long and stellar career, a good chunk of which he devoted to his signature prairie style of architecture. Two homes claiming to be the first and the last of this type still stand in the Midwest, though hundreds of miles apart in Wichita, Kansas, and Kankakee, Illinois.

Tours of both show off elements of this distinctive style: horizontal lines, earth tones, overhanging eaves and rows of casement windows. A visit to each reveals similarities but also demonstrates how Wright’s work evolved over the nearly two decades he spent tinkering with this particular design.

Wright’s career spanned more than 70 years and left an indelible mark on the architecture of the 20th century. He drew blueprints not only for houses but also for schools, churches, hotels, office buildings and museums. Of his 1,141 designs, 532 were built. His prairie-style houses came on the scene at the turn of the last century.

Kankakee’s B. Harley Bradley House was designed by Wright in 1900 and claims to be the first of his prairie-style period, though some students of Wright’s work disagree. They point to the Ward W. Willits House, dating from 1901 in Highland Park, Illinois, as his first mature prairie-style work. Robert G. Bohlmann, executive director of the owner of the Bradley House, the nonprofit Wright in Kankakee, stands firm: “We have copies of Frank Lloyd Wright’s original drawings for the house, and they are dated June 1900.”

Whatever. The Bradley House is open to the public; the privately owned Willits House is not.

Ironically, the money behind the Bradley, with Wright’s innovative design mimicking the hues and horizontal lines of the Midwest’s tallgrass prairie, came from an industry responsible for ripping the prairie apart. B. Harley Bradley’s grandfather manufactured plows and other farm implements, passing his fortune to his descendants. But it was B. Harley Bradley’s wealthy wife, Anna, who inherited the site for the house. She and her brother, Warren Hickox Jr., persuaded Wright to build two adjoining houses. The privately owned Hickox House still stands next to the Bradley on an acre of land along the Kankakee River about 60 miles south of Chicago. Both are in the Riverview Historic District listed on the National Register of Historic Places.

The Bradley House had a series of owners who experienced great success and heartbreaking tragedy. For three decades it operated as the white-tablecloth Yesteryear Inn drawing diners from as far away as St. Louis. Another wealthy owner fueled a personal passion by using the Bradleys’ stable to build and sell birdhouses.

But two deaths mar these bright spots in the house’s history. Bradley fell on hard times financially and committed suicide in a Chicago hotel in 1914. In 1987, owner Stephen Small, whose family ran a multistate media company, was murdered in a botched kidnapping. His captors buried him in a box while they awaited ransom but had not provided sufficient ventilation. Small suffocated.

In 2005, new owners began restoring the house, and in 2010 Wright in Kankakee acquired it and opened it for tours and events.

The house is massive: 6,000 square feet on two floors, plus a basement and a two-story, 3,000-square-foot stable. The plaster and dark wood exterior with a low, flared gable roof looks like a prairie style take on an English half-timbered home. Wings flank the central living room.

The Bradley House was the first in which Wright had total control over the interior, including carpets and furnishings. He designed 90 art glass windows, some weighing 550 pounds, in geometric patterns inspired by natural plant forms. “Frank didn’t build buildings; he created sculptures,” said Bohlmann.

About 35% of the house is original, the remainder painstakingly reconstructed. Workers bored holes in the walls to find Wright’s original gold paint and sent samples to Sherwin-Williams Co. to replicate.

Tours begin and end at the former stables, now a gift shop.

Mansion for a governor

By the time Wright designed the Allen House in Wichita, automobiles had come into vogue. Instead of a stable, he created a two-car attached garage and made it fireproof because early vehicles had a tendency to go up in flames. And, yes, the garage is now a gift shop.

Newspaper owner Henry J. Allen and his wife, Elsie, hired Wright to build their home in the tony College Hill neighborhood of oil and cattle barons. Designed in 1915, it was Wright’s last true prairie-style residence. The Allens moved in in 1918 then left for Topeka where Allen served as governor of Kansas from 1919 to 1923. They returned and remained in the house until 1947, and it was listed on the National Register of Historic Places in 1973.

The Allen House was years ahead of its time, resembling homes built in the 1950s and 1960s, said Burt Brungardt, guide for the Allen House Foundation, which owns the home. It has about 4,012 square feet of living space plus a basement. The living and dining rooms wrap around a sunken garden with a koi pond accessed through glass doors opening onto a quarry-tile terrace. On tours, Brungardt points out Japanese influences in the design and furnishings, including Japanese screens and light fixtures. Wright was working on the Imperial Hotel in Japan at the time, traveling between Wichita and Tokyo.

Much of Allen House is original, including its art glass windows and 40 pieces of furniture designed by Wright and George Mann Niedecken, with whom Wright collaborated on a dozen projects. Visitors notice Wright’s familiar dining room chairs have lower backs than those in his other houses, a change the Allens insisted upon. In the entry to the living room, Wright employed his oft-repeated compression and release tactic, dropping the ceiling to a height of just over 6 feet before opening onto an expansive space.

A ribbon of gray Carthage marble runs along the base of the exterior of the house. It transitions to brick in tan and ocher hues with horizontal mortar joints gilded in gold, as Wright had done on the Imperial Hotel. Second-floor windows in a circulation gallery overlook the terrace and a garden house. The red tile roof emphasizes the design’s horizontal lines.

The plan for Allen House and its relationship to the garden foreshadows Wright’s Usonian houses of the 1930s. Coincidentally, his first Usonian design was drawn for fellow Wichita residents Louise and Charles Hoult in 1936.

It was never built.

The benefits of playing tug-of-war with your dog

The benefits of playing tug-of-war with your dog

Frank Lloyd Wright Pappas House is sold; plans are to turn it into museum, event center

The B. Harley Bradley House in Kankakee, Illinois, was designed by Frank Lloyd Wright in 1900. Its owners, the nonprofit Wright in Kankakee, claim it is Wright’s first prairie-style residence. 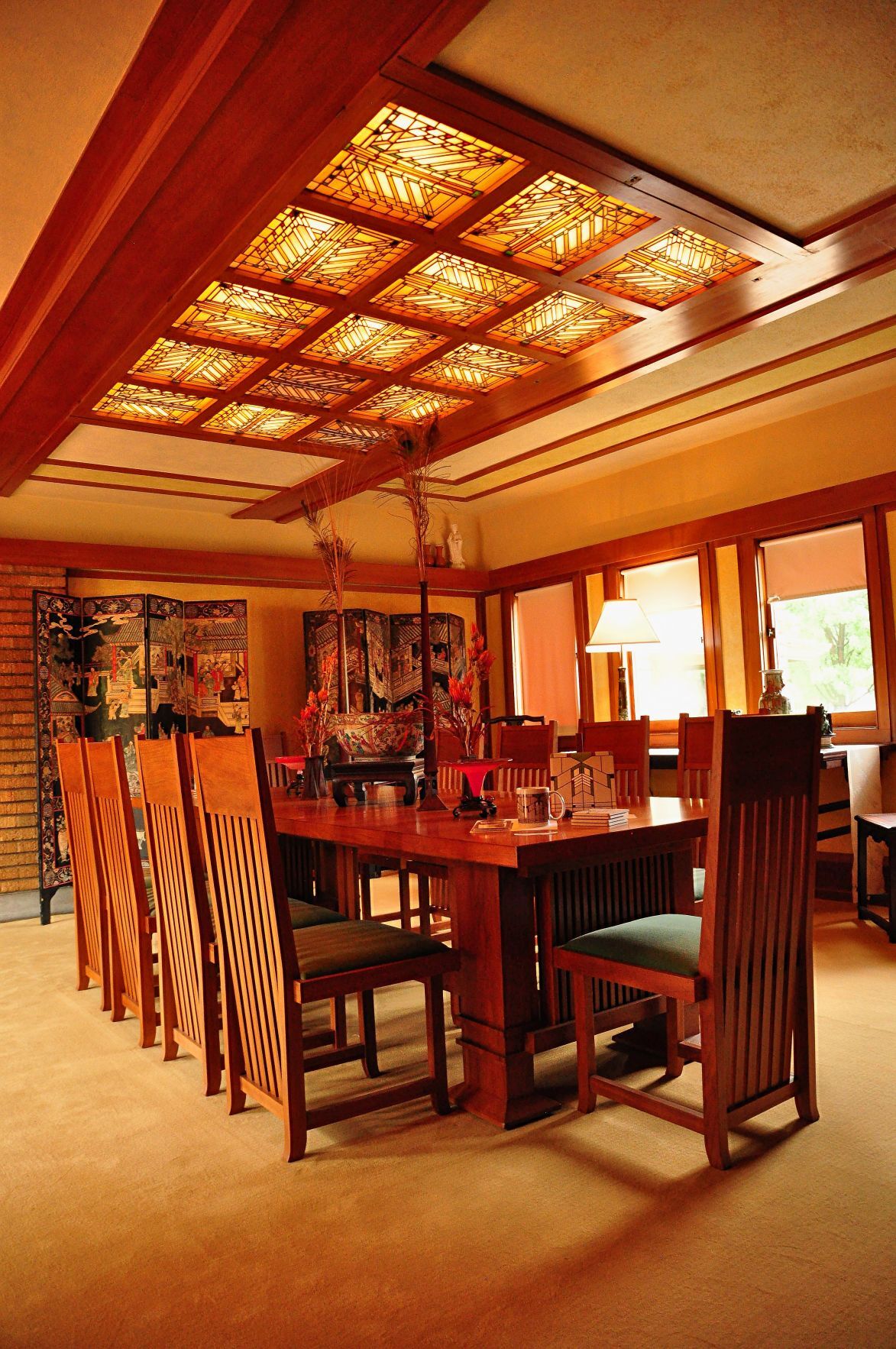 In the dining room of the Allen House, tour guides point out Wright’s art glass on the ceiling, the Japanese screen and chair backs that are lower than those in other Wright-designed residences. 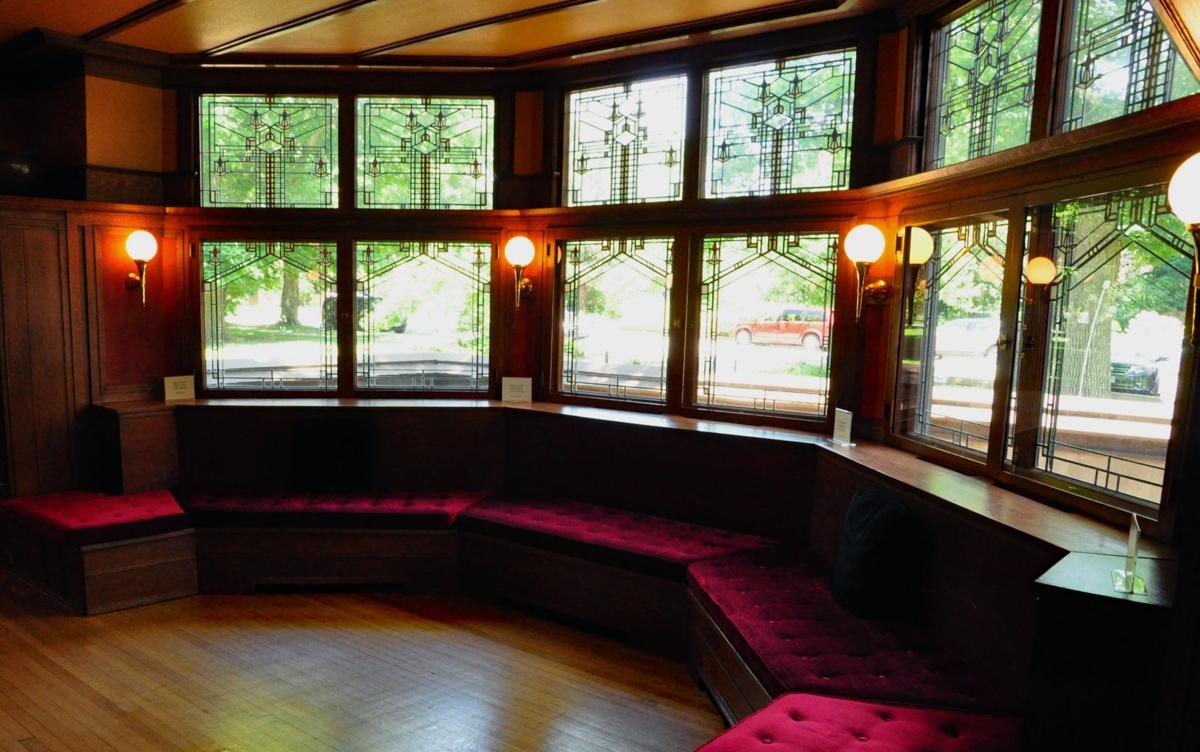 Wright designed 90 pieces of art glass in the B. Harley Bradley House, including those in a large bay window on the ground floor. 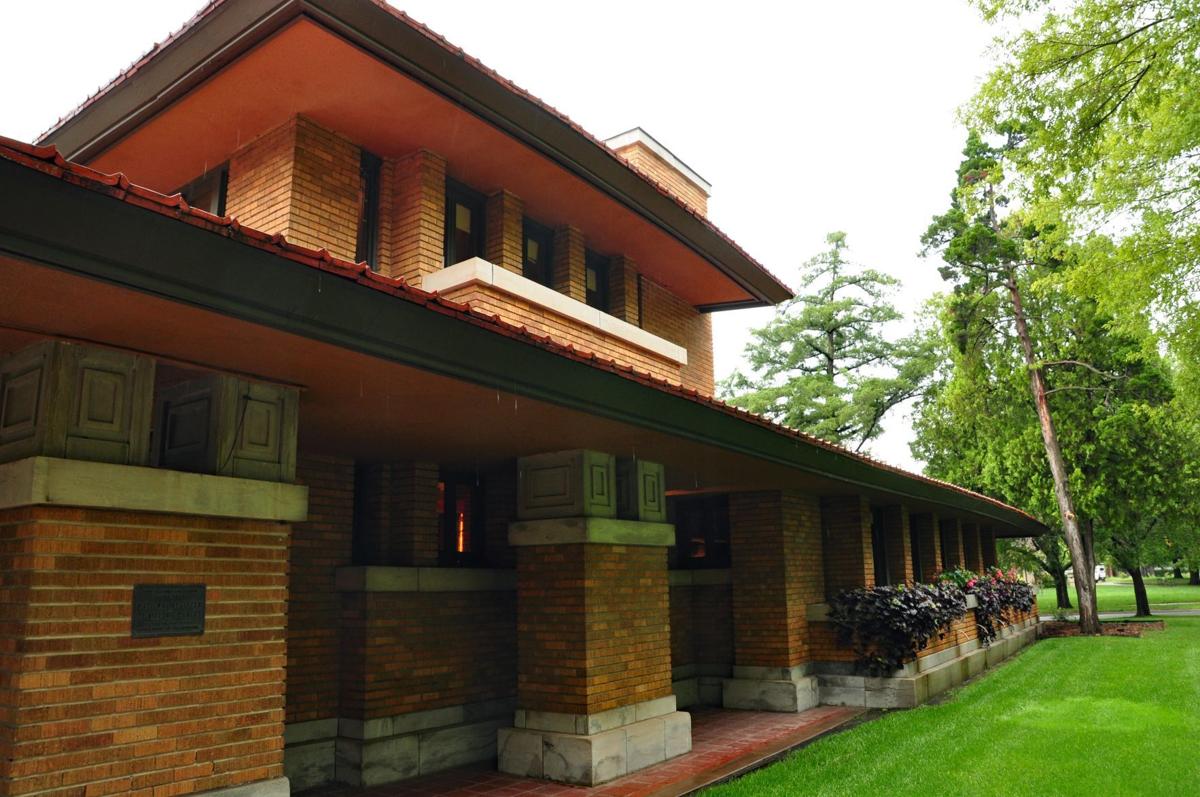 The Allen House in Wichita, Kansas, was Frank Lloyd Wright’s last prairie-style residence and shows off characteristics of the design, including horizontal lines and overhanging eaves. 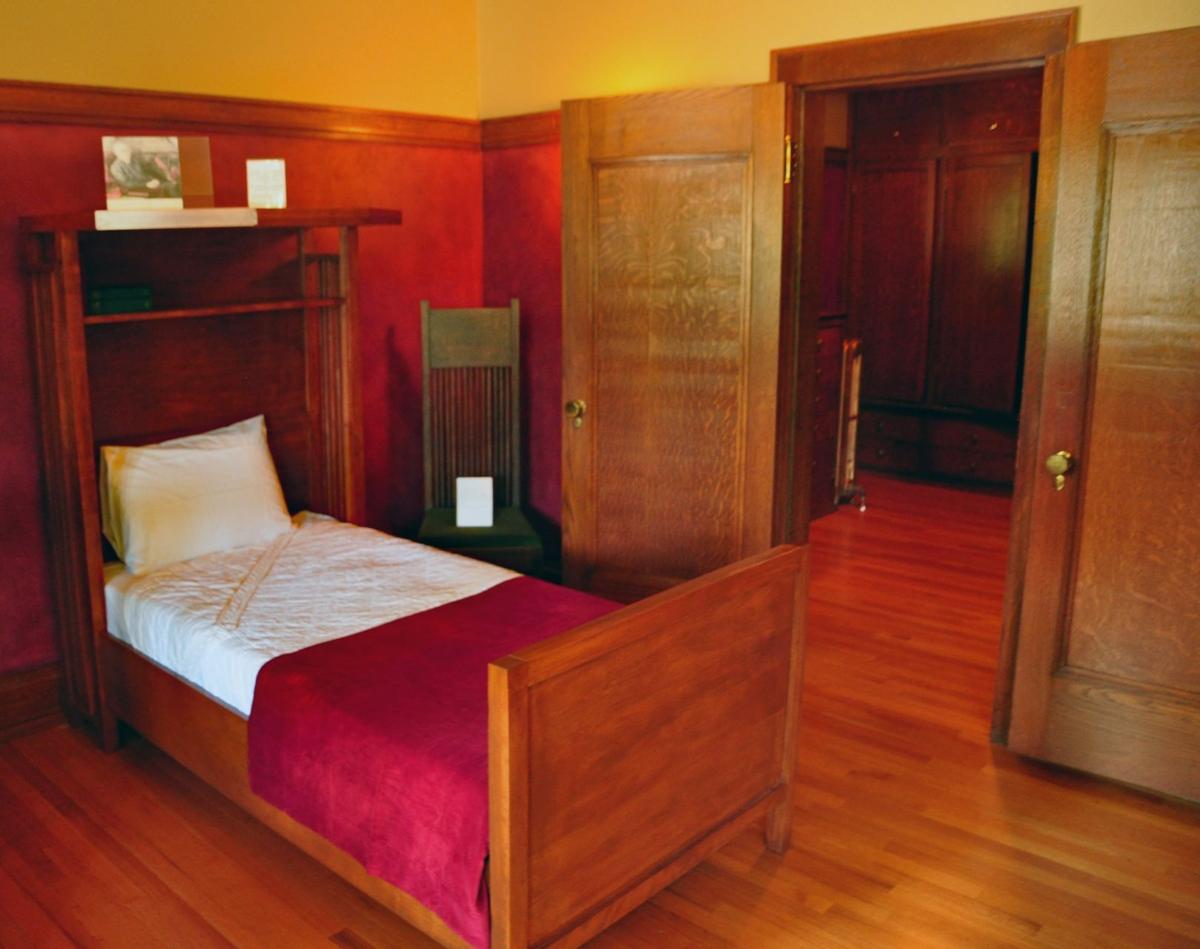 About 35% of the B. Harley Bradley House in Kankakee, Illinois, is original, the remainder restored to emphasize Wright’s penchant for polished wood, earth tones and high-back chairs. 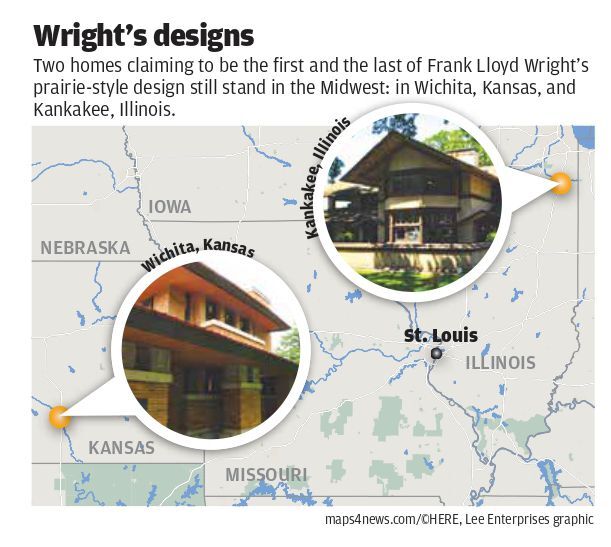