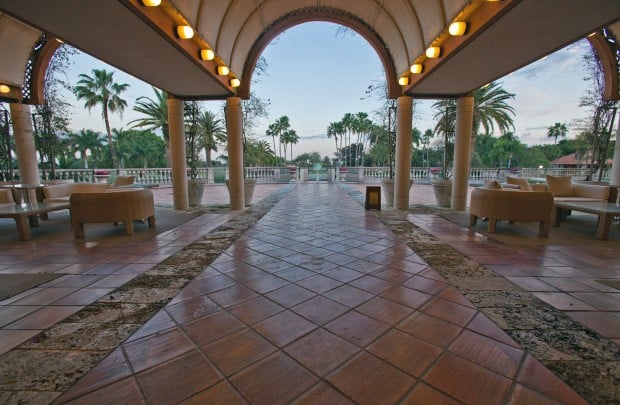 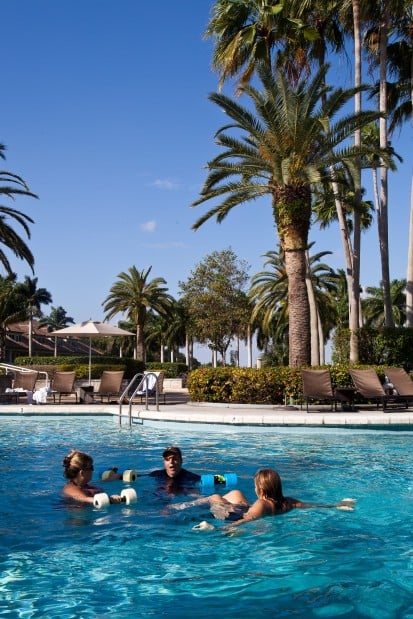 Caroline Pinkus (left) participates in an aquatics class at the outdoor pool at Pritikin Longevity Center + Spa in Miami. Photo by Brian Sirimaturos 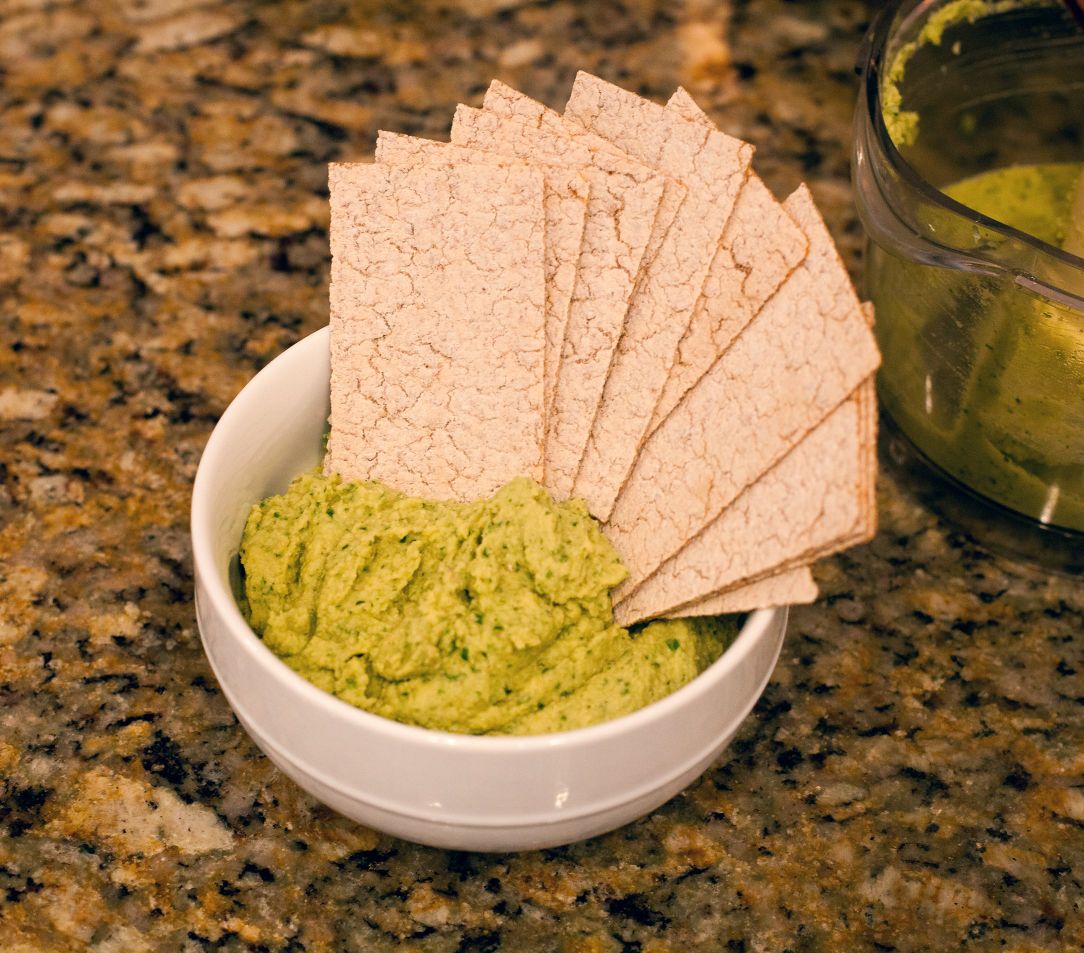 The hummus dip made during cooking school. Unlike other hummus dips, it is made without oil or salt. Photo by Brian Sirimaturos 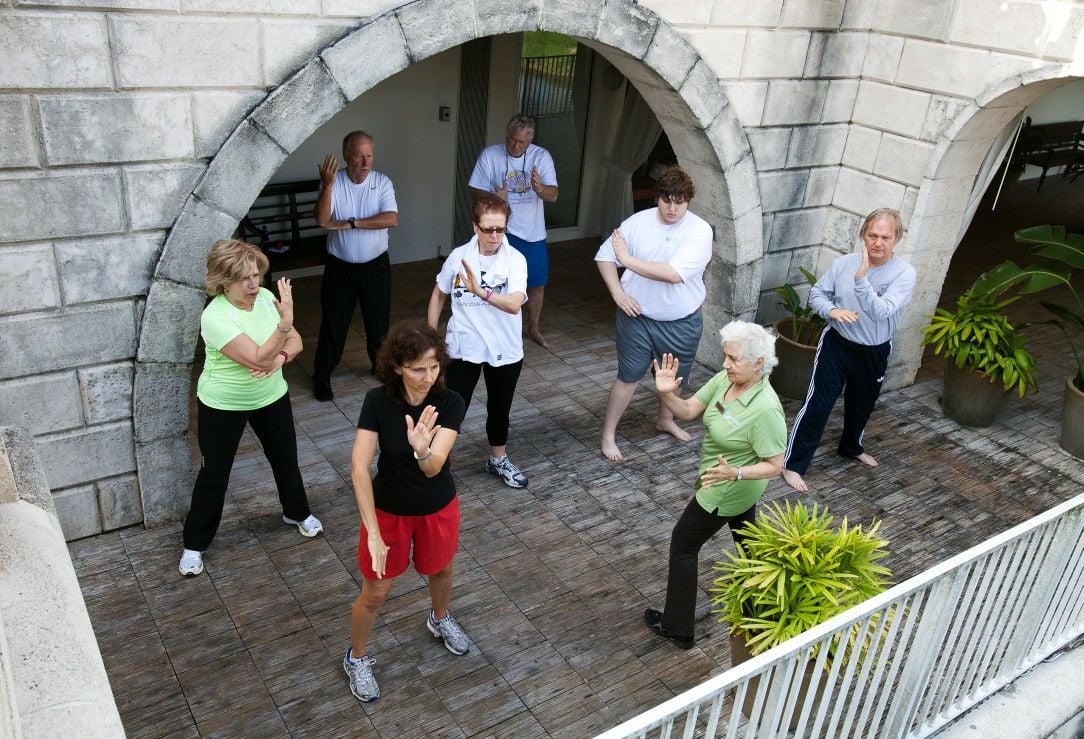 A group participates in an outdoor tai chi lesson at Pritikin Longevity Center + Spa. Tai chi, Zumba, yoga and aquatics are all classes participants can elect to take. Photo by Brian Sirimaturos 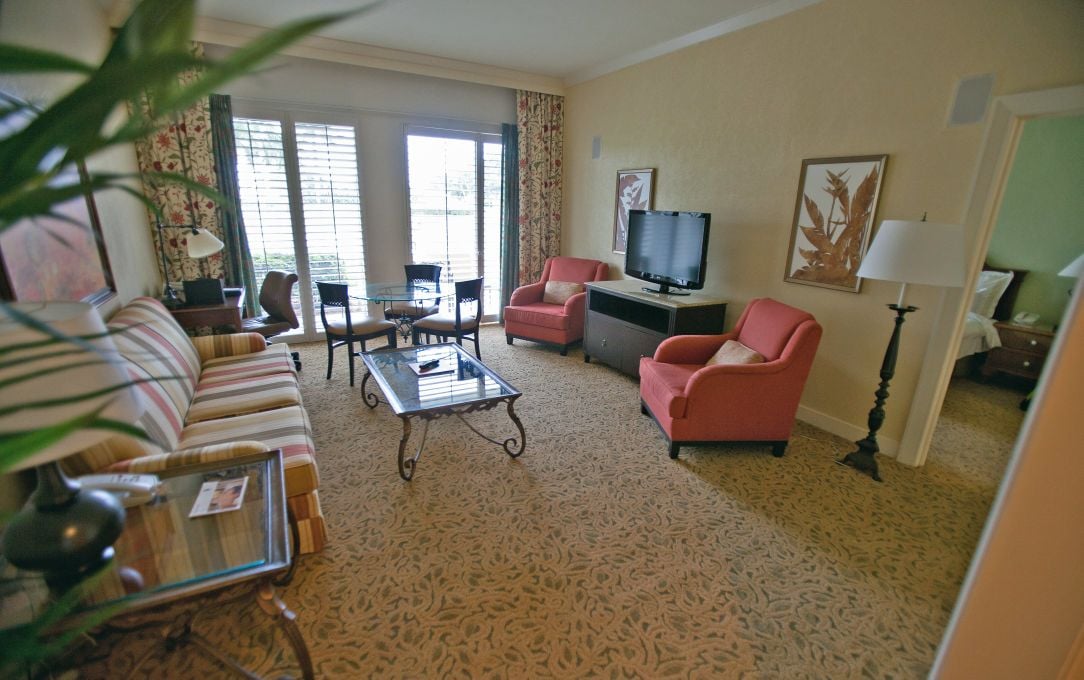 The rooms at the Marriott-owned spa at Pritikin include large suites such as this one. Photo by Brian Sirimaturos 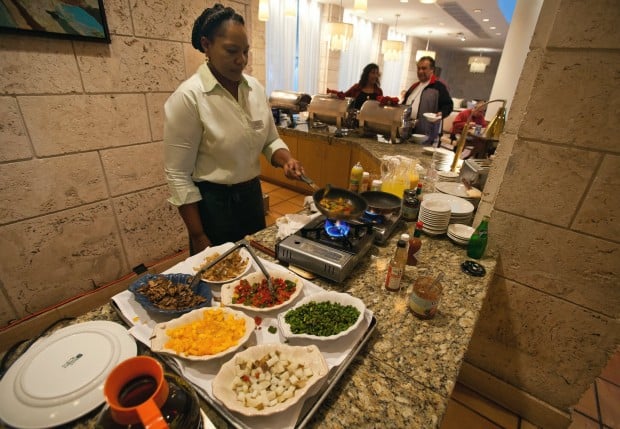 Breakfasts at Pritikin include an omelet bar, with omelets made from egg substitute or egg whites. Photo by Brian Sirimaturos 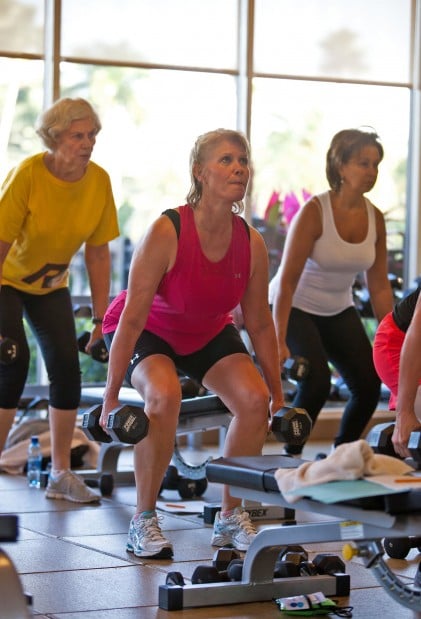 Participants in the Pritikin program perform squats during a group weight-lifting class. Photo by Brian Sirimaturos

MIAMI • There I was, scooting awkwardly across the floor of the warmed pool, lifting my water weights high in the air, palm trees swaying in the background, when a woman next to me leaned in and whispered, "This place is a miracle. It's changed my life."

Caroline Pinkus, 53, of London, wasn't kidding. Nearing the end of her monthlong stay at the Pritikin Longevity Center + Spa, she was losing weight and feeling better, and more importantly had gone from taking five blood pressure pills a day to half a pill.

"I'd gone through life burying my head in the sand. I thought if I dressed nice and fixed my hair and my nails, I still looked good, but I was carrying this weight and I wasn't healthy," she said. "This place has reformed me."

Pritikin has been changing lives for nearly 40 years. In the 1970s, Nathan Pritikin was among the first to assert that diet and exercise, not drugs and surgery, should be the first line of defense against cardiovascular disease. He brought that philosophy to the first Pritikin Longevity Center, which opened in 1975 in California.

Today, the Pritikin Longevity Center + Spa calls Miami home. About two years ago, it moved into the spa portion of the Doral Golf Resort. The resort itself includes a large spa, suites, meeting rooms, several pools, a fitness center, dining and golf.

Today, Pritikin is owned by Sam Fox, a former St. Louis Citizen of the Year. Bob Franceschelli, who also lives in St. Louis, is the president of Pritikin (he commutes).

WHY A HEALTH VACATION?

For most of us, part of enjoying a new city or country involves sampling local fare. Often, we sample lots of it. But what if you actually lost weight on vacation? Pinkus did. In my three-day stay at Pritikin I lost three pounds, and my husband lost five (yes, much of it was water weight, but I didn't feel bloated and disgusting on the airplane home as I normally do after a vacation).

Most of the people I talked with at Pritikin were on a return trip or an extended stay, and many said the reason for their trip was to become more healthy. Some were taking a week out of their busy schedules running companies; others brought their retired parents, hoping that the experience would inspire them to live healthier.

The environment, made safe by doctors, trainers, nutritionists and spa workers around every corner, is what draws many of them.

"I feel safe, and not scared to do new things," Pinkus told me.

Other health vacations might have the spa, the food and the exercise, but Pritikin prides itself on the educational component. "We give you the tools you need to be successful after you've left here," says Hubert Wewer, the general manager.

Indeed, the Pritikin program involves at least four one-hour classes a day, teaching everything from label reading to cooking to dealing with stress. Dietitians take you grocery shopping and even escort you to a Japanese steakhouse, so you know how to order.

The Pritikin philosophy is built on three components: eating right, exercise and a healthy mind-body connection.

The eating right is often the hardest part, but it's a simple philosophy. You eat healthful, satisfying foods such as vegetables, fruits, whole grains, beans, legumes, nonfat dairy, soy and small portions of lean animal protein. You eliminate high-calorie foods that don't fill you up (such as oils and fatty cheeses). It's a matter of what's called calorie density, how dense a food is with calories in relation to its weight. For example, if you eat two pounds of something healthful such as tomatoes, you only take in about 160 calories. If you eat two pounds of candy bars, you will have taken in at least 4,000 calories. Those 160 calories of tomatoes would make you feel much more full than 160 calories of a candy bar.

"Most diet and exercise programs fail because they ignore biological issues like hunger," said Jay Kenney, nutritional research specialist and educator. "This isn't rocket science. It's nothing new. It's common sense. And it makes a lot of sense."

The classes, in both the classroom and the cooking school, help you make sense of the program. But perhaps the biggest education comes in the dining room, where Pritikin serves three meals and two snacks a day.

You don't get much meat; beans provide protein. You don't drink your calories, which, at the resort means no alcohol and no caffeinated beverages. The diet features very little salt, which takes some getting used to, but by the second day, I wasn't missing it.

Breakfast and lunch are buffets. Dinner is a sit-down meal, and you can order as much (or as little) as you want off either of two menus, one hard-core and the other with options to help you ease into the Pritikin plan. Some of my meals were more successful than others. The crab cake made of a soy product was a miss; the scallops in a citrus sauce and the vegetable pasta were delicious.

Exercise is another large component of the program, and there's lots to choose from. When you arrive, you'll be given a stress test to assess your fitness level. You'll be put into color-coded groups, and your workouts will be based on your heart rate.

It's important to note that most of the other guests I saw at Pritikin were probably over age 60; some in fabulous shape, some in not-so-fabulous shape. Trainers and heath professionals are there to monitor you and make sure you don't overdo it. Trainers are also there to make to your workouts harder. My trainer, Brandicus Coleman, would even come by and crank up my machine for me. How sweet.

My day started at 7:30 a.m. with a 45-minute cardio workout. I chose a treadmill, but you could do elliptical or bike. One day, we'd get in our heart rate training zone, the next we'd do interval training. Next, was a 45-minute weight training or toning class, followed by an optional class. I tried yoga and aquatics; Zumba and tai chi are also available.

More than 100 studies in top medical journals have documented the results achieved by guests at Pritikin. Here are highlights:

• More than 70 percent of diabetics on medication left drug-free after a three-week stay (Diabetes Care).

• Nearly 60 percent of people with hypertension normalized blood pressure and left drug-free after a three-week stay (Journal of Applied Physiology).

Much of this success is achieved through individualized medical attention. On my second day there, I had a nearly one-hour meeting with a physician. When is the last time your doctor spent an hour with you? My husband had a nearly two-hour appointment with Frank Musumeci, biomechanical and musculoskeletal director.

OTHER THINGS TO DO THERE

Pritikin shares space with the Spa at Doral, which means Pritikin guests have unlimited access to the sauna, rainshower and hot and cold baths of the spa. It also means you are just a short walk from a relaxing massage or a more intense facial treatment.

Pritikin guests stay in either the luxurious suites adjacent to the main spa building or in nearby rooms that are part of the larger Marriott complex.

If you are only staying for one week, you won't have a lot of downtime. In fact, I had to skip a lecture just to catch some rays at the pool (hey, I was in Miami in January!). But for those staying longer (Franceschelli said the average stay is just under two weeks) you could find time for golf, sunbathing, shopping and more.

How much • Average price per week for one is about $4,500, which is all-inclusive (for two people it starts at $6,500). That includes medical and fitness consultations, meals, hotel accommodations and classes. Medical services are often covered under private insurance plans. And for guests who are Medicare beneficiaries, about half of the cost of a two-week stay is Medicare-reimbursable if the guest qualifies for a new Medicare category called intensive cardiac rehabilitation.

Rail travel show is this weekend

Every Thursday I write about a place I’d love to go. This week, the Red Mountain Resort in Utah.

Caroline Pinkus (left) participates in an aquatics class at the outdoor pool at Pritikin Longevity Center + Spa in Miami. Photo by Brian Sirimaturos

The hummus dip made during cooking school. Unlike other hummus dips, it is made without oil or salt. Photo by Brian Sirimaturos

A group participates in an outdoor tai chi lesson at Pritikin Longevity Center + Spa. Tai chi, Zumba, yoga and aquatics are all classes participants can elect to take. Photo by Brian Sirimaturos

The rooms at the Marriott-owned spa at Pritikin include large suites such as this one. Photo by Brian Sirimaturos

Breakfasts at Pritikin include an omelet bar, with omelets made from egg substitute or egg whites. Photo by Brian Sirimaturos

Participants in the Pritikin program perform squats during a group weight-lifting class. Photo by Brian Sirimaturos