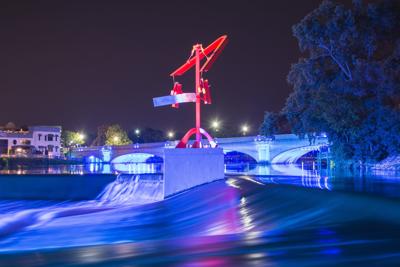 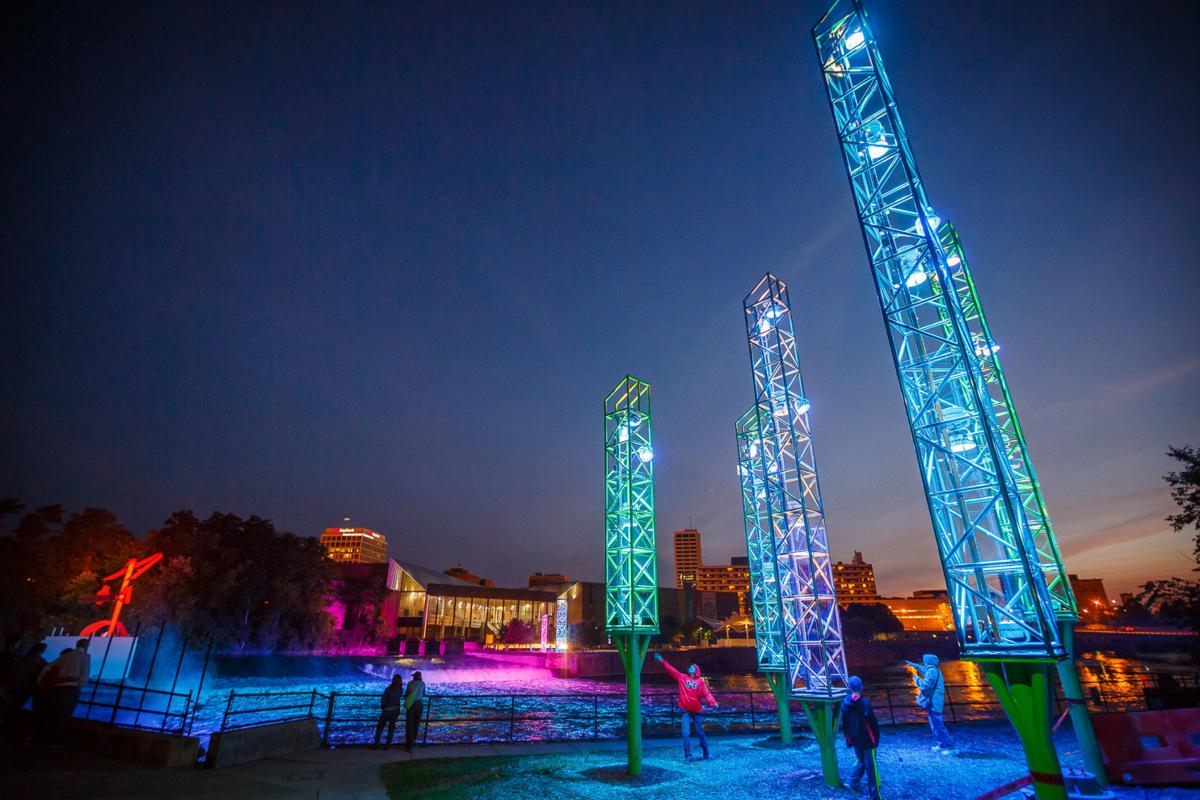 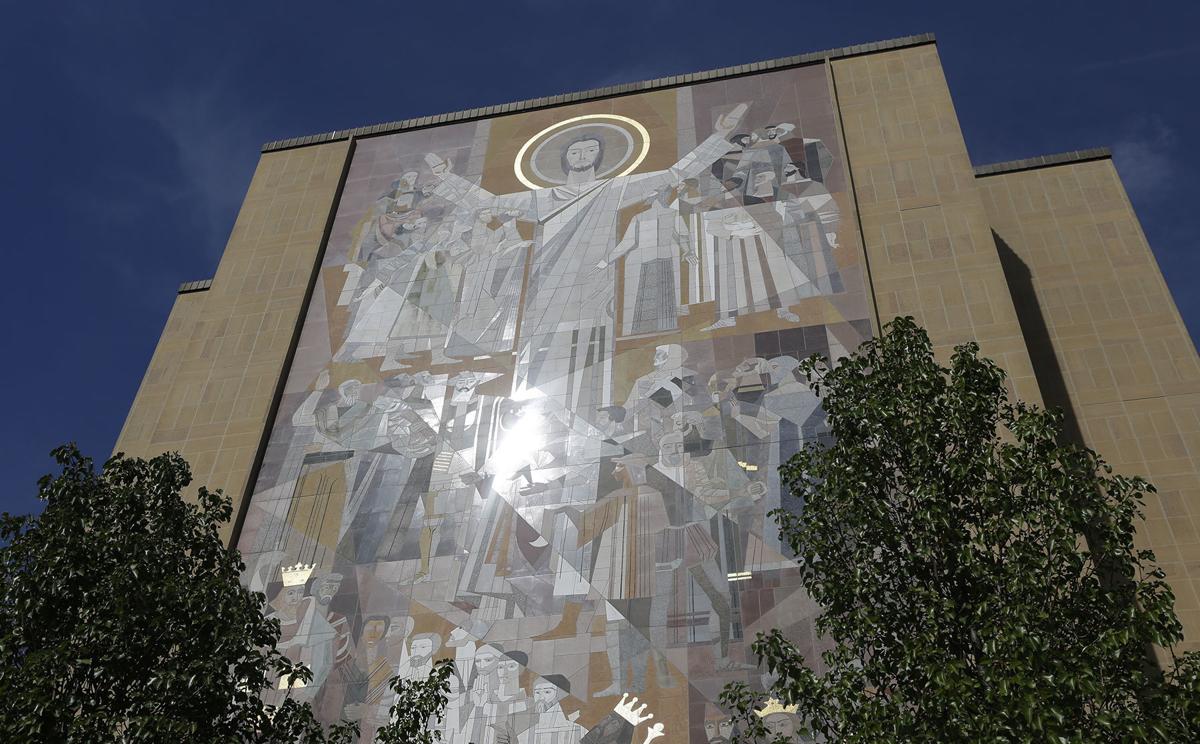 A mosaic-mural titled "Word of Life" on the facade of the Hesburgh Library on the Notre Dame campus is also know as "Touchdown Jesus" in which he seems to be signalling six points. 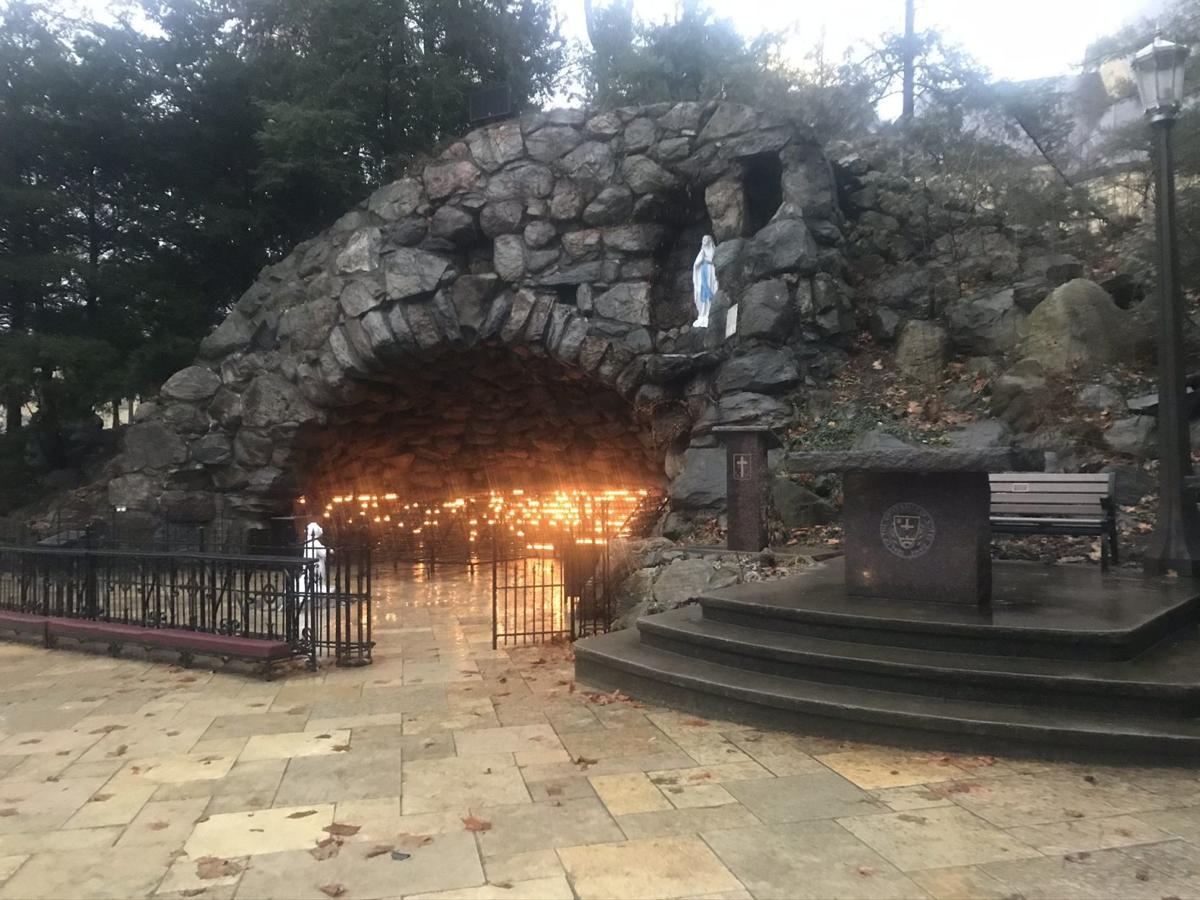 Tour the campus of Notre Dame University to see the Grotto of Our Lady of the Lourdes where you can offer a votive in prayer. 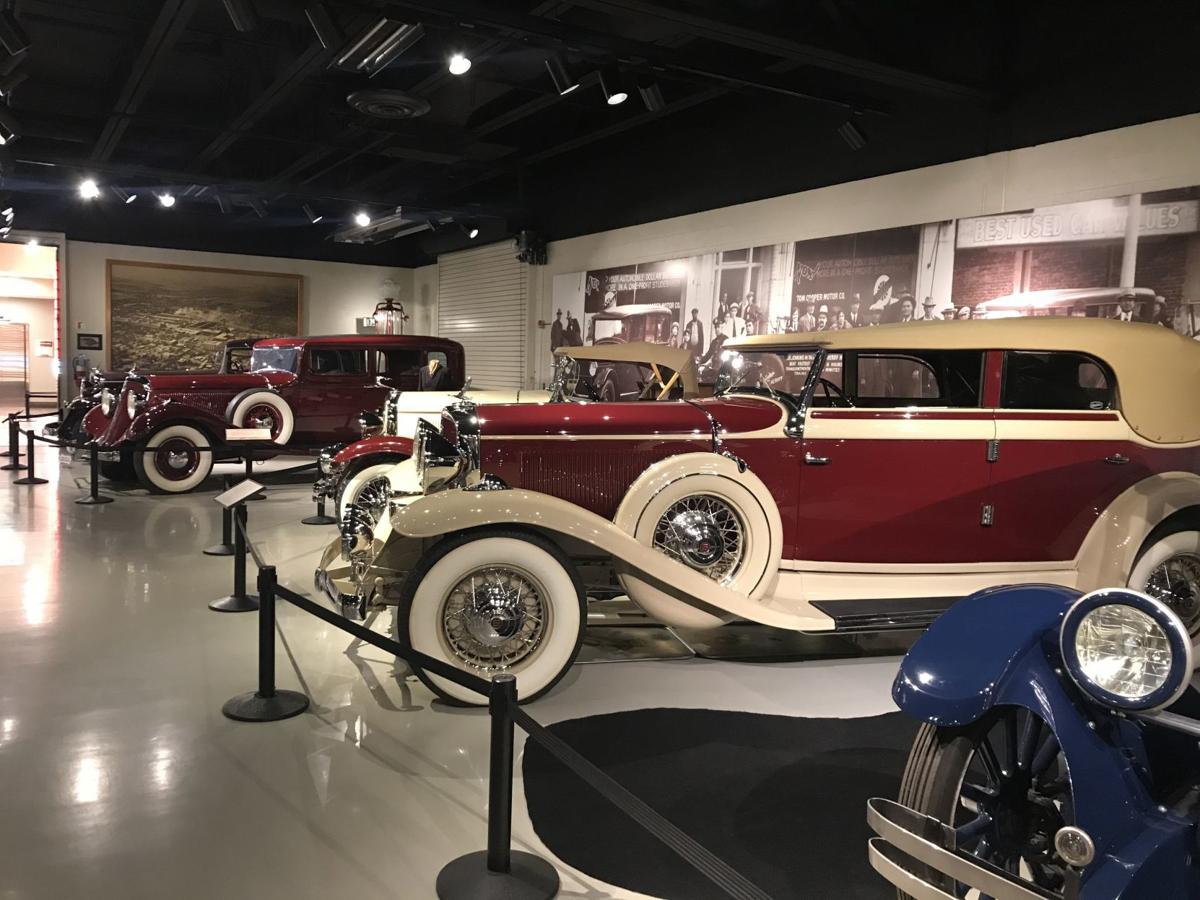 The main level of the Studebaker National Museum displays Studebaker history and vehicles from the 1800s to 1934. The upper level contains vehicles from 1934 until the last one came off the line in the 1960s. The lower level displays military vehicles and more cars stacked on lifts for more storage. 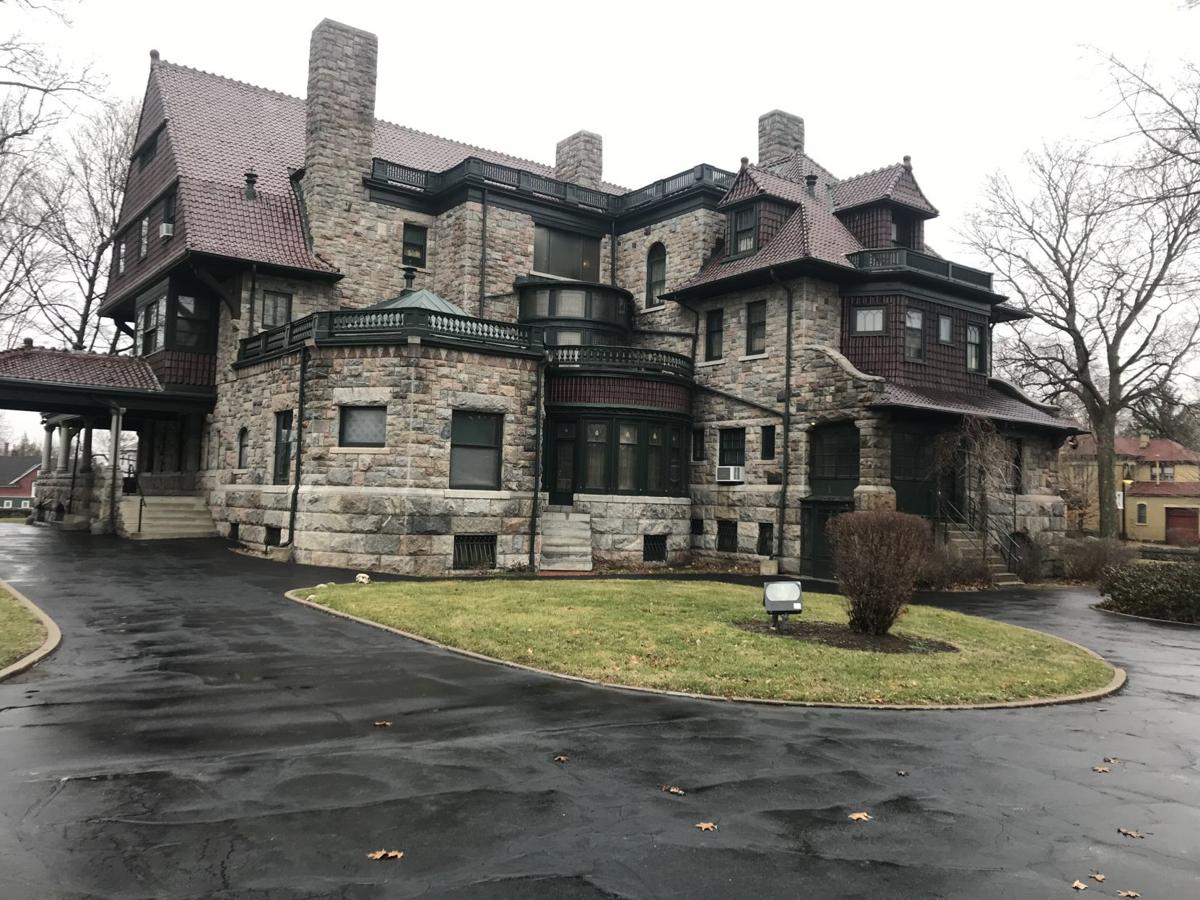 The Oliver Mansion in South Bend, Indiana, is one of the few historic house tours in the country where the house is filled with all original furnishings.

SOUTH BEND, Ind. — Maybe you are a huge Notre Dame fan. Maybe, like me, you love midsize Midwestern cities. Or maybe you want to see the town that put Mayor Pete on the presidential map. Pete Buttigieg, Democratic hopeful for president, was mayor of South Bend for eight years, ending his second term in January. He grew up there; his family still lives there. But this is not a political story — just a travel story about a city (population: 102,000) to be proud of, easy to get around, brimming with friendly people and full of diverse eateries, art and outdoor adventures. And of course, there’s the Fighting Irish.

Downtown itself is lively with restaurants, shops, music venues and bars. But it’s the St. Joseph River and its colorful light show that turns downtown into an interactive work of art.

Though it’s a little hard to take it all in right now, with construction that’s expected to last until summer 2021, two interactive sculptures work with lights under a bridge, a “Keeper of the Fire” sculpture and cascading waters to bring the riverfront to life. Sensors built into light pillars along the river prompt the lights to change color or alter their pattern as a result of people moving nearby. Visitors can send a flow of colored lights across the river, and people on the other side can send a flow of color back. The light installation, by artist Rob Shakespeare, was unveiled for the city’s 150th anniversary in 2015.

Just across that bridge, where arches underneath glow purple, blue, red and green, a newly redesigned city park awaits. Howard Park’s centerpiece is a 16,000-square-foot ice trail with rolling hills and curves along with a more traditional pond-like skating area. The trail circles and crosses over a new playground. Fire pits sit alongside the trail, and concessions serve hot chocolate and snacks. In summer, the walls of the trail will be removed for open access to the playground. The park will also have fountains, to play in by day and with a light show at night, and a festival lawn. ($7-$10 to skate; visithowardpark.com)

And I may have to come back to South Bend in the summer to check out the East Race Waterway, a man-made whitewater rafting course in the middle of downtown. Since 1984, the historic waterway, once used to provide electricity, has been churning out Class 2 rapids for thrill-seekers. Each ride is $6 and includes all equipment (kayakers can bring their own). Choose a raft for two to five. (eastracewaterway.gr8.com)

The University of Notre Dame is the biggest game in town (literally, sometimes, when tens of thousands of people fill the city on football game days). But it’s a beautiful campus, and one worth visiting — for Catholics, academics, sports fans and history buffs.

Visitors can take a guided tour through the Eck Visitors Center for free or tour on their own. But be warned, parking is not easy to find, especially when school is in session.

The biggest must-see is probably a game. Hockey and football are the most popular ones.

But take the time to see a few other sites. The Grotto of Our Lady of the Lourdes sits across from a beautiful lake. It is a scale version of the Grotto of Massabielle, in Lourdes, France, where St. Bernadette is said to have seen the Virgin Mary in 1858. The cave sits back and is filled with votive candles. People come to pray, give thanks and offer blessings.

The famous Golden Dome of the Main Building can be seen from all over campus. The building is mainly used for administration, but tours will take you through the 1879 structure where a 19-foot-tall, 4,000-pound statue of Mary sits atop it.

The Basilica of the Sacred Heart is a stunning, Gothic-inspired church where Mass is celebrated regularly. The stained-glass windows were first installed in 1873, giving Notre Dame the largest collection of 19th-century French stained glass in the world.

When ESPN gets ready for “Game Day” at Notre Dame, it sets up on the lawn in front of “Touchdown Jesus,” a 14-story mural of Jesus officially called “The Word of Life.” It’s next to the stadium, so even for those who can’t snag tickets to a game or for a stadium tour ($20) of “The House That Rockne Built,” it’s worth checking out the mural. (nd.edu/visit/take-a-tour/)

Beyond the university, South Bend offers plenty of things to do to fill a long weekend.

South Bend Chocolate Factory • Part museum, part factory, part store, this stop in South Bend is fun for everyone. I learned at the adorable downtown Chocolate Cafe that its products’ maker, the South Bend Chocolate Factory, offered tours. Visitors who take the tour learn about the history, the process and, of course, get a treat at the end. The Chocolate Museum there houses hundreds, maybe thousands, of collectibles, including a 1,300-year-old Mayan chocolate pot. You don’t need to make an appointment or buy tickets ahead of time; tours are pretty much at the top of every hour. ($5; sbchocolate.com)

Studebaker National Museum • Studebaker was founded in 1852 as the Studebaker Brothers Manufacturing Corp. in South Bend. Back then, it produced carriages and buggies. But as technology advanced, the company did too, developing into one of the biggest automobile manufacturers in the U.S. The South Bend plant ceased production in 1963, and the last Studebaker was produced in 1966. At the museum, you can see dozens of vehicles, from the Barouche that President Abraham Lincoln used the night of his assassination to a shiny red convertible you can sit in. ($10; studebakermuseum.org)

The History Museum and Oliver Mansion • In the same building as the Studebaker museum is this ode to the town’s history. If you want to learn about this part of Indiana, from prehistoric times to the Potawatomi tribes to the Civil War to the civil rights movement, this is the place to do it. There’s even a kids museum and a fascinating exhibit on the first women’s baseball leagues (which inspired “A League of Their Own”). But for me, the big draw was the stunning Oliver Mansion, located on the property — or more precisely, the museum is located on its property. All of the furnishings in the 1895 Romanesque Queen Anne home are original to the house, at least as it was in the 1930s. The 38-room, 12,000-square-foot mansion is full of spectacular fireplaces, handcrafted woodwork and gorgeous works of art. The house was built by Anna and J.D. Oliver, who made his fortune on field plow design patents. It was donated to the History Museum by their descendants, who wanted to preserve the legacy of their family. Tours are offered daily. ($10 or $15 for history museum, Oliver Mansion and Studebaker museum; historymuseumsb.org)

South Bend Museum of Art • Along the St. Joseph River downtown sits this well-done art museum featuring works of mostly regional artists and focusing on the contemporary. Be sure to check out the works of the Chicago Imagists, including Ed Paschke, Gladys Nilsson and Ray Yoshida. (Admission is a suggested $5, and parking is $5 in the nearby Century Center lot; southbendart.org)

South Bend also has a zoo and the Potawatomi Conservatories and botanical gardens, in addition to a number of parks to explore.

Cafe Navarre • With a fashionable bar in a historic building on a corner in downtown, the ambiance alone is enough to dine here. But the food, a menu of classics including beef medallions ($37) and more adventurous options such as octopus with chimichurri ($15, appetizer), is just as amazing. The bar menu is even more adventurous. I’m still trying to perfect the Winter Mojito, a mix of rum, coconut milk, lime-mint simple syrup and pomegranate seeds. (cafenavarre.co)

Evil Czech • In the next-door town of Mishawaka, the Evil Czech is a brewery with upscale bar food. Try the Buffalo cheese curds ($9.95) and hope to get a sassy waitress. (evilczech.com)

King Gyros on Edison Road • It’s a bit of a dive, but King Gyro is clearly popular, as evidenced by the line on our visit there. The menu was extensive, the service was fast and the lamb ($8) was amazing.

Brothers Bar & Grill • Situated in Eddy Commons, a brick-lined shopping area across the street from Notre Dame, Brothers (actually part of a chain) has upscale bar food, fun drinks, a billiards table and plenty of TVs for watching the game if you didn’t snag tickets. (brothersbar.com/southbend)

Fiddler’s Hearth • In the land of the Fighting Irish, it seems fitting to dine at a locally owned Irish pub. In downtown South Bend, find a darkly furnished bar with a cozy fireplace, a variety of Irish and local beers and all the Irish favorites, but just get the fish and chips, served wrapped in a newspaper and fried to absolute perfection ($13 for two pieces). (fiddlershearth.com)

A mosaic-mural titled "Word of Life" on the facade of the Hesburgh Library on the Notre Dame campus is also know as "Touchdown Jesus" in which he seems to be signalling six points. 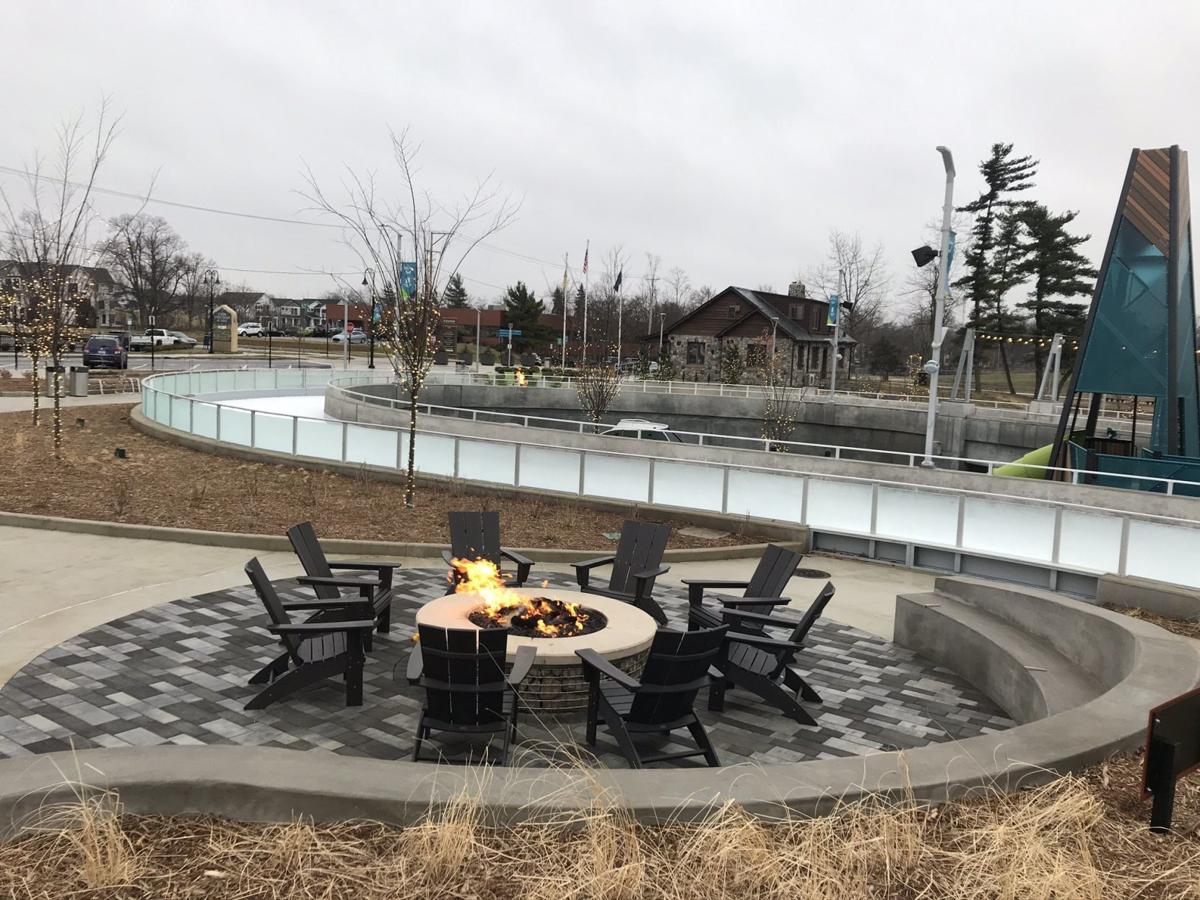 At Howard Park in South Bend, an ice track makes its way around a playground as fire pits are set up along the outside of it.

Tour the campus of Notre Dame University to see the Grotto of Our Lady of the Lourdes where you can offer a votive in prayer. 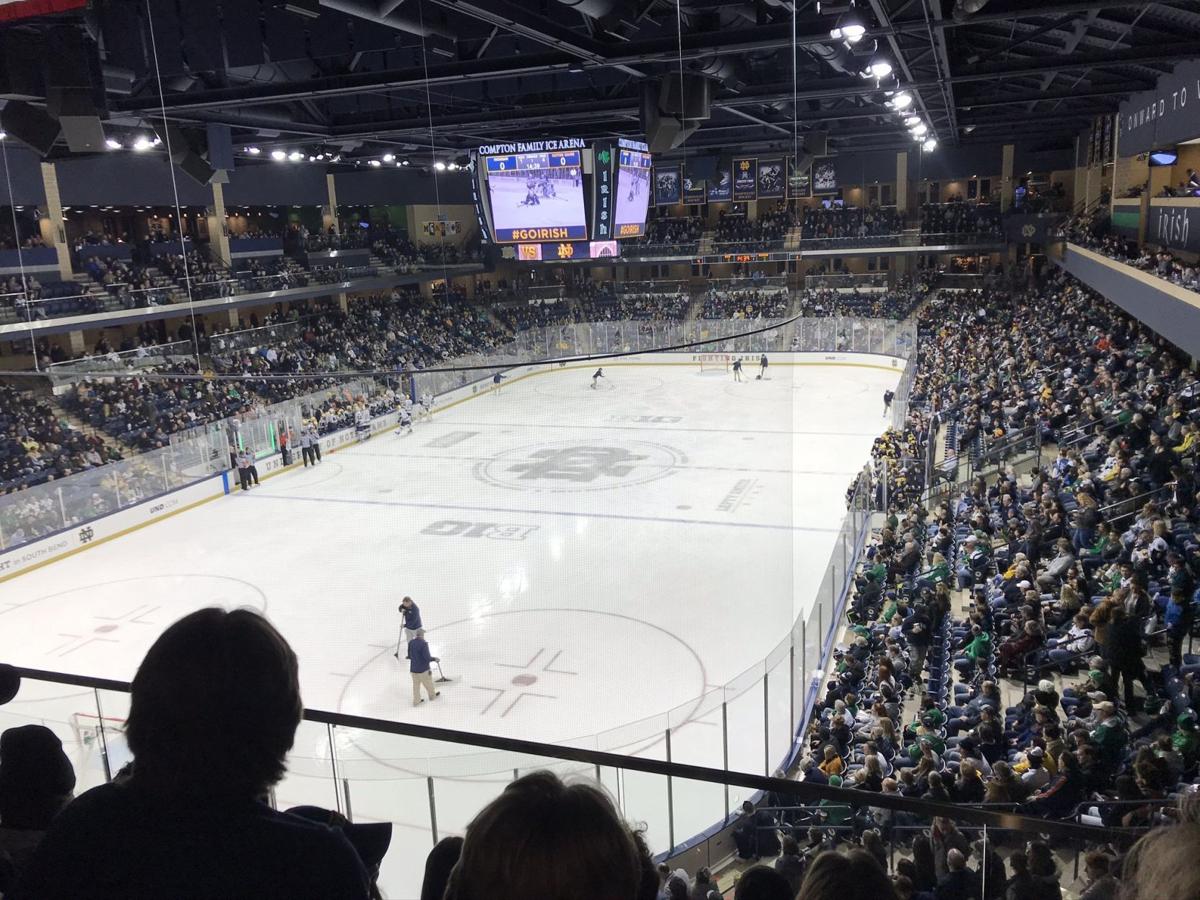 Catch a game at the Compton Family Ice Arena while in South Bend. You can get tickets for as little as $10. 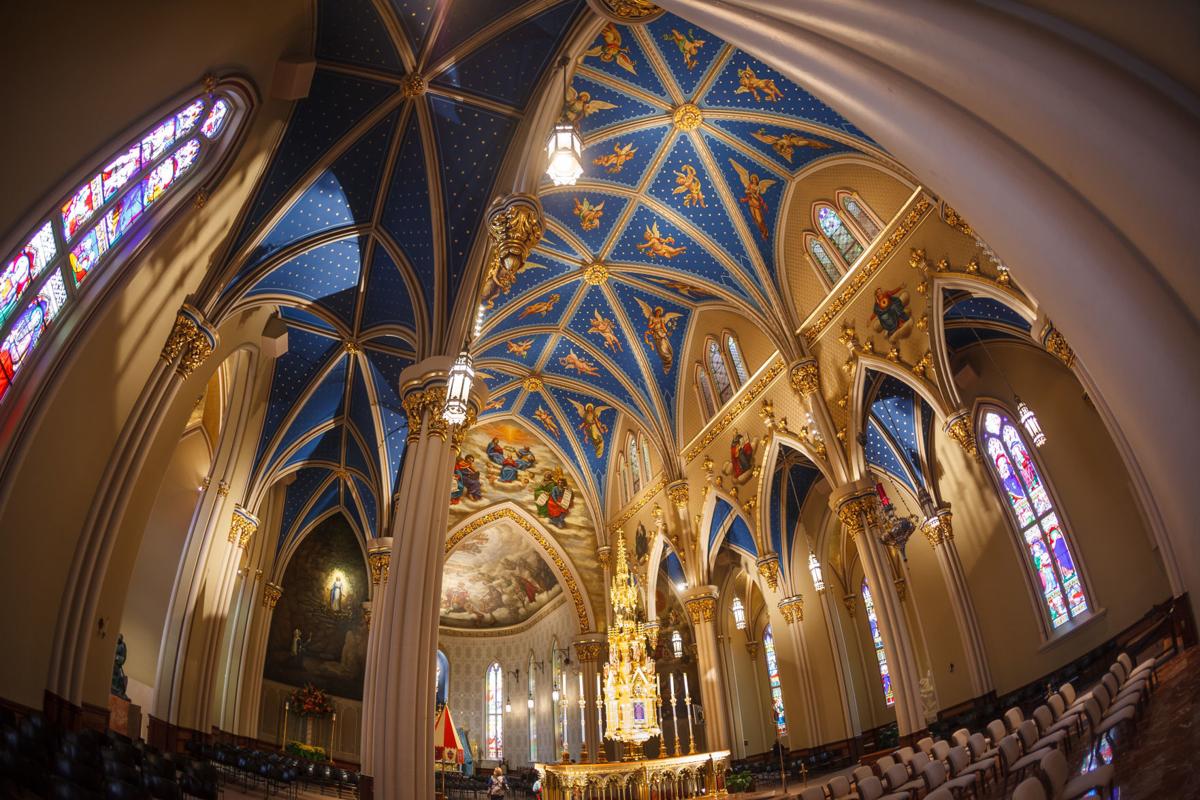 The Basilica of the Sacred Heart at Notre Dame University.

The main level of the Studebaker National Museum displays Studebaker history and vehicles from the 1800s to 1934. The upper level contains vehicles from 1934 until the last one came off the line in the 1960s. The lower level displays military vehicles and more cars stacked on lifts for more storage.

The Oliver Mansion in South Bend, Indiana, is one of the few historic house tours in the country where the house is filled with all original furnishings.