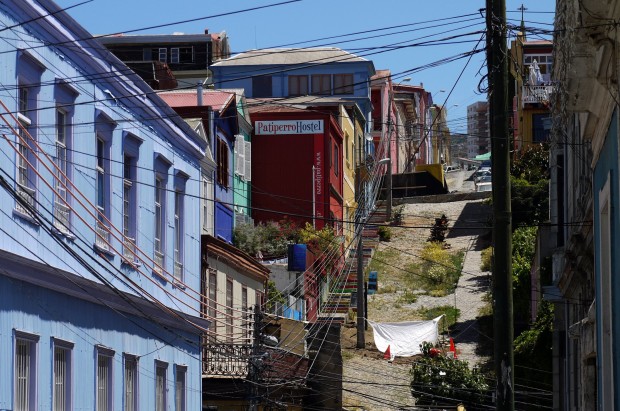 Comfortable walking shoes are a must in Valparaiso, which is built almost perpendicular to the Pacific Ocean. Photo by Bill Keaggy 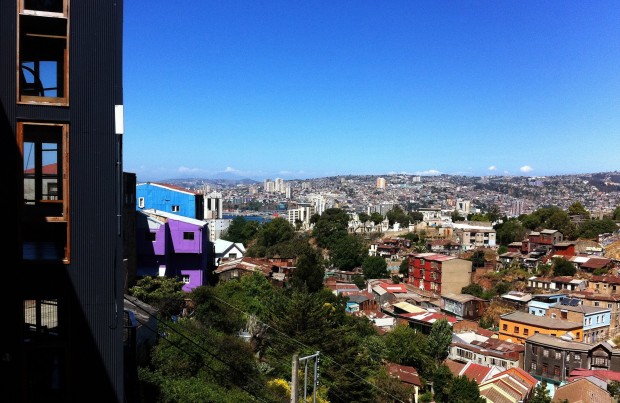 The colorful homes of Valparaiso are connected by a maze of steep stairwells and cracked sidewalks. Don't listen to tourist who dismiss Valparaiso as shabby. The city is Chile's cultural heart and soul. Photo by Bill Keaggy 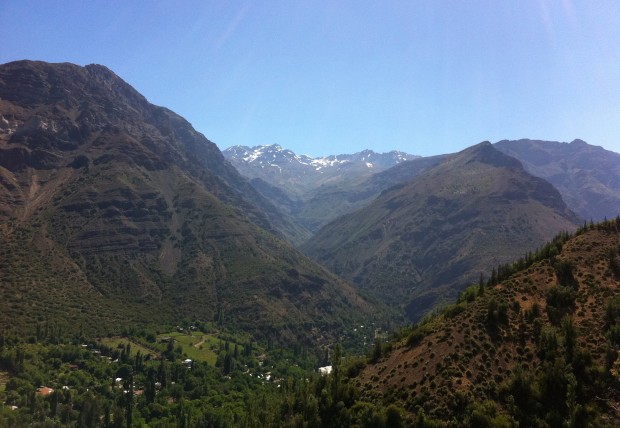 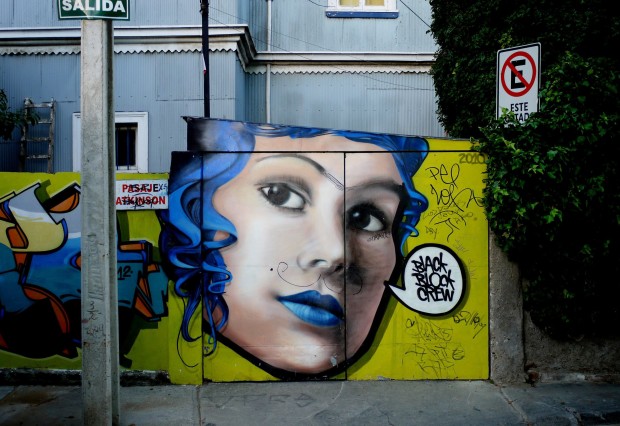 The journey really is the destination in walking town Valparaiso. Whimsical murals cover almost every wall. Photo by Bill Keaggy 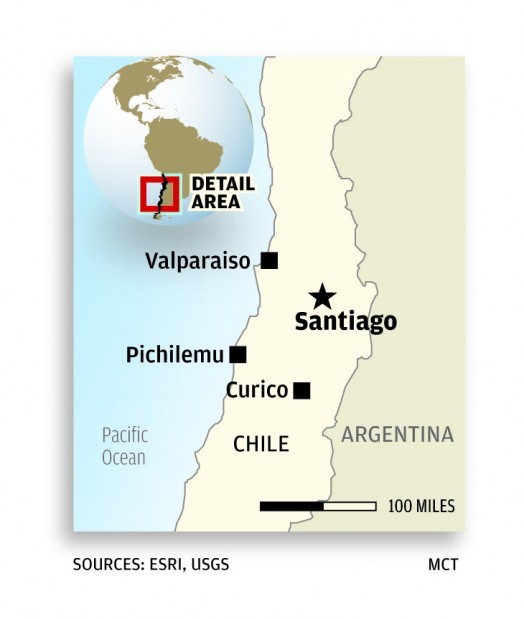 SANTIAGO, CHILE • Every time we took the right exit, successfully ordered palta or remembered to bring toilet paper to a national park, I imagined Phil Keoghan of "The Amazing Race" just around the corner.

"Diane and Bill," he would say, stonefaced. "Welcome to Chile. You are the first team to arrive."

Our prize for this leg of the race — an avocado, which is awesome, because that's exactly what we meant by "palta."

I loved many things about my two weeks in Chile — the hiking, the beach, the people, the wine, the wine, the wine. Those are the reasons I went, and Chile did not disappoint. But, honestly, I also returned pleasantly surprised with myself. I did not get lost on the Santiago subway, fall into the Class IV rapids of the Teno River or ruin my marriage, which would have been a real drag since this was our 10-year anniversary trip. The experience made me realize the best trips not only reveal the world's beauty but also test your competence. Any "Amazing Race" contestant caught haranguing a Latvian shop clerk knows what I mean.

The New York Times just named Santiago its No. 1 place to visit in 2011. But I had been planning this trip since 1990. That's when I took a class at Washington University that explored Chilean writer Pablo Neruda. I had never heard of the Nobel Prize-winning poet and revolutionary; I signed up simply because the professor, Henry Schvey, was my favorite. Soon I was entranced by Neruda's tales of the untamed sea and burning desire. A few years later, the Oscar-nominated film "Il Postino" would introduce many more to Neruda's romantic vision. By then, I was a student of all things Chilean — Chilean soccer, Chilean literature, Chilean politics.

You probably have a place like that, too. Getaways like Tuscany, Paris and Hawaii may boast a universal appeal. But each of us has a destination that calls on a personal level, usually because of something we read a long time ago.

So that's why we chose Chile. But the where and when were dictated by price and logistics. We picked early December, when Chile's wildflowers burst with color and springtime temperatures reach 85 degrees. High season kicks in January, so we also enjoyed smaller crowds and cheaper prices.

The trickier question was where to go. Friends wondered if we would see the mine where 33 workers miraculously survived 69 days underground. No, though I had heard the northern desert is stunning. And so, I was told, are the glaciers and mountains of southern Patagonia. But about 3,000 miles separate the nation's tips, and we would need way more time and money — just flying to Santiago costs $1,400 — to experience it all.

So we stuck to central Chile, making a parallelogram from inland Santiago to port city Valparaíso, down to surf capital Pichilemu then east to Curico countryside. That's not much ground, but we enjoyed almost every landscape Chile had to offer.

The sprawling capital city of Santiago is home to 5 million people. For some reason, I expected the women to wear white suits and the men to sport trim mustaches. Nope, that must be Argentina. Chileans are not fancy or pretentious. Nor do many speak English. But they are eager to help, chasing you with the change you left at subway counter or miming "clams" if you can't decipher the menu.

To orient ourselves, we took a three-hour "Local's Life" bicycle tour with La Bicicleta Verde tour company. Best decision ever. We stopped our cruiser bikes at all of the major attractions such as the Central Seafood Market, Plaza de Armas and the Fine Arts Museum, which was badly damaged by last year's 8.8 magnitude earthquake. But Chile's best art exists on the walls of the bohemian Bellavista neighborhood, and we were dazzled by the colorful murals that cover every garage, fence and building. While stopping for mote con huesillos, a popular drink of nectar, dried peach and cooked wheat, our guide Zac — a college dropout from Colorado — offered these insights about Chile:

1. Don't fear the stray dogs. They are everywhere but harmless. Neutering dogs, Zac told us, apparently is an affront to both the nation's traditional Catholic faith and Latin machismo.

2. Don't trash-talk Augusto Pinochet. The dictator killed and tortured thousands of political opponents in the 1970s and '80s, but many credit him for the nation's prosperity. Indeed, Chile's economy ranks among South America's strongest with less corruption and crime than its neighbors. Hence the nagging ambivalence.

3. The best food in Chile is actually Peruvian. The nation is almost all coastline, yet the national dish is a mealy hot dog, slathered with mayonnaise and chopped avocado. And the "coffee" — notice the quotes — is typically Nescafe. But you can drink the water.

Thrilling diversion: Only an hour away, private eco-resort Cascada de las Animas offers rafting and hiking adventures for Santiago daytrippers. Our Ecuadorian guide led us on a steep three-hour hike through the Andes where we saw distant glaciers, natural springs and penned wild boar, a staple on the resort's menu.

There are people who will tell you not to go to Valparaíso. That it's dirty. That it's falling apart. That there's that not much to do. And they would be right.

But skip Valparaíso and you miss Chile's most memorable city. Perched perpendicular to the Pacific, the city's cerros, or hills, are connected by mazes of litter-strewn stairwells, paths and funiculars, essentially hillside cable cars. With any luck, you'll get lost. Like Bellavista, Valparaíso is covered with murals. Other buildings are painted shades of red, yellow, green and violet turning rows of homes into brightly painted, if peeling, rainbows. The only major attraction we visited during our three days was Neruda's famous four-story home, La Sebastiana, and frankly, we went as much for the walk as for the artifacts.

Personal victory: Reading Neruda's love poems to my husband without him wincing.

Thrilling diversion: Charles Darwin was fascinated by the unique Chilean palm trees in nearby La Campana National Park, home of multiple trails ranging from hard to heart-attack-inducing. We got there via rental car, which we kept for the remainder of the trip. That said, Chile's public buses are clean, efficient and inexpensive.

The town of Pichilemu and its beach Punta de Lobos attract the world's most daring surfers. We were not among them. I balked once I learned I would need a wet suit. Try looking cute in one of those. Unless you're Cameron Diaz, it can't be done. My daredevil husband took lessons from the proprietor of our hostel but was paralyzed by the frigid water.

Even in the springtime, the Arctic current keeps Pacific temperatures in the 50s. Veterans weren't fazed, and we enjoyed watching them (as well as the basking seals) as we hiked the cliffs and biked along scenic roads.

Pichilemu, itself, is kind of trashy — empanada stands, bars, souvenir shops hawking Pinochet coffee cups, which I thought was kind of weird. I mean, the gift shops of Germany don't sell Hitler mugs, do they?

Personal victory: Keeping the Hitler crack to myself.

Thrilling diversion: "Two and a Half Men" really isn't funny, unless you are hanging out in a surf hostel with a British IT nerd and Australian twins and you are sharing your fifth bottle of wine. Then it's hilarious.

Resort, working farm, cooking school and summer home to chef and cookbook author Ruth Van Waerebeek and poet and wine lover Vicente Escobar, Mapuyampay was the ideal place to end our vacation. I spent my final days sleeping by the pool, reading Chilean writer Roberto Bolano, eating gourmet dinners and drinking wine expertly chosen by our innkeepers. Expertly because Van Waerebeek is the house chef of Chile's best-known winery, Concha y Toro. On our last day, we took a full-day Chilean wine and food class where we prepared a traditional Chilean barbecue of quince-basted pork tenderloin, scallop risotto, pureed peas and, as nod to her Belgian roots, chocolate mousse in fresh fruit soup. Each dish was paired with exceptional wine. Van Waerebeek did not disagree with Zac's assessment of Chilean dining; Chile lacks a thriving restaurant culture of, say, France. Home cooking is another story, especially when the home belongs to Van Waerebeek.

Personal victory: Waking up with only a wee hangover.

Thrilling side trip: Van Waerebeek will arrange horseback riding, cycling and rafting trips for the ambitious. We opted for rafting and wouldn't you know it, I had to wear that wet suit after all.

Rescued Chilean miners may still be trapped in lives

COPIAPO, Chile • Carlos Bugueno is out of the collapsed mine but still lives in close quarters, sharing his small wood-and-tin house with 16 r…

Comfortable walking shoes are a must in Valparaiso, which is built almost perpendicular to the Pacific Ocean. Photo by Bill Keaggy

The colorful homes of Valparaiso are connected by a maze of steep stairwells and cracked sidewalks. Don't listen to tourist who dismiss Valparaiso as shabby. The city is Chile's cultural heart and soul. Photo by Bill Keaggy

The journey really is the destination in walking town Valparaiso. Whimsical murals cover almost every wall. Photo by Bill Keaggy