Subscribe
Read Today's E-Edition
Share This
Who needs Colorado? Here are 15 ski resorts in the Midwest
0 Comments
Share this
By Brian E. Clark Special to the Post-Dispatch

Derek Stagner, president of the Hidden Valley Ski Team, says he he’ll do most of his skiing at the resort near Eureka this winter.

But he’ll also be making some trips north to ski and watch races in Iowa, Illinois and Wisconsin. Members of the team may also go to training camps at resorts in Minnesota and Michigan’s Upper Peninsula.

“The Midwest actually has a lot of fun places to ski and ride,” says Stagner, 52, whose 16-year-old son, Logan, is a member of the team. The Stagners live in Webster Groves and will be enjoying the 40th anniversary celebrations this season at Hidden Valley (hiddenvalleyski.com).

Hidden Valley has a vertical drop of 320 feet, seven lifts, 17 trails, one terrain park and snow tubing. It hopes to open Dec. 16, said Pam Hoye, a spokeswoman for Vail Resorts, which bought Hidden Valley in 2019. Because Hidden Valley began operating in 1982, she said the 40th anniversary festivities will have an 80s theme.

When the Stagners head west this winter, they might ski in either Colorado or Utah. With an Epic pass (epicpass.com), they’ll be able to ski at one the 40 areas that Vail Resorts owns around the globe, including Hidden Valley, Wilmot in southern Wisconsin and Afton Alps near St. Paul, Minnesota. In addition, pass holders can get 20 percent off food, rentals, lessons and lodging. Adult lift tickets are $51 midweek and $65 weekends.

Here’s the rundown on more than a dozen other resorts in the upper Midwest that St. Louis-area residents might want to try, including information on what’s new this season.

Chestnut Mountain (chestnutmtn.com) near Galena, Illinois, is 320 miles from St. Louis. The resort is perched on bluffs above the Mississippi River and has a vertical descent of 475 feet, nine lifts, 19 runs, snow tubing, the seven-acre Far Side terrain park and a nice hotel. New this year is additional snowmaking. It honors the Chestnut and Indy passes, charges $45 midweek for an adult ticket and $68 on weekends.

Sundown Mountain (sundownmtn.com) near Dubuque, Iowa, is also 320 miles from St. Louis. It has a vertical descent of 475 feet, six lifts, 21 runs and a terrain park. The resort upgraded snowmaking this year. It honors Sundown and Indy passes. Adult lift ticket prices are $36 midweek and $55 weekends.

Wilmot Mountain (wilmotmountain.com) is 65 miles north of Chicago just over the Wisconsin border and 335 miles from St. Louis. It has a vertical descent of 230 feet. The resort has nine lifts, 23 runs, 1 terrain park and snow tubing. It honors Wilmot and Epic passes. Adult lift tickets are $69 weekdays and $89 weekends.

Cascade Mountain (cascademountain.com) near Portage, Wisconsin, is 389 miles north of St. Louis. It has 11 lifts, a vertical drop of 480 feet, 48 runs, three terrain parks and snow tubing. New this year is a four-person lift replacing the three-person, Mogul Monster chairlift, which dates to the 1980s. The resort honors the Cascade and Skiing Wisconsin Passport passes. Adult lift ticket prices are $79 midweek and $89 weekends.

Tyrol Basin (tyrolbasin.com) near Madison, Wisconsin, is 383 miles from St. Louis. It has a vertical drop of 300 feet, five lifts, 18 runs, one terrain park and snow tubing. The resort, which is celebrating its 65th anniversary, honors Tyrol Basin and Indy passes. Adult lift ticket prices are $50 midweek and $60 weekends.

Granite Peak (skigranitepeak.com) outside Wausau, Wisconsin, is 492 miles from St. Louis. It is one of the largest resorts in the Badger State and has a vertical drop of 700 feet, seven lifts and 58 runs. The resort upgraded its snowmaking system, purchased a new groomer and added to its Rossignol ski and snowboard rental fleet. It honors the Granite Peak, Indy and the Legends passes. Adult lift ticket prices are $95 midweek and $105 on Saturdays and holidays. Advance-purchase tickets are up to 20 percent off.

Afton Alps (aftonalps.com) near St. Paul, Minnesota, is 530 miles from St. Louis. It has a vertical drop of 350 feet 18 lifts, 48 runs and one terrain park. All four resort chalets have been refreshed. It honors the Epic pass. Adult lift ticket prices are $69 midweek and $89 weekends.

Mont Ripley (mtu.edu/mont-ripley) in Hancock, Michigan, is 677 miles from St. Louis. It has a vertical drop of 440 feet, four lifts and 24 runs. The resort, which is part of Michigan Technical University, has reopened two runs — Deer Track Trail and Powder Stash — that were washed away in a 2018 huge rain deluge that left a 500-foot-long, 300-foot-wide and 50-feet deep hole. Adult lift tickets are $60.

Lutsen Mountains (lutsen.com) near Grand Marais, Minnesota, is 772 miles from St. Louis. This resort, which some consider to be the most like any Western resort in the Midwest, has an 800-foot vertical descent and two-mile-long slopes perfect for cruising. It sits above Lake Superior, has 62 runs and eight lifts —  including a gondola — spread over three mountains. It honors the Lutsen, Indy and Legends passes. The biggest change this year is the renovation of the popular Papa Charlie’s restaurant, which was remodeled and expanded to create a casual fine dining experience at the Legends. Longtime fans will still be able to enjoy their apres ski time, happy hour, music and bar experience on the tavern side of the building. In the plans for next year is a high-speed, six-person lift on the Bridge Run. Adult lift ticket prices are $95 midweek and $105 on Saturdays and holidays. Advance-purchase tickets are up to 20 percent off.

Ski Brule (skibrule.com) near Iron River, Michigan, is 612 miles from St. Louis. It has 11 lifts, a 500-foot vertical descent and 17 runs. The resort has upgraded its snowmaking.  Ski Brule, which is part of a 3,000-acre resort, also offers cross-country skiing, snowshoeing and fat bike trails. Adult lift tickets are $70, midweek and weekends.

Snowriver Mountain (snowriver.com) near Wakefield, Michigan — which combines Jackson Creek and Black River Basin resorts — was purchased by Midwest Family Ski Resorts this fall. Snowriver is 694 miles from St. Louis. It has 15 lifts and 56 runs spread out over its two mountains. The new owner has pledged to spend millions of dollars to upgrade the resorts, which have lifts dating to the 1960s. Work this fall includes lodge and room remodeling, a renovated cafeteria and the addition of 25 state-of-the-art SMI snowmaking guns. The resort honors Legends, Indy and Snowriver passes. Adult lift tickets are $69 midweek and $89 weekends. Advance purchase tickets are up to 20 percent off.

Big Powderhorn Mountain Resort (bigpowderhorn.net) near Bessemer, Michigan, is 700 miles from St. Louis. It has a vertical drop of 600 feet, 10 lifts and 45 runs.

Whitecap Resort (whitecapresort.com) near Upson, Wisconsin, is 628 miles from St. Louis. It has a vertical descent of 400 feet, five lifts and 43 runs. It has renovated some of its hotel, added a magic carpet surface lift to its novice area and purchased a snow grooming machine. Adult lift ticket prices are $70 midweek and $80 weekends.

Mount Bohemia (mtbohemia.com) resort near Copper Harbor on Michigan's Keweenaw Peninsula is 716 miles from St. Louis and bills itself as a wilderness escape because it does no snowmaking or slope grooming. But it has the greatest vertical descent in the region at 900 feet, as well as exciting cliff drops and chutes. It sits above Lac La Belle and is only a long stone’s throw from Lake Superior. The resort added two new trails — Fireball and Triton — this season in the Outer Limits section of the mountain, plus another room in its lodge. The only way you can ski or snowboard on Saturdays is if you hold a season pass, which is on sale through Dec. 3. It costs a mere $99, one of the best deals in the ski industry. Bohemia has two lifts, a spa with a eucalyptus steam room, a nine-person yurt, a lodge, restaurant and a hostel that costs $60 a night, including dinner. Adult lift tickets are $87.

There are certain tell tale signs that you're ready to retire

There are certain tell tale signs that you're ready to retire

The consequences of smoking before surgery

The consequences of smoking before surgery

Healthy lifestyle may reduce risk of long COVID, according to study

Healthy lifestyle may reduce risk of long COVID, according to study

For a golfing vacation, Branson is a 'world-class destination'

Big Cedar's five courses plus five others in Branson make it a great destination for any level of golfer.

Our readers love to travel, especially now that we feel a little safer. If you've been on a vacation lately, we'd love to see a photo. Send on…

Free hotel breakfasts are getting bigger and better

While some travelers cringe at the thought of greasy sausages and bland eggs served at the free hotel breakfast buffet, others say free breakf…

Bring it on home: Switzerland

Our readers love to travel, especially now that we feel a little safer. If you've been on a vacation lately, we'd love to see a photo. Send on…

Wisconsin's House on the Rock is amazing, bewildering

This attraction slowly transforms from an actual house on a rock into a menagerie of unrelated displays in mammoth, dark cavernous rooms witho… 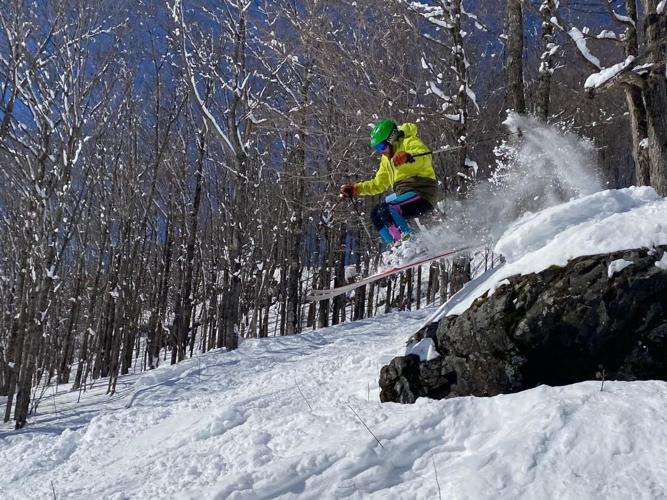 A soars off a small cliff at Whitecap Mountains in northern Wisconsin, just a few miles from Lake Superior and  the border of Michigan's Upper Peninsula. 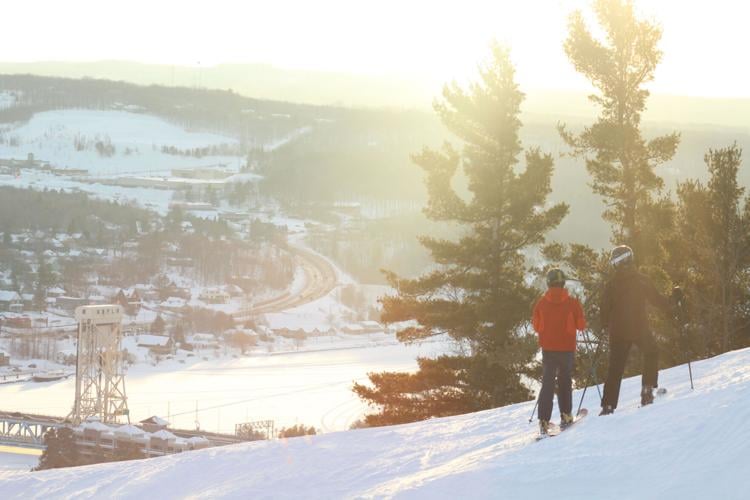 Powder skiing at Mont Ripley, a ski resort in the Upper Peninsula of Michigan. 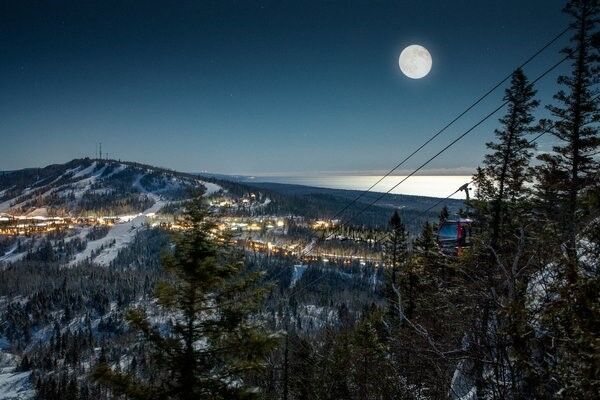 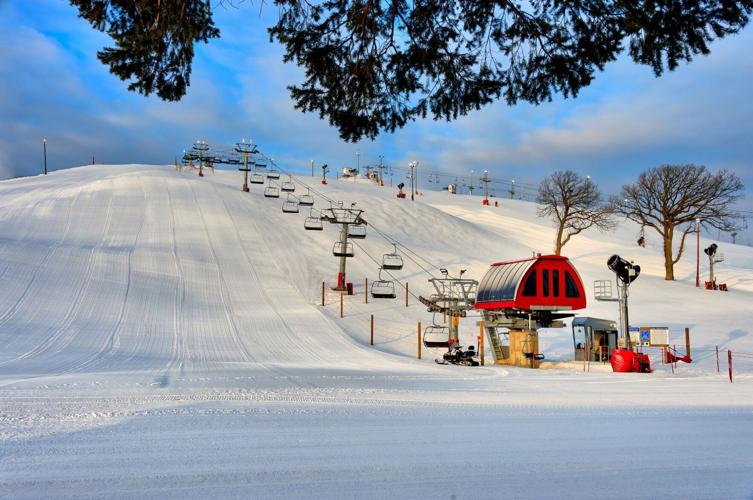 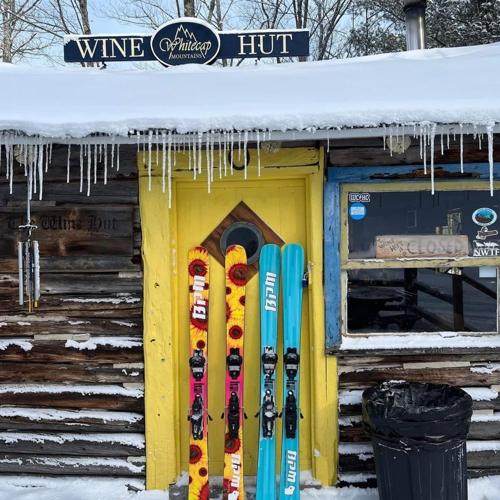 With its three decks, the Wine Hut at Whitecap Mountains is a popular stopping place at the resort for food, snacks and drinks 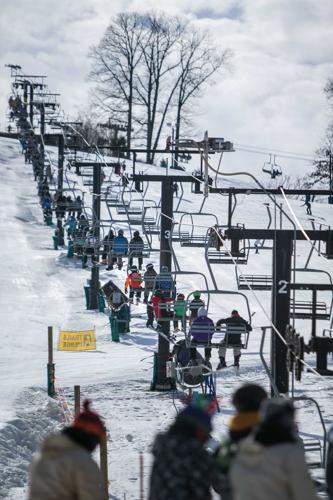 Skiers and snowboarders wait to ride the Ozark chairlift to the top of Lauren's Lane on Jan. 9, 2022, opening day at Hidden Valley in Wildwood.